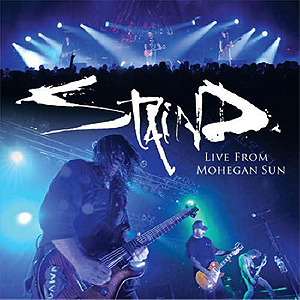 Listening to the 16 tracks that make up “Live from Mohegan Sun” is like having 16 consecutive meals comprised of nothing but lunch meats. Sure…it’s pretty yummy at first, but you quickly get to the point where you crave something different. Perhaps a steak. Or a caesar salad. Or a spicy burrito. Hell, even a Twinkie would do.

The main man behind Staind’s deli counter, Aaron Lewis, seems to know three vocal modes: an Eddie Vedder-ish vocal that’s tonally limited, a raging raspy scream that’s become an anger rock cliché, and a German death metal-ish low guttural croak that, despite seemingly evil intentions, fails to be menacing. To his credit, Lewis gives it all of the energy he’s got for the whole show, but it all becomes repetitive and rather boring about four songs in.

The musicians behind Lewis aren’t exactly master chefs in the tonal variety bistro either. They’ve got two menu items to dish up: hush-hush quiet or rampaging with standard-issue power chord riffs that are incessantly matched by on over-amped double-kick bass drum – and there’s far more of the latter than the former on display here. Adding to the frustration is that, whenever the band is in full-out, ball-crushing rocker mode, the overall mix suffers from an extreme amount of digital clipping. In fact, it’s so jarring that it might even bother non-audiophiles. (Yep, kids…put Staind’s “Live at the Mohegan Sun” just below Metallica’s “Death Magnetic” on the list of “loudness wars” victims.)

The net result of all of this is a jam-packed 74+ minute disc that ultimately fails to be interesting despite all of the energy that’s been channeled into it. Even though Staind has been in the alternative angst rock game for a long time, both Maynard James Keenan-fronted bands – Tool and A Perfect Circle – make for far more intriguing listening. While Aaron and his guys serve up sliced turkey, Maynard’s bands cook up a cornucopia of tasty cacophony that challenges the palette and nourishes the ears.

At one point during the show, Lewis asks the crowd “Who’s smoking weed?” We will probably never know who the mystery toker was, but I do know one thing: that person is smart enough to know that when you’re force fed enough baloney, one good option is to become an herbivore.

Filed Under: CD Reviews Tagged With: Aaron Lewis, It's Been Awhile, Johnny April, Live from Mohegan Sun, Mike Mushok, Outside, ...