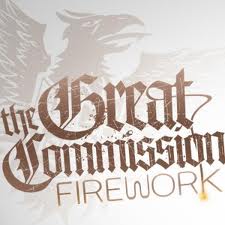 The “Firework EP” is the latest release from the Riverside, California band The Great Commission. The EP features 5 acoustic renditions of songs which were originally included on the bands 2011 full length album titled “Heavy Worship”. The EP also features a beefed up metal version of Katy Perry’s song “Firework”. Being a huge fan of the bands full length album I was really excited to hear what was in store on the new EP. From the opening vocal lines of “When It Rains It Pours” I was completely blown away! Each member of the band shows a whole new side of their music abilities. Lead vocalist Justin Singh unveiled an entirely different vocal styling that what fans are a custom to. Singh voice coupled with guitarist Angelo Razo’s angelic back-up vocals really brought the acoustic tracks to life. The bands upbeat cover of “Firework” wasn’t bad however it just wasn’t to my liking. I think the song would have been more to my liking if they had gone either full pop or full metal. Not teeter between the two styles.
Bottom line The Great Commission is more than just another faith based scream-o type band and the “Firework EP” proves that.

One Reply to “CD Review: The Great Commission “Firework EP””