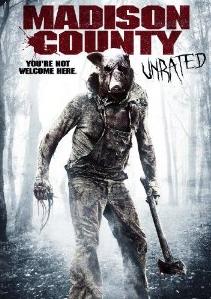 When you have a film boasting a killer with a pig on his head, immediately I can’t help but want to immediately watch this. The film doesn’t break any new boundaries in horror but does setup some decent suspense and great kills. Nick Princpie aka Chromeskull from “Laid to Rest” series, kicks ass in the masked role. The rest of the cast is impressive as well Joanna Sotomura and Ace Marrero look to have a great career in the cards. I also look forward to future work from director Eric England. I only wish that there would have been more back story on Madison County itself and its masked killer.

The film follows a group of college kids who travel to a small town of Madison County in order to interview an autho, who authored a book about the murders that happened there. Of course when the kids get there, the author is nowhere to be found and the towns people act like nothing has ever happened. Of course that doesn’t stop the kids, who start investigating but might not like what they find as they may have gotten themselves in too deep.

The special features aren’t as good as the film is unfortunately. There is an audio commentary track with writer/producer/director Eric England, producer Daniel F. Dunn and actor/producer Ace Marreo, it is busy but entertaining and informative. There is a roughly 20 minute Q&A from Screamfest, worth checking out if you enjoyed the film.  Lastly included is a theatrical trailer for the film.