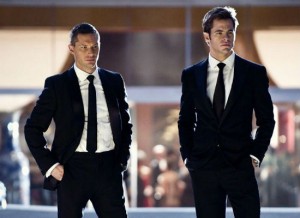 Last week’s “Safe House” gave us a pair of spies that got down and dirty. This week, the boys from the C.I.A. are much more glamorous.

High atop a Hong Kong skyscraper, FDR (Pine) and Tuck (Hardy) are on a mission. They’re assignment is to capture an elusive baddie named Heinrich (Til Schweiger) as covertly as they can. Too bad neither of them seem to understand the word “covert.”

Smartly written and cleverly directed by action maestro McG, “This Means War” is a fine combination of romance and comedy with a little bit of action thrown in for good measure. As best friends and partners, Pine and Hardy have a natural chemistry and obvious comradeship that radiates from the screen. Pine, with the same “bad boy” twinkle in his eyes that made him a perfect Captain Kirk in “Star Trek,” plays FDR as the typical free and easy bachelor. He has a sweet sports car and a sweeter apartment (apparently the spy game pays very well). His cover identity is that of a cruise ship captain, which allows him to be anywhere in the world at anytime. As divorced dad Tuck (his ex-wife couldn’t believe she married the only travel agent that actually travels), Hardy shows another facet of his talent by proving himself a gifted comedian. I really can’t rave any more about Tom Hardy then I did last year in my review of “Warrior.” Suffice it to say this guy can apparently do it all.

Bored with his personal life, Tuck arranges to meet Lauren (Witherspoon) after seeing her on an Internet dating site. The meeting goes well but, as she’s heading home, Lauren meets FDR in a video store. Soon, unknowingly, both men find themselves infatuated with the same woman. When they discover this, they use the agency and their underlings to spy on Lauren. They agree to a gentleman’s bet, vowing to step aside if Lauren shows feelings for the other. But as each man find himself drawn to Lauren the lengths they will go to in order to win her heart grow more and more ridiculous. Soon the two are more interested in topping one another than finding the dastardly Heinrich. But not to worry… Mr. Heinrich will find them.

McG has done some amazing action work in films like “Terminator Salvation” and the “Charlie’s Angels” series. Here, like in “We Are Marshall,” he finds the human side of the camera, inviting us to meet and enjoy being around these characters. But that’s not to say that the action-crazy McG isn’t in the house! He’s here…and in as fine a form as ever.

The supporting cast also does well, especially Angela Bassett as the two friends’ boss and Chelsea Handler as Lauren’s friend and advice giver. I’ve read that some of Handler’s more “R” – rated comments were cut from the film to ensure the “PG 13” rating. May have to wait for the DVD to hear what I missed.