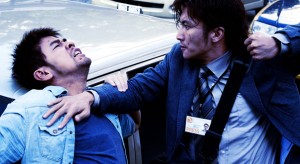 It would be fair to say that the majority of great action films have taken their cue from the creators of Asian Cinema.  Directors like Tsui Hark, John Loo and Ringo Lam have influence American directors like Quentin Tarantino, Robert Rodriguez and the Wachowski brothers.  Add to the list director Dante Lam who, with “The Viral Factor,” may have created the best action film of 2012.

As the film begins we learn that, though it was thought that Smallpox had been eradicated from the planet decades ago, a scientist had found a way to mutate it into an even deadlier virus.  Hoping to keep the scientist out of enemy hands, a group of agents from International Security Affairs attempts to escort him and his family to safety.  Betrayed by one of their own, the agents find themselves under attack.  During the firefight, Jon (Chou) is shot in the head, hit by the same bullet that also kills Ice (Bai), his fellow agent and girlfriend.  Jon is told that, because of the location of the bullet, surgery would be useless.  He is also told that the constant brain pressure on the bullet will cause him to be paralyzed in two weeks.  Jon goes home to inform his sick mother but, before he can tell her, she tells him that the father he thought had abandoned the family is still alive…and that he has an older brother, Yeung (Tse).  She begs Jon to find them.  And so the adventure begins.

Beautifully shot in such exotic locations as Malaysia, Hong Kong, Jordan and Singapore, “The Viral Factor” is two hours of non-stop, kick ass action.  The main plot consists of an arms dealer hoping to get his hands on the smallpox virus, create a vaccine for it, and then infect just enough of the population so that the demand for his vaccine makes him wealthy.  While searching for his father Jon recognizes one of the men that ambushed his group.  A spectacular fight inside a moving car takes place with Jon pretty much on the losing side.  But, right before he puts a bullet in Jon’s head the baddie  catches a glimpse of a photo in Jon’s wallet featuring Jon and his mother.  Did I mention Jon had an older brother?

The action sequences are incredible.  Though there is a little bit of camera trickery the majority of the action is live and man to man.  According to a story I read, lead actors Chou and Tse were insured for a combined $150 million to ensure if they were hurt the film would continue.  I’m not sure what the premium for that coverage was but it was truly money well spent.  The film moves quickly, thanks to director Lam’s flowing camera work and sharp editing.  The acting is also strong, especially Chou, who was the best thing about last year’s “Green Hornet.”  Chou has announced that “The Viral Factor” would be his last action film.  If this is true he’s going out on top!