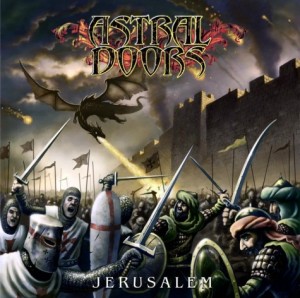 “Jerusalem” produced by Daniel Bergstrand is the 6th and latest  full length studio album from the metal group Astral Doors. “Jerusalem” is the follow up to the bands 2010 release titled “Requiem of Time”. The album is being released via Locomotive Music.

Fans of classic metal will definitely want to take a listen to “Jerusalem”. The album is packed full of straight forward metal riffs and vocals that are very reminiscent of the late, great Ronnie James Dio. The album features 11 new studio tracks that from the very start of the album captivated me as a listener. Tracks such as “Children of Rock N’ Roll”, “Lost Crucifix” and the acoustic tinged “The Day After Yesterday” I felt really showcased what the Astral Doors has to offer. The overall mix of the album I thought sounded great as it really complimented the playing of the band.

Heavy metal purists may be quick to accuse the band of merely copying what has previously been done however “Jerusalem” is much more than that. This album is an updated take on the classic metal albums fans of the genre grew up on. Yes the sound of the band may be a bit dated in terms of the new metal material being released these days but that doesn’t stop this album from being a solid all around metal album.