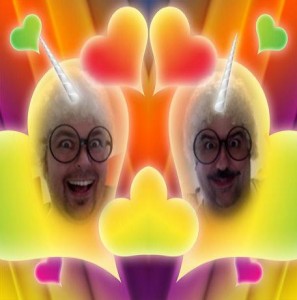 Andy Sipes & Dana Snyder are the guys behind the AdultSwim.com’s latest web series “Songs for Helping”. It is about angels that give bad advise to people through songs. Andy is known for his work on Adult Swim with “Minoriteam” and “Saul of the Mole Men”. Dana is known for voicing various character on Adult Swim like Master Shake in “Aqua Teen Hunger Force” and “Granny” from “Squidbillies”. Media Mikes had a blast chatting with the guys about this web series and what we can expect from the episodes.

Mike Gencarelli: Tell us about your new web series “Songs for Helping”?
Andy Sipes: We wanted to come up with something like a “Dear Abby” column. We thought that was a funny place to start and we are big fans of musical parodies. So we figured we can a really jerky little angels that sing and give terrible advice.
Dana Snyder: Whatever he said…I say that. But it was probably just me since I thought of it.
Andy Sipes: [laughs]

MG: This is your third/fourth project now, what keeps you guys working together?
DS: An unfortunately string of bad decisions…mostly on Andy’s part. He usually says “This is the last time Dana and never again”. Then somehow I find a way to finagle him in [laughs].

MG: How many episodes can we expect from the series?
DS: Right now we are going to have nine. There will be a new one every week at http://adultswim.com/songs every Monday…unless AdultSwim.com is on a vacation day then it would be Tuesday. So it probably means every single week it will be up on a Tuesdays [laughs].

MG: How long does each take to complete to develop?
AS: The first season was a little bit of trial and error. We really only had a rough idea of what the series would be. We tried a number of different things.
DS: We tried everything from live action on green screen. We tried every possibility on what we thought we could do [laughs].
AS: We decided we have these character designs that Dana did and we decided just to do a straight animated show. We know a lot of really good people that helped us. It was really a fun process overall.

MG: What it always planned as a web series?
DS: Yes.
AS: Yeah we have talked about developing it further. We love it as a little one and half to two minute song that you can pass on to your friends.

MG: Who is doing the actual singing in the songs? Why didn’t you sing the songs yourself?
AS: That is all Mike Geier. He did all the music and does all the singing.
DS: No reason why. Mike is great, I have done a lot of live shows with him. He is an incredible musician and singer. We though it would be funny to have the other angel, whose name is Bert, would do all the singing but never actually speak [laughs].

MG: Tell us about what we expect from future songs?
AS: Get ready though because the songs get more increasing bizarre as we go.
DS: The two songs that are up now are the first ones we ever thought of.
AS: When picking which order they would air…I think we figured that these two wouldn’t scare people off [laughs].
DS: [laughs] You don’t wanna dive in first with the songs about someone who has a permanent erection. Better to save that for a little later.

MG: Dana, you also worked on the character design; tell us about that process?
DS: Well, that is a very good question. Mostly I was sitting across from Andy in our office and then giggling because I tried to draw it better but not having anyone to draw it for us. [laughs]. I thought “Ha, how hard can it possibly be”…it was pretty hard. I am not going to lie…it took a lot of time.
AS: I think that was always the plan for you to sketch something out real quick and then we will get a real artist to draw. Then we said “Wait a second, these are really good… let’s just use these”.
DS: Yeah we keep looking at them thinking that these guys looked like such little jerks [laughs]. The finishing touch was putting them in gold high heels. I don’t know why but I think it does finish it off quite nicely.

MG: What do you each of you like most about working on this project?
DS: Well I think for this one especially is it was very exciting because we would have these concepts and ideas but then all of sudden getting it back from Mike (Geier) and it is this whole complete song. It sounds like a real song…not like something we could have done. That was super exciting. Then on top of that were sending the song to our animators for the second thrill. It was great seeing what the animators did with it. They said “Yeah we threw it come crazy rainbows” and we were totally digging it.
AS: I think with Dana and I and our experience with what we have done, it was really great to see something start to finish like this that we wrote and created. That is the best thing in working in the entertainment business. We were 100% happy with it.
DS: I also think we didn’t have a lot of people involved with this. But everyone we did have involved added to this a lot. While passing through everyone’s hands, it just got better and better for us as well as more interesting and funny.

MG: Dana, When do you start-up on season 9 of “Aqua Unit Patrol Squad 1”?
DS: I actually just recorded two episodes earlier this week. They were really good. Then I also got a new “Squidbillies” upcoming. I do believe that they are almost starting new “The Venture Brothers”. I think it is coming really soon also.

MG: Andy, after this web series, what do you have planned next?
AS: I am writing a script right now with my writing partner, Matt Mariska, for Comedy Central. It is a half-hour sitcom. Then I am just pitching around town to whomever would take a meeting with me.
DS: Literally throwing baseballs at them. You actually have to go to the local park to see his pitching.