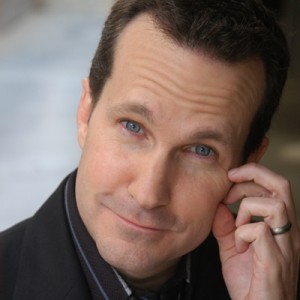 Jimmy Pardo is known for his work with Conan O’Brien on his TBS show “Conan” and his bit called “Pardo Patrol” on the show.  Jimmy has been running a podcast since 2006 called “Never Not Funny. Jimmy just held his 3rd annual Pardcast-a-thon fundraiser to benefit Smile Train, They raised over $42,000 this year, blowing away their goal of $27,000. Media Mikes had a chance to chat with Jimmy about working with Conan and what he has planned next.

Mike Gencarelli: Can you tell us what it’s been like working with Conan O’Brien?
Jimmy Pardo: I started with him at the Tonight Show when they first moved out to New York. I had never met Conan prior to this and the way the story goes is that they were looking for someone to do 10 minutes of comedy to warm the crowd up prior to the show starting. They had been using writers and some other people prior to my hiring. Andy Richter who I knew a little bit threw my name in the mix as he though I have the same sensibilities as the show. They I guess looked at some of my stuff online and called me in for a meeting and offered me the job. I worked there for the 7 months we were on the air. When the show moved I was lucky enough to be asked to do the same position.

MG: What can you tell us about the Pardo Patrol?
JP: That goes back to the Tonight Show as Conan, Jeff Ross and Mike Sweeney were always looking for something more for me to do. They often joke that I am slumming it opening for their show. When the whole Team Coco thing happened and after the website became popular we had been on TBS for about 4 months or so when they said we should have some original content on there. Conan who had been a guest on my podcast a few times said we should have me do something. There really wasn’t any idea behind but we started doing the Pardo Patrol’s which are pretty open ended. They could be anything and everything. I am grateful and love doing it. It’s great to be part of the team. It’s flattering to have my own thing on the Team Coco website.

MG: What do you like most about doing your podcasts?
JP: I started doing those around 2006 when they were just starting. No one had a clue what a podcast really was at the time. I did them as something to do between jobs. I don’t know if it was the timing or the quality but people took a liking to the show. Everyone is doing them now and I really enjoy it.

MG: The podcast recently finished it’s ninth season. How do you continue to keep it fresh and keep people listening?
JP: There is only so much talent in the pool that we all draw from. What I am trying to do is find people who aren’t yet part of the comedy scene we all draw from. I try to get people who my audience may never expect to be on my show. By doing this I as well as the audience am getting to hear new people. New faces keep it fresh.

MG: Are there any special plans for Conan’s taping at the Beacon Theater?
JP: I don’t really know what going on just yet. I am supposed to be there on Saturday, October 29th. We do our first show on the 31st and I am sure there are a lot of fun things planned. I think everyone who is going to the shows will be thrilled to be there and it’s going to be great.

MG: Can you tell us about Bob and Tom Comedy All-Stars Tour?
JP: I have been going out on those tours since 1990. I was a guest on their show when they were just based out of Indianapolis. They took a liking to me early and became a friend of the show. They would always have me on when I was coming through town and they had me call in a lot as well. I have been able to go to the Bahamas with them for their Super bowl parties and it’s been great. The tours allow the fans to put a face to the voices they hear on the radio.