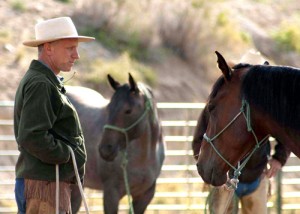 You probably don’t know it but you’ve heard of Buck Brannaman. Maybe not by name, but certainly by reputation. Brannaman is the man they call “the Horse Whisperer.” In fact, he was the inspiration for the popular novel by Nicholas Evans of the same name. He served as a consultant and technical adviser for Robert Redford on the film version of the book. Now Brannaman himself is featured in the new documentary simply titled “Buck.”

A true cowboy, Brannaman has been around horses his entire life. As a young man he and his brother, Smokie, were popular entertainers at local rodeos, thrilling the crowds with a variety of rope tricks. The boys were so popular that they were featured in a television commercial for “Sugar Pops” cereal. (Note to readers born after 1980: believe it or not, sugar used to be a good thing. As a kid I was treated to such tasty cereals as “Sugar Crisp,” Sugar Frosted Flakes” and, as previously mentioned, “Sugar Pops.” You can still find these products on your grocer’s shelves, now labeled “Golden Crisp,” “Frosted Flakes” and plain old “Corn Pops.”) What the public didn’t know was that the boys were raised by an abusive father. As Buck tells it, “my dad gave us the choice of practicing roping tricks or getting whipped,” The abuse grew so bad that the boys spent many years in foster homes. But it is this upbringing that leads Buck to his calling. His job: to help horses with people problems.

Beautifully photographed (I have no idea if documentary films are eligible for academy awards outside of their category but if so “Buck” is on my short list for this year’s best cinematography), “Buck” shows life at its most simple level. His love for horses is unyielding as is his way with them. If a horse will not allow itself to be broken it is because “humans have failed him.” As he approaches a horse his tone is quiet; barely a whisper. When his face is inches away from the animal he looks into its eyes, which he refers to as “a window to your soul.” There apparently isn’t a horse that he can’t tame, and he does it with love, not a whip. The film also takes a look at Buck with his family. These are some of the film’s best scenes, especially the ones that feature Buck and his youngest daughter, Reata, who is practicing to be a championship roper herself.