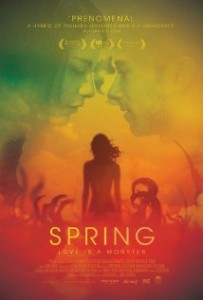 “Spring” is a movie that is barely – just barely – saved by its beautiful scenery. In fact, if it weren’t for the film’s location, there wouldn’t be much here to watch.

After the death of his mother, Evan (Lou Taylor Pucci) finds himself lost, and needing more from life. A drunken altercation in a bar leads him to be wanted by the local police, so he flees to Italy. He finds a job as a farm-hand, and meets a mysterious young woman, Louise (Nadia Hilker). With a complete lack of chemistry between the two main characters, and a unappealing performance by Pucci – which leaves Evan unlikeable, or just mediocre – this story falls into a series of humdrum scenes with nothing but conversations full of platitudes.

Slowly the “horror” elements begin to build, but even here too much is shown far too soon. There is almost no anticipation, and no mystery at all. There are questions, but no suspense. Too much is given away too early, and the film is never able to fully explain or payoff what it tried to set up. It’s not scary, and it’s not enigmatic. It’s just dull.

The film is part horror, part comedy, and part love story. But none of those elements are built upon enough to really call this film any of those. It’s not a horror movie; it’s not a comedy; and it’s not a romance. It falls flat from beginning to end. The cinematography helps the film a great deal; but even most of that work was done by having a great setting. No matter where they put the camera the location was beautiful.

It’s easy to see what the filmmakers were intending to do, but it doesn’t quite hit the mark. The performance by Hilker was the best of anyone in the film; it seemed that she could have gone much further with her character, if she had a stronger male lead to act opposite of.

At times the scenes intended to be suspenseful or eerie, were funny. And the attempts at humor didn’t land as well as they should. And again, the romance was lacking due to poor chemistry.
A fresh attempt at an horror cliche here just leaves the audience confused as to how they are supposed to feel.

Overall, this film just felt uneven. Within the same scene the characters’ emotions change wildly, with out any real motivation as to why. I can’t suggest seeing this film in theatre, but wouldn’t be a waste of time if caught on VOD.