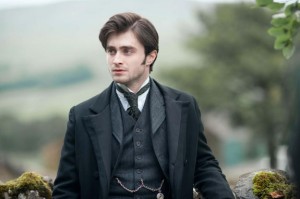 England in the 1900s. Three little girls are playing in the attic. They are suddenly joined by a ghostly vision. Without hesitation, the three children climb up onto the windowsill and jump to their deaths.

Arthur Kipps (Radcliffe) is a young attorney whose about to lose his job. A single father (his wife having died giving birth – which really seemed to happen a lot back then if you believe Hollywood), he is sent to settle the accounts of a recently deceased client. Seeing some quality time with his son may be available, he arranges for the boy and his nanny to join him later in the week. Perhaps this will improve his son’s image of him, as he is currently drawing pictures of his father with big frowns on his face. Upon his arrival, he is given a lift to town by the very wealthy Mr. Daily (Hinds). We know he’s wealthy because he owns the only automobile in town. Upon his arrival at the local Inn Kipps is told that the room he had reserved is no longer available. Despite the innkeeper’s protests, he is allowed to stay the night. In the attic. BOO!

Heavy on the atmosphere but also on the “scares” horror fans have learned to rely on (loud music, hand on the shoulder, the occasional bird that shows up out of nowhere), “The Woman in Black” is still a satisfying re-make of the well received 1989 film of the same name. Co-produced by Hammer Films, the film is a throwback to that studio’s heyday, when horror greats like Peter Cushing and Christopher Lee wandered through the fog in search of things. Radcliffe does the wandering here, roaming from room to room in the deceased client’s oversize house. “Don’t go chasing shadows,” he’s told. But if he didn’t, there wouldn’t be a movie. He learns that many years ago a young boy drowned in the marshlands after a wagon accident. Despondent, his mother went slowly crazy, blaming others for his death. Kipps finds some of her old letters, many of them including the words “you could have saved him!” He also finds himself blamed when other children in the town begin to die horribly. As he learns more about the past he realizes he must do something before his own son arrives.

In only the second film he’s starred in that didn’t have the words Harry or Potter in the title, Radcliffe gives a strong performance. He has grown into a good looking young man and should be able to prove to those that only think of him as the Boy Wizard that there is much more talent to be revealed. Hinds is fine as pretty much the only townsperson who believes Albert has seen…things. The direction is solid with the only drawback being the constant relying on the things that go bump in the night to make us jump. And for you fans of trivia, the role of Albert in the original film was played by actor Adrian Rawlins, who played Radcliffe’s father, James, in the “Harry Potter” films.