To celebrate the digital HD release of Season 6 of “Veep” and Season 4 of “Silicon Valley”, Media Mikes would like to give two of our fans a chance to win a digital HD copy of each season. If you want to win this great prize, please leave a comment below your favorite character from either of the two shows. This giveaway will remain open until August 4th at Noon, Eastern Time. This is open to our readers in US only. One entry per person, per household. All other entries will be considered invalid. Media Mikes will randomly select winners. Winners will be alerted via email.

In the sixth season of VEEP, we find President Selina Meyer (Julia Louis-Dreyfus) now out of office for the first time in years after her loss in a Senate vote to resolve an Electoral College tie last season. Forging ahead to secure her legacy and find her place in the world, while much of her staff pursues endeavors of their own, Season 6 finds Selina and her band of fellow misfits hilariously attempting to make their mark while navigating the political landscape in Washington and beyond.

The fourth season of Silicon Valley, the “incredibly funny” (Uproxx), Emmy®-nominated HBO comedy series from Mike Judge and Alec Berg, will be available for Digital Download on July 31, 2017, with Blu-ray™ and DVD release date confirmed for September 12, 2017. In the new season of the critically beloved show that probes the ripe-for-comedy world of Silicon Valley, Richard Hendricks (Thomas Middleditch) and his team of socially awkward underdogs continue to claw their way towards tech fame and fortune. Silicon Valley: The Complete Fourth Season on Blu-ray™, DVD and Digital Download features all ten episodes from Season 4, along with three hilarious, never-before-seen deleted scenes.

Change is in the air in Season 4 of Silicon Valley as the Pied Piper guys pursue their video-chat app, PiperChat, but Richard (Thomas Middleditch) has a hard time letting go of his dream to put his algorithm to better use. As Dinesh (Kumail Nanjiani) flirts with notoriety while Gilfoyle (Martin Starr) looks on in amusement, Erlich (T.J. Miller) searches for his next big break, Jared (Zach Woods) attempts to pivot with the company, and Big Head (Josh Brener) enters the world of academia. Over at Hooli, Gavin (Matt Ross) finds himself threatened by Jack Barker (Stephen Tobolowsky), while Monica (Amanda Crew) struggles to bounce back at Raviga after her fallout with Laurie (Suzanne Cryer). Sharp, irreverent and hilarious,Silicon Valley continues to lambast the self-important world of tech in a season that finds the Pied Piper guys looking to leave their mark, even as they continue to fumble along the road to success. 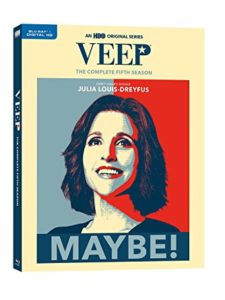 The fifth season of the political satire, “Veep”, aired in a very important year in our history. The year of the election that Donald Trump became out 45th President of the United States. The election was everywhere you turned. “Veep” is a very important show as well because how 6 ballsy it is and how much it pokes fun of politics yet extremely smart at the same time. Since come people considered this past election to be a joke, this show had a lot in common. This season was extremely strong showing that this show has no signs of slowing down. Season 6 airs this month!

Official Premise: Season 5 of the acclaimed comedy series created by Armando Iannucci finds Selina Meyer in the midst of a virtually unprecedented Electoral College tie – with her future as President coming down to only a few hundred votes. Selina finds herself spinning her wheels in D.C. as her staff continues their mission to make her seem presidential (even though she is the President) while fending off the ambitions of her charismatic Vice Presidential running mate who, through an obscure constitutional procedure, could end up being President. Veep continues to prove that in Washington, even the most banal decisions can have ripple effects – with unexpected and often hilarious consequences.

Along with the 10-episode season also included was a digital download copy of the full season. The special features are split over the two Blu-rays and worth checking out if you want more of this show’s zaniness. There are half hour of deleted scenes over the whole season span. Lastly there are four audio commentary tracks including on episodes 1, 4, 6, and 7. The tracks include star Julia Louis-Dreyfuss and also Executive Producer as well as Tony Hale, Reid Scott, Timothy Simons, David Mandel and more!

Normally, I would never find myself watching a political satire like “Veep” but I am so glad that I have since it is easily one of the best shows on TV right now. It is not only smart but hysterical at the same time. This show has been developed so well over its run and in it’s fourth season it is the best that it has been to date. The characters are fleshed out so well and only getting better. Can’t wait for season five to start!

Official Premise: Having become president after her predecessor stepped down, it remains to be seen whether Selina Meyer’s team will outlast that of America’s shortest-serving president, William Henry Harrison. With the stakes for Selina and her team higher than ever before, she must still run for election, and in the weeks to come they will grapple with how to make her seem “presidential.”

So since we are reviewing this season for digital HD, which was available since July 20th, there are still a good amount of special features included. Like the also recently released season for Silicon Valley, only thing missing that I would like would be commentary tracks. Included are two featurettes, exclusive, never-before-seen deleted scenes and a trailer. “Great Debates” includes some very funny moments from the season. “Invitation to the Set” features Julia Louis-Dreyfus and the cast previewing the season. 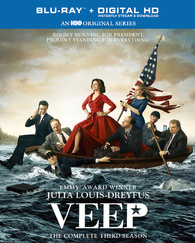 “Veep” is a show that I caught by accident one day and instantly fell in love with it. It is an amazing satire on the political world. Like “House of Cards” is a dramatic focus, this show is the comedic approach. Outstanding performances from everyone included in this Julia Louis-Dreyfus has never been better. As this show progresses, I feel that it is only getting better. I love the direction where season three followed and the only issue was that it didn’t last longer. I really hope that HBO keeps this show rolling for years to come because I know that this show will only get better and better. I can’t wait to see what they have in store for season four.

Official Premise: Veep follows the whirlwind day-to-day existence of Vice President Selina Meyer (Louis-Dreyfus) as she puts out political fires in her public and private life while launching her campaign for president after learning that the commander-in-chief will not seek reelection. In season three of Veep, Selina and her staff head off to meet America in Detroit and Silicon Valley, go on a drug bust with the Maryland Coast Guard, and fly to London to confer with heads of state. Meanwhile, as Dan and Amy battle for the role of campaign manager, everyone helps Selina define who she is and where she stands on fracking, education, reproductive rights and her hairstyle. With all of America now watching her and her team, even the most banal action can set off a ripple effect that has unexpected and far-reaching consequences.

HBO is releasing “Veep: The Complete Third Season” as a combo pack with a Blu-ray and Digital HD copy included. Like the first two seasons, the 1080p transfer and DTS-HD Master Audio 5.1 surround track are standard for a half-hour comedy. Nothing spectacular but also no issues either. The special features included are a little light in my opinion but working checking still just for the audio commentaries. The entire cast are on board for these tracks and they are a great reason to re-watch the season. I honestly can’t get enough of this cast together. The improv and bather between them are just so funny and always makes me laugh. Also included in the special features are some deleted scenes.

I have to admit, I wasn’t aware of this show until Julia Louis-Dreyfus’ Emmy win for Outstanding Lead Actress in a Comedy Series. I have not been the biggest fan of hers since “Seinfeld” but I figured it was worth a shot. I have also had a lifelong crush on Anna Chlumsky and I am glad to see her back in the spotlight again. This eight episode first season is actually very funny and sharply written. What I also like is that each episode runs only 30-minutes. I feel that it keeps you wanting more and keeps this tight. The good news is that if you like this show like myself, “Veep” has been renewed for a second season and is set to premiere on April 14, 2013. So stay tuned and be sure to pick up this Blu-ray to catch up.

If you like shows similar to “The Office”, they you will enjoy this show’s on-the-fly improv comedy. I think that it works really well for a show like this and makes it more unpredictable. The show is also a bit raunchy, which is why I think it also works so well.  Since in the world of politics, it is good to see things lighten up a bit. Julia Louis-Dreyfus really gets a chance to shine and give such an amazing performance in this show.  But of course the cast as an ensemble is really one of the main reasons this show works so well. The supporting actors including Anna Chlumsky, Tony Hale, Reid Scott, Timothy Simons, Matt Walsh and Sufe Bradshaw all have a big contribution to this shows success as well.

Official Premise: Former senator Selina Meyer (Dreyfus) was a rising star in her party and a charismatic leader who seemed to have unlimited potential. Some pundits thought she might even occupy the White House someday. Then she became vice president. Veep follows the whirlwind day-to-day existence of Vice President Meyer as she puts out political fires, juggles a busy public schedule and demanding private life, and defends the president’s interests, even as she tries to improve her dysfunctional relationship with the chief executive.

HBO has delivered a nice round release here.  The season comes packaged as a combo pack featuring their signature HBO Select. This gives you the option to watch this show three ways – Blu-ray, DVD or Digital Copy. For the digital copy, you can redeem on iTunes and Vudu, as well as other UltraViolet providers. The 1080p transfers on each episode looks really sharp even for its hand-held camera style. The show wit and snappy dialogue also work well with the included DTS-HD Master Audio 5.1 track for the episodes.

The special features here are damn impressive for a first season show. First up we have “The Making of Veep”, which is a basic behind-the-scenes look into this season’s production with cast and crew. “Veep: Misspoke and Obesity” are two funny PSA’s with Meyer covering her tracks. There are a few deleted scenes included. Some of decent but for a show like this I am sure that there are tons of extended and alternate takes. The score of this release and the real draw for me is the twelve…that’s right twelve audio commentary tracks. HBO does not cheap out on commentary at all much like their “Game of Thrones” releases. The tracks include the show’s co-creator Armando Iannucci, Julia Louis-Dreyfus, Anna Chlumsky, Tony Hale, executive producers Frank Rich and Chris Godsick, and more. If you enjoy the show then don’t miss these.