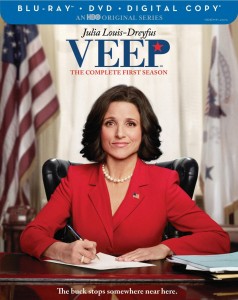 I have to admit, I wasn’t aware of this show until Julia Louis-Dreyfus’ Emmy win for Outstanding Lead Actress in a Comedy Series. I have not been the biggest fan of hers since “Seinfeld” but I figured it was worth a shot. I have also had a lifelong crush on Anna Chlumsky and I am glad to see her back in the spotlight again. This eight episode first season is actually very funny and sharply written. What I also like is that each episode runs only 30-minutes. I feel that it keeps you wanting more and keeps this tight. The good news is that if you like this show like myself, “Veep” has been renewed for a second season and is set to premiere on April 14, 2013. So stay tuned and be sure to pick up this Blu-ray to catch up.

If you like shows similar to “The Office”, they you will enjoy this show’s on-the-fly improv comedy. I think that it works really well for a show like this and makes it more unpredictable. The show is also a bit raunchy, which is why I think it also works so well.  Since in the world of politics, it is good to see things lighten up a bit. Julia Louis-Dreyfus really gets a chance to shine and give such an amazing performance in this show.  But of course the cast as an ensemble is really one of the main reasons this show works so well. The supporting actors including Anna Chlumsky, Tony Hale, Reid Scott, Timothy Simons, Matt Walsh and Sufe Bradshaw all have a big contribution to this shows success as well.

Official Premise: Former senator Selina Meyer (Dreyfus) was a rising star in her party and a charismatic leader who seemed to have unlimited potential. Some pundits thought she might even occupy the White House someday. Then she became vice president. Veep follows the whirlwind day-to-day existence of Vice President Meyer as she puts out political fires, juggles a busy public schedule and demanding private life, and defends the president’s interests, even as she tries to improve her dysfunctional relationship with the chief executive.

HBO has delivered a nice round release here.  The season comes packaged as a combo pack featuring their signature HBO Select. This gives you the option to watch this show three ways – Blu-ray, DVD or Digital Copy. For the digital copy, you can redeem on iTunes and Vudu, as well as other UltraViolet providers. The 1080p transfers on each episode looks really sharp even for its hand-held camera style. The show wit and snappy dialogue also work well with the included DTS-HD Master Audio 5.1 track for the episodes.

The special features here are damn impressive for a first season show. First up we have “The Making of Veep”, which is a basic behind-the-scenes look into this season’s production with cast and crew. “Veep: Misspoke and Obesity” are two funny PSA’s with Meyer covering her tracks. There are a few deleted scenes included. Some of decent but for a show like this I am sure that there are tons of extended and alternate takes. The score of this release and the real draw for me is the twelve…that’s right twelve audio commentary tracks. HBO does not cheap out on commentary at all much like their “Game of Thrones” releases. The tracks include the show’s co-creator Armando Iannucci, Julia Louis-Dreyfus, Anna Chlumsky, Tony Hale, executive producers Frank Rich and Chris Godsick, and more. If you enjoy the show then don’t miss these.