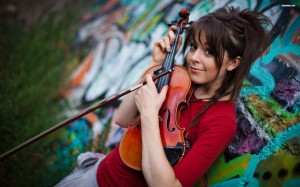 Lindsey Sterling is a violinist and YouTube sensation and known best for appearing on the fifth season of “America’s Got Talent”. She recently released her debut album titled “Lindsey Sterling”. The album quickly shot to #1 on the Electronic Music charts and landed in iTunes Top 100. Media Mikes had the chance to speak with Lindsey recently about her music and her future plans.

Adam Lawton: How did you first get involved with music?
Lindsey Sterling: I have played the violin pretty much my whole life. In High School I tried to branch out and experiment with different styles. I really got in to the solo performing aspect while I was trying to earn money for college. I had done some talent competitions and during that time started writing music that was more modernized while incorporating dance in to my performing. I never knew that my music would take the turn it did and become my whole life. I love it and feel so great. I am very glad the hard work has paid off.

AL: What can you tell us about your debut album?
LS: I started writing that at the end of 2010. I had intended to do a full length album as I could only afford to do 3 songs. I met with a producer and he thought the idea was kind of cool so we recorded the 3 songs and everything really started from there. I put the songs out on ITunes but nothing really sold at first. It wasn’t until I started making YouTube videos and the music was searchable that people started to take notice. People started buying my music which led to me being able to make more music. At first I was doing things song by song when I could afford them and finally I knew I just had to finish the album.

AL: What type of process do you take when song writing?
LS: I would meet with a couple different producers and when working on the various tracks I would sit and listen to the whole track while giving my input. Once the beat was done I would take that and improvise over the top of it. I would just jam for hours until I had what I wanted for the piece.

AL: What were your first thoughts when your album took off the way it did?
LS: I was extremely excited! I knew the album would at least do ok because I have some pretty dedicated fans that would support the album. The album is still #1 on the Electronic charts and is I think up to #13 on the overall charts. That was crazy. I still can’t believe after 3 weeks of being out the album is still in the top 100. It’s just overwhelming to think that only a few years ago I barely had enough money to record 3 songs and now all that hard work is paying off.

AL: Can you tell us about your current tour?
LS: We have cut the tour in half as we just finished up the first part. We have a 2 week break and then we will be back out on the road which will take us through California, Seattle and into Canada. That will wrap this tour. In January we are planning on going to Europe which I am looking forward to. I get a lot of request to play overseas so to finally be able to go over to these places will be great. When we return from Europe we are planning on hitting the States again in February/March.

AL: What do you like most about utilizing the YouTube site to help promote your music?
LS: It is really cool that we live in world now where an independent artist can make it in the music world. It used to be that you needed a record label in order for your music to get heard. Before I discovered the YouTube model I kind of started that way. I am so grateful that I was able to do things this way and for myself. I am still an independent artist and my album is doing just great. I also sold out my U.S. tour on my own. It is the time of the independent and you don’t have to sell out or do what people are making you do. You can stay true to your vision and be your own boss.

AL: With all of your recent success have you thought about going to a major label?
LS: I love being an independent artist. Funny enough I have thought about it. Now I am just waiting to see if someone comes forward with an offer I am willing to accept. I am not willing to give up certain things and I am also to the point where I don’t necessarily need a labels support. We have had a few major labels fly out to try and convince us to sign to their label. It is really cool that the ball is in my court.