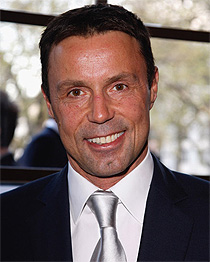 Maybe director Baillie Walsh could get a job as a diplomat. After all, his resume’ includes the Oasis documentary “Lord Don’t Slow Me Down,” where he managed to keep the often feuding Gallagher brothers fairly civil. He was also good enough to employ Daniel Craig in between Bond gigs, featuring him in “Flashbacks of a Fool,” his first fictional feature that he both wrote and directed. He has directed videos for such bands as Massive Attack and INXS. This week see’s the premiere of his new documentary, “Springsteen and I,” a look at the love affair between the Boss and his fans. How diplomatic is he? I was so engrossed in the last minute plans of my wife’s surprise 50th Birthday Party that when he called me for this interview (one I had set up a week before) I was totally unprepared. Undaunted, he agreed to call me a few days later, when he was on “his” time. Diplomatic and incredibly nice.

Mike Smith: What inspired you to do this project?
Baillie Walsh: I wish I could say it was my idea but actually I was asked by RSA Films (Ridley Scott’s Production Company) to do it. I was very excited about the concept of it and I thought it was a perfect idea for Bruce Springsteen and his fans. Actually I couldn’t resist it.

MS: When you approached Bruce was he keen to the idea as well?
BW: Absolutely. I mean we obviously needed Bruce’s approval to get the film made because I knew we would need archive footage and Bruce’s music to make the film possible. So I went to Bruce and Jon Landau (Springsteen’s longtime producer) and had a meeting with them. And it was very quick. They immediately realized that the idea was perfect for Bruce and they gave us permission to do it. And they gave us access to the archives and access to his music. They gave us the complete freedom to make the film we wanted to make. There was no editorial control. So it was an incredible experience for me. I feel very lucky to have been able to do it.

MS: A lot of your earlier work was in music videos, including INXS and the Oasis documentary “Lord Don’t Slow Me Down.” Do you think that experience made you the right person for this project in Springsteen’s mind?
BW: Yes. I’m sure the facts that I had both a music background and a documentary background were part of the reason I was asked to do it.

MS: You gave Daniel Craig his best role between Bond gigs when he starred in your first fictional feature, “Flashbacks of a Fool.” Do you plan to continue on the documentary side or do you want to concentrate more on fictional features?
BW: I love being able to really mix it up. Obviously I have to say that making a feature film that you’ve written is one of the great, extraordinary experiences in life. To be given the opportunity…and the finances…to be able to do that. I would love to be able to do that again. But I also really, really enjoy making documentaries. I really do. And this one was done in such a modern and interesting way…I really loved the approach and the idea. What excited me about it most was that I had never seen this film before…I didn’t know what the film could be. And to go into a project with fear, because you have no idea how it’s going to be, that is the most exciting way to work.

MS: What are you planning now?
BW: You know what I’m going to do now? I’m going to go on holiday! I’m going fishing, Michael.
MS: Don’t go to far.

“”I saw my rock and roll past flash before my eyes. I saw something else: I saw rock and roll’s future and its name is Bruce Springsteen.” Jon Landau, May 9, 1974

“This guy seems to be pretty popular.” Floyd Smith (my dad), October 31, 1975, handing me the only album he ever bought me, “Born to Run.” It was his attempt to connect with his fifteen-year old son. He had seen Springsteen on the covers of TIME and NEWSWEEK magazine earlier that week.

Since the early 1970s Bruce Springsteen, both solo and with the E Street Band, has given his musical soul to his fans. I first saw him live on February 5, 1981 while he was promoting his album “The River.” All total I’ve seen him live five times. What’s amazing is that he played just as hard (and just as long) in 2008 (I missed the 2012 “Wrecking Ball” tour) as he did nearly three decades earlier. He loves his fans and his fans love him. “Springsteen and I” is a documentary about that love.

The film opens with the Boss and the band on stage. He’s working the crowd into a fever pitch, thanking them for the energy they provide. “We need you,” he tells them. And they need him. The next two hours is a collection of homemade videos submitted by fans describing their relationship with Springsteen. One woman tells about how she holds a photo of Springsteen up in front of her infant child and repeats, over and over, “Daddy.” Others tell of how his music has affected their lives. Some of the stories are incredibly personal. A young man whose girlfriend broke up with him the day of the concert bravely attends the show alone with a sign reading “Just got dumped. Can I get a hug?” Springsteen happily obliges. Another man recalls the time he went to a show dressed as Elvis and bearing a sign that asked “Can the King sing with the Boss?” A young woman tells the story of how she got Springsteen’s attention with an “I’ll be your Courtney Cox” sign and soon found herself dancing on stage to “Dancing in the Dark.” What makes these stories even more amazing is that director Baillie Walsh has been able to go into the Springsteen archives and find the footage of these events and many more.

Walsh, who helmed the fantastic Oasis documentary “Lord Don’t Slow Me Down” as well as the feature film “Flashbacks of a Fool,” has dug out some gems. From raw and grainy early 1970s video tape to the multi-camera in house feeds of today, he presents an outstanding look into the man and his music. The musical numbers are complimented by the fans that share their memories, both funny (“I lost my virginity to ‘Thunder Road,’” says one woman) and poignant (“He taught me to be a better man”). Many are asked to sum up Springsteen in three words. Among the ones given: Poet, passion, comfort, hope, desire. One fan defines him as a Working Class Hero. But the words most fans, myself included, want to pass on to Springsteen come straight from the heart: Thank you!

“Springsteen and I” will debut in theatres around the world on July 22, with an encore presentation on July 30. For the location of a theatre near you visit www.springsteenandi.com.