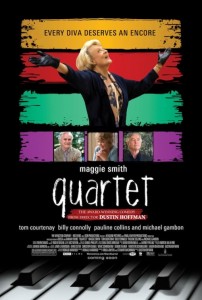 In this day and age when actors jump behind the camera at the drop of the hat it’s almost shocking to see that it took Dustin Hoffman 50 years to try his hand at directing (I don’t count the few days he spent on the film “Straight Time” before turning the project over to a more seasoned director). But those five decades of studying have truly paid off with Hoffman’ debut film, “Quartet.”

In the English countryside sits a beautiful retirement home with a special clientele. Everyone living under the roof is a classical musician. Of course, there is a class system in place. Among the unwritten rules – the tables in the dining room with a window view are reserved for vocalists…no clarinet players need apply! Every year, on October 10, the residents put on a gala benefit to raise money for the home, honoring Giuseppe Verdi. This year’s selection will be from “Rigoletto.” But when a new resident arrives, old wounds are opened, new friendships are made and the old showbiz adage that “the show must go on” is never more evident.

Packed wall to wall with a who’s who of some of Britain’s finest actors, “Quartet” is, in the simplest terms, a solidly told story. Based on the play of the same name by Ronald Harwood, who also wrote the screenplay, “Quartet” is a film that doesn’t rely on special effects or gimmicks. Just acting. That being said it’s probably no surprise that Dustin Hoffman is the director…that’s his acting philosophy in a nutshell. Courtenay, probably best remembered for his Oscar nominated work in “The Dresser,” is Reg, a former opera singer now taken to giving visiting school children lectures on his craft. Wilfred (Billy Connolly) spends his days flirting with the younger female members of the staff while sneaking the occasional nip or two. Cissy (Collins) is friendly to everyone she meets but sadly is falling into a state of recurring forgetfulness. These three are looking for a fourth to sing with them when the home receives a new arrival – the very diva-ish Jean Horton (Smith). So talented was Jean in her day that, when she arrives at the home, she is greeted with a loud ovation from the other residents. But then the fun starts. Jean insists on playing the diva, expecting the rules to be bent for her. She also happens to be Reg’s ex wife, a situation that makes things just a bit uncomfortable. This gets even more complicated when the other three want her to sing with them.

The film is quiet and personal, as are others based on Harwood’s work (“The Dresser,” “Taking Sides”) and that trait is enforced by Hoffman’s straightforward and unforced direction. Let’s hope it doesn’t take him another 50 years before he attempts his sophomore effort!