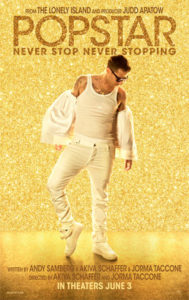 You may not know it but you are a fan of The Lonely Island. Fronted by Andy Samberg, this three-man group has created some of the most popular digital shorts for television’s “Saturday Night Live”, including “Mother Lover” and the Emmy award winning “Dick in a Box.” Hollywood has finally caught up with the trio and the result is their first motion picture, “Popstar: Never Stop Never Stopping.”

It is a story as old as show business. A group explodes on the scene but, for some reason, only one member really grabs the spotlight. Sometimes that member refuses to let this happen. There is a great story about how the Beatles were offered a major tour when they were just starting out, with the caveat being they had to drop their then-bassist Stuart Sutcliffe. John Lennon refused. Still, when the talent rises, things change. The Supremes become “Diana Ross and the Supremes” while Destiny’s Child pretty much became Beyonce. Here the Style Boyz are soon taken over by their photogenic lead singer, Conner 4Real (Samberg). He becomes the face of the group, which includes DJ Owen and songwriter Lawrence, played respectively by co-directors/writers Taccone and Schaffer. As the two fall behind, Conner continues a Justin Bieber-like rise. His first album, entitled “Thriller, Also,” wins many awards. However, when Conner accepts credit (and ANOTHER award) for a song he didn’t write, the group dissolves. When his latest album doesn’t perform like it should, all of the stops are pulled out to ensure that Conner remains on top.

There are very few “SNL” inspired films that can sustain 90 minutes. For every “The Blues Brothers” or “Wayne’s World” that come out there are dozens of “Night at the Roxburry” and “Superstar” to contend with. “Popstar” is right in the middle. It does drag on some but Samberg’s performance is so infectious that you’re willing to let a couple slow parts go by. Part of the fun is the sheer number of musical cameos that fill the film. From Ringo Starr to Adam Levine to Seal to Snoop Dogg, I counted no less than ten musical icons that drop by. The film also satirizes “message” songs, including one that praises gay marriage while still inserting quick cuts of Conner asserting that he, himself, is not gay.

Besides Samberg, the supporting cast is also strong. It’s nice to see the other Lonely Island guys get some screen time, and it’s always nice to see some of Samberg’s former “SNL” cast mates working, including Maya Rudolph, Bill Hader, Jimmy Fallon and Tim Meadows. Special kudos go to Will Arnett as the “boss” who is constantly sucking on a big drink in a brilliant parody of the current “TMZ” television show. And extra credit to producer Judd Apatow, whose cameo is both brave and revealing. Conner 4Real may be hitting some hard times, but he is truly never stopping!