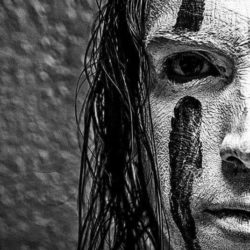 The heavy metal band Motograter are currently out on the road in support of their most recent release “Desolation” which was released early in 2017 and Media Mikes had the chance to speak with the bands singer James Anthony Legion about the tour, the bands current lineup and their most recent video for the track “Daggers”.

Adam Lawton: Can you give us some info the bands current tour and if you will be hitting new areas this time out?

James Anthony Legion: This is a short two week run that we set up to help break in some of our newer members. We will be hitting places like Seattle, Fresno, and Hollywood at the Viper Room which is place we really enjoy playing at. I don’t think we are hitting any new places this time around.

AL: Can you tell us about the bands new line up?

JAL: We have Aeon Cruz playing bass. She is the first ever female member of Motograter. Nuke had met her in Los Angeles and she is a really good bass player with a great look so we brought her in to the fold. We have never had a female in the band before and most of the time we are shirtless covered in body paint. Bringing a female into that situation obviously posed some issues (Laughs). We were able to figure something out and it looks really cool. We have also added Ryan Ramirez on drums. He is just a super sick player!

AL: With this being just a short run what are the bands plans after this leg wraps up?

JAL: We are trying to get a new album put together. In the mean time we are going out and doing a couple short tour runs here and there. We have another one set up with the guys from Terror Universal. That one will start after a festival show we have booked with Mushroomhead. We have a few other things in the works however we can’t announce those just yet.

AL: You just released a video for the song “Daggers” can you tell us about that?

JAL: That song is a real favorite of mine and one that I very much believe in. I think it has a great hook and the lyrics will speak to a lot of people. We are hoping this song will makes its way on to the radio much like “Dorian” did. We want to push this song the same way. It felt good having a song on the charts next to ones from bands like Korn and Stone Sour. With the look of the video we had ideas but Matt the director was really the guy behind that. We shot some stuff that in the end didn’t fit and we kept things to a pure performance type of video.

AL: Do you find it hard selecting one song to stand out above others you have a close relationship to?

JAL: For me it has a lot to do with the meaning behind the song and whether or not it strikes a chord with me. When I am writing I try to think about what is really on my mind and what is important. I try and transfer that to my lyrics. I feel if you are writing lyrics that mean something to you then chances are people will pick up on that and in turn they will mean something to them as well. If I feel I did a really good job getting my thoughts across and things are resonating then that’s a track that’s going to stand out.

AL: Where is the band currently in relation to the release of a new album?

JAL: We work in sort of a unique way. I am based in North Carolina while the majority of the band is in California. With me being a vocalist it’s a little easier for me as I don’t have to necessarily be there jamming on instruments. Nuke generally comes up with song ideas and then will send things over to me to add my stuff. He will then send something that is a little more finished and that’s when I add vocals. We have started working a little bit on things already but in between these two tours is when we plan to really start going.

For more info on Motograter you can visit their official website here.