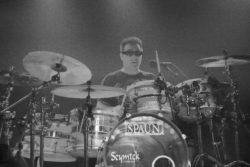 The Damned, easily the greatest surviving British punk band, bar none – are back with their first new album in a decade titled “Evil Spirits”. Where their peers either burnt out, or faded away into mediocrity The Damned continue to fire on all cylinders and breaking all the rules along the way. Media Mikes had the chance to talk with Pinch (Damned Drummer since 1999) about the new album, the bands recent video for “Look Left” and about the bands upcoming touring plans.

Adam Lawton: With a 10 year lapse between albums, what prompted the idea/creation to go ahead with a brand new full length release?

Pinch: It was the Pledge campaign, which after launch, was so successful we could see there was the demand for a new record that we all knew was there. To see that demand become real was very satisfying and we have to heartily thank our incredible fans for that. After our last (self funded) record, we knew we had to have Dave V fully on board with this one and he stepped up admirably, committing both musically and promotionally, whereas previously he had seemed somewhat reticent to launch himself fully into the project. The record really needed Dave’s touch and I’m happy that he dusted off the cobwebs and got songwriting again. His tunes and vision really drive “Evil Spirits” nicely and I think the mix of song styles by all contributing writers underlines the Damned’s ability to pleasantly surprise both fans and new listeners.

AL: How did the writing process go for “Evil Spirits”? Do you work separately from one another or collectively?

Pinch: It was a funny chess game leading up to this album. Captain seemed to be holding back his contributions, encouraging Dave to feel he had the freedom to create whatever took his fancy. It seemed at one point that everyone was too scared to offer up demos for fear of the wrong direction being taken. Thankfully, when push came to shove and we had a producer and studio time locked down, the songs were popping into the dropbox thick and fast. We ended up with at least a couple of records worth of songs from all writers, and it was decided to let someone else choose the final songs for “Evil Spirits”. I think the record works really well as a collection and perhaps some of the songs that didn’t make it would sound great together too, but as a band, sometimes you are too close to the art to make that call clearly. Captain likes to deliver fully finished demos, very well produced I may add, whereas the rest of us offer up a mostly completed song that benefits from all members adding their personalities. Sitting in a room together with a blank notepad is not the way any of us work best, as the years of pharmaceutical inspiration are thankfully long gone. However, working under the gun, with deadlines looming, seems to drag out inspiration by the bucket full.

AL: You recently released a video for “Look Left”, can you tell us about 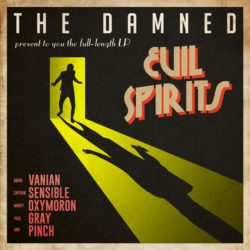 the story behind that and what made you choose that song for a video treatment?

Pinch: I had the bones of that song kicking around for a few years, hoping that it would eventually develop into something The Damned could use. The phrase- “while everybody’s looking left, what the hell is happening right?” seemed to really sum up where I could see the programming of humanity taking us. Whilst we are being distracted by some nonsensical celebrity twaddle, there would be a vote on a crucially important social issue that would sneak its way into law. Today’s media really have fine tuned the craft of distraction to the point of perfection. When perfectly true, well researched articles are labeled fake news to fit nefarious agendas, AND everybody swallows it, where does that leave the truth? Other than being just another opinion. Ultimately, whose opinion is right and whose is wrong are things we all currently have the liberty to discuss, but with increasing media censorship, I fear for our future ability to make any kind of disagreeable statement without some kind of social punishment. It was the label that chose “Look Left” as a single to have a video, and I really had to leave the interpretation to the video director, as these guys don’t like you stepping on their visions. Also, it was nice to see someone else’s take on my lyrics and sentiment. Ultimately, Radio declined to get on board with the song, stating some kind of half baked excuse about it not fitting the listenership they were “moving toward”. If the most commercial, hooky single the Damned have ever released can’t make a daytime radio playlist, with the album sitting at number 7 in the charts, you have to wonder if that age old Damned phobia hasn’t simply moved through the decades of radio producers and makes me ultimately think- Why Bother? Let’s just go back to the biff boom crash that the band are known for and screw any notion of radio success. Sad really but it’s an unfortunate reality.

AL: The band has a number of live performances booked starting in May. Can you tell us about the upcoming UK run, the few stops you have scheduled in the States and your plans for the remainder of the 2018 tour season?

Pinch: Due to the recording of the album being pushed back, we were kind of scrambling to lock in a good live touring plan. Only WE could release a record with ZERO live dates either side of release but, that is where we find ourselves. We head off to Europe next week starting in Germany and ending in France, by way of Switzerland, Italy and Holland. A short Arena tour of the UK with Hollywood Vampires is set for June, where Mr. Vanain and Mr. Depp can compare hair style notes and the benefits of a fine snifter no doubt. Then another short Pacific North West and Canada run in early July, including Burger Boogaloo in Oakland, which we are all excited to play. It sounds like a whacky thing that we would all enjoy, AND I get to see Devo the night before which is never a bad thing. October sees us embarking on another coast to coast U.S run, starting in Boston and ending in San Diego, before coming back to the UK for our traditional winter tour to wrap up the year. Hopefully we will debut some more songs from “Evil Spirits” at some point on these dates, it’s always good to see how they translate live.

AL: Each of you tends to have a number of projects going on at one time. Can you tell us about some of those and where we can keep up to date with everything?

Pinch: Not sure what the other guys have going on at the moment, but when I am not touring, I work a production gig in the United States that sees me working with a mind bending array of legendary artists that constantly makes me chuckle. Did I ever think I would be attending to the needs of Mr. Englebert Humperdinck when I was living in a punk squat in Grantham all those years ago? Well, anything can happen with an open mind, and often does. Think! It’s not illegal …..YET.

For more info on The Damned you can visit www.officialdamned.com