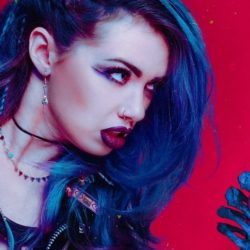 The Canadian hard rock group Sumo Cyco first burst onto the scene in 2011 with their debut release “Lost in Cyco City”. A short time later the band released their second full length “Opus Mar” and have been out on the road in support of that ever since. Media Mikes had the chance to speak with the groups lead singer Skye “Sever” Sweetnam about the group’s formation, her transition from pop to rock music and, the bands current tour with Nonpoint and The Butcher Babies

Adam Lawton: Can you give us a little background on the band an how you all came together?

Skye Sweetnam: Sumo Cyco is a four piece band based out of Hamilton, Ontario. I first met Matt who plays guitar in the band when I was fourteen. I was auditioning guitarists for my solo project and we started working together through that and from there we decided to start Sumo Cyco.

AL: Having come from a successful pop career what was that interested you about doing Sumo Cyco which is very much a rock orientated project?

SS: Matt was a big influence on that as he is always giving all sort of different music to check out. When I was younger I had the chance of being the opening act for Britney Spears and after getting off stage all my band mates would be blasting music like Metallica and Pantera. I soaked all that in and when changes started happening with my pop career and as I transitioned from a teenager to a young woman I felt I wanted to try something a little bit different. I really enjoyed working with Matt and felt like this type of project would be a good collaboration for us. From the outside it might look like a really drastic change but during my career as I pop singer I actually got to work with people like Tim Armstrong from Rancid, Mark Hoppus from Blink 182 and a bunch of other great people. For me it was more of a natural progression as I always loved rock and heavy music.

AL: The band has an impressive YouTube following and is putting out some very high quality pieces independently. Can you tell us about your process for that?

SS: I grew up watch B and C movies and it was always a goal to try and find the weirdest movie you could from one of those truck stop bargain bins. (Laughs) I have always loved film and the idea of being able to make a piece that went along with our music without be told from an outsider of how it should look or be. I love being able to come up with these ideas and add something visual to our music. I enjoy turning the music and videos into just one big project. This is another passion of our and we are self taught when it comes to all of it. We knew we could save a lot of money by doing things ourselves and with so much content being released each day this is a fun way for us to attract new fans.

AL: Is this something you see yourself doing more of?

SS: For sure! There have been talks of one day doing a film and there are just so many projects I want to do but right now the band is taking precedence. We have a lot of great opportunities and we are going with the flow of that. We will be expanding things as time go on.

AL: Can you tell us about the bands current tour with The Butcher Babies and Nonpoint?

SS: We first met the Butchers in the UK when we toured with them over there about two years ago. The same thing goes for how we first met Nonpoint. When our name came up for the tour they knew who we were and what we could bring. The tour has been great so far and a lot of fun so far and we still have a bunch of shows left as the tour runs through mid June.

AL: What are the bands plans after this tour wraps up?

SS: We have been working our album “Opus Mar” for about a year and a half now so we are looking to head back in to the studio to record some new material. We did release a single at the beginning of the year titled “Undefeated” but we are getting hungry to back in the studio and record some new material. We are always coming up with new ideas so I think that is our next step. We just started working with a new management and are putting together a lot of new stuff for the upcoming year.