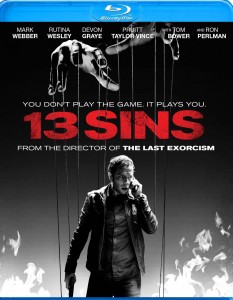 Back in 2010, I was helping to promote a film called “The Last Exorcism”, this was right when I started this website and I snagged a huge interview at the time with the director of that film, Daniel Stamm. I knew this guy was going to be a big name and I was lucky that I got him early. Fast forward to today, “13 Sins” is his next film and it headed directly to home release. I find that rather disappointing to be honest. The film itself is not disappointing though and has a lot of great aspects to it. It does have traits of the “Saw” franchise but it is able to take a rather fresh take on that idea. What the film also has is a sharp cast including Mark Webber (“Scott Pilgrim vs. the World”), Rutina Wesley (HBO’s “True Blood”) and Ron Perlman (“Hellboy”). The film also has a helluva punch at the end, which was quite surprising and ended up winning me over. I could see myself recommending this horror/thriller and hopefully we will be seeing a lot for from director Stamm.

Official Premise: Elliot (Mark Webber) is a bright but meek social services coordinator, drowning in debt and desperate because he’s about to marry the love of his life (Rutina Wesley). Upon receiving a cryptic phone call informing him that he’s on a hidden camera game show where he must execute 13 tasks, Elliot learns he will be on his way to winning a multimillion dollar cash prize if he quickly follows through with his first two instructions: swat the fly that is currently bothering him and then eat the fly. Although thousands of dollars are suddenly appearing in his bank account, Elliot remains suspicious, though comforted by the knowledge that he can stop playing at any time if only to lose every penny that he’s won. As he leaves a path of destruction behind him and runs away from the law (Ron Perlman), Elliot’s need to complete the game escalates as the tasks grow increasingly sinister, to a devastating point of no return.

The 1080p transfer looks awesome for this film. The cinematography is also well done and really works for the film’s setting. The DTS-HD Master Audio 5.1 really delivers some impress sound especially for the key bone saw scenes…Yikes! In terms of special fearures there is a great audio commentary track with Stamm along with Webber, Perlman, and Graye. Besides that there is a decent behind-the-scenes look into “The Making of 13 Sins”. It is a little short but does pack a lot into it. There is a complete deleted sequence from the film, which runs just over five minutes. It is an already seen for sure involved oral sex (oh yeah!) but it was well cut. The alternate ending is pretty kick ass as well and included a nice twist also. Lastly “Anatomy of a Meltdown” features Stamm talking about the scene. 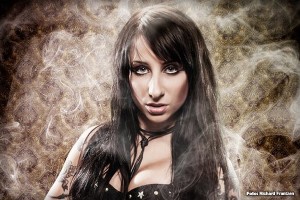 The Swedish heavy Metal band Sister Sin has just released a new album titled “Now and Forever” via Victory Records. Recently Media Mikes had the pleasure to talk with the bands lead vocalist Liv Jagrell about the album and the bands upcoming U.S. tour.

Adam Lawton: Can you give us some background on the band?
Liv Jagrell: We are Swedish band that started around 8 years ago. I would describe our sound as old school heavy metal. That’s definitely where are roots are and Sister Sin has that similar type of sound. That sound is something that is in our hearts and is also something we want to share with everyone out there.

AL: How did you come to join the band?
LJ: The band had been looking for a singer with a voice similar to Motley Crue. One of the guys had an idea where they thought it would be cool to have a female singer but the others weren’t so in to the idea. Around that time I had put an ad in the paper and was contacted by the guitarist. He told me they were mostly looking for a guy but to come down and try out anyways. I went down to audition and we did a couple original songs as well as the Motley’s song “Live Wire”. After that they told me I was the best one to come through and asked me to join the band. I guess they had auditioned several other guys but none of them had anywhere near the balls I had. (Laughs) That gave me a bit of confidence.

AL: Can you give us some background on the band’s new album?
LJ: This will be Sister Sin’s third album now. We felt that we needed to do something different from the previous two releases. The album is old school heavy metal with a touch of the first two records added in. Our last albums were pretty straight forward so this time we wanted to try something different. We worked heavily on the vocal and melody of this album. We based the music around that which is something we had never done before. We also added some keyboard parts for the first time as well. We tried to step a little outside of our box. The album turned out better than we expected and we are very happy.

AL: What made you choose “End of the Line” as the album’s first single?
LJ: That was collaboration between us and Victory Records. We had a couple of choices but in the end this was the song that we felt worked best as a single. The song has a sound that represents the entire album very well. The song was also a great fit to make a video for.

AL: Can you tell us anything about the video?
LJ: The video was released on Oct. 15th and is based around Armageddon prophecies. We used that idea but added in the fact that people still need to be living day by day and not worrying about when the world may end. If you take those thoughts and put them in the mid of a maniac you well get this video. The video plays very much like a movie and is similar in theme to “Terminator”. We are very happy with the video.

AL: When you are writing material do you often find yourself pulling from real world situations or topics?
LJ: We write about things we care about. We are known for being rebellious but we care about what’s going on in the world. None of us were born in to rich families and were brought up in a way that we have to work to survive. This is our reaction to Sweden and the rest of the world.

AL: Can you tell us about the bands upcoming tour?
LJ: We will be heading out on the road in February with Doro. We want to get back to the U.S. as soon as possible and hopefully we can get something set up before then. We really just want to get back out there. We would be on tour right now if we could but things just haven’t worked out that way. We do have some shows scheduled around Scandinavia but we are also looking to head to Europe as well.