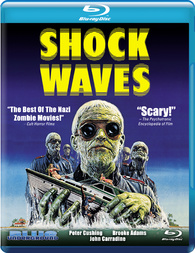 I remember the first time that I saw the VHS box to “Shock Waves” at the loyal mom and pop video store. I mean what young boy can put down a box with the words Nazi zombies?! This cult classic is is making’s its Blu-ray debut thanks to Blue Underground. This film still holds up and is quite fun. The film stars Peter Cushing (The Curse of Frankenstein), Brooke Adams (The Dead Zone) and John Carradine (The Howling). The zombies aren’t very zombified according to today’s standards. I loved the idea of people randomly just jumping out of the water, still effective. Worth checking out, but be wary of the lacking audio/video presentation.

Official Premise: In the dark days of World War II, the Nazi High Command ordered its scientists to create a top secret race of indestructible zombie storm troopers – un-living, unfeeling, unstoppable monstrosities that killed with their bare hands. They were known as The Death Corps. No member of this horrific SS unit was ever captured by Allied Forces – and, somewhere off the coast of Florida they have survived…

Blue Underground claims that this is fulled remastered and restored from original elements but this film looks pretty sad with its 1080p transfer. There is a whole lot of consistent noise in the background throughout. The DTS-HD Master Audio Mono is pretty harsh as well. The dialogue seems a muted but the score is still great and sounds decent, courtesy of composer Richard Einhorn

If you have seen Takashi Shimizu’s past work, this is a warning that “Shock Labyrinth 3D” is nothing like any of his other work. I thought that the mix of Takashi Shimizu and 3D horror would have been a match made it heaven. Instead, I found myself bored out of my mind. The 3D was absolutely terrible and that is a rare sentence you will see me write. It was poorly shot and even out of focus in some scenes. The spooks in “The Grudge” still haunts me and I was hoping to get scared in 3D but there was not even one scary aspect in the film, unless you count falling asleep.

The film follows a group of teenagers, who find a friend who has been missing for 10 years though it is not a warm welcoming. There was a lot of mystery behind her disappearance it and led back to a labyrinth haunted house inside an abandon hospital. The friends find themselves drawn back to the hospital but are unable to leave once things go array and they find out the reason for their returned visit. The friend realize that their missing friend has plans to get revenge for leaving her a decade back.

The Blu-ray presentation overall was not impressive at all. The video had some major issues with clarity and completely misused the 3D format. The sound on the film is ok but nothing special with its Japanese DTS-HD Master Audio 5.1, though I found myself watching in English dub to avoid the terrible 3D Japanese subtitles. The film is a combo pack and also came with a DVD 2D version of the film. The 3D Blu-ray disc also came with a 2D version of the film but I do not think it would matter since it a bad movie, 3D or not.

The special features on this Blu-ray are just as bad as the film is. All of the extras are obviously subtitled as well. There about 30 minutes of interviews included. There is a brief behind-the-scenes featurette, nothing worth watching. Lastly there is a press conference footage which is also extremely short.