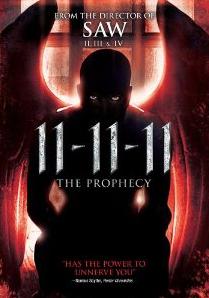 When you have a title on the DVD, “From the director of Saw II, III & IV”, it is an immediate draw for me. I have loved director Darren Lynn Bousman’s work, specifically “Repo: The Genetic Opera”. This film is totally different from those works though. It is well-paced, haunting and delivers some great spooks for sure. “11-11-11” had a rocky road with distribution in theaters and seemed to get shun to DVD with the subtitle “The Prophecy”. Either way I am glad it finally made it out and people get to see it. Horror fans are going to want to check this out for sure. It definitely has similarity to “The Omen” series in a sense but overall stands perfectly well on its own. It manages to successfully make you look behind you back after watching the film.

After the death of both his wife and child, author Joseph Crone travels from the United States to Barcelona, Spain, in order to reunite with his estranged brother and dying father. Joseph is suddenly haunted with by the number 11 and he needs to get to the bottom of it. He finds that the number holds meaning not only to himself but possibly to all of religion and 11/11/11 turns out to be more than just a date…it’s a warning!

The DVD looks good with its Widescreen 16/9, 2:35.1 transfer.  I still would have loved to seen this film released on Blu-ray, not sure why Big Sky Studios skipped that option. The sound is also impressive for DVD and packs a 5.1 Dolby Digital track, which works well with the haunting score.  Major props needs to go to Joseph Bishara for creating such an amazing score just like he did last year with “Insidious”.  The special features only include a short behind-the-scenes making-of featurette and a few deleted scenes. I would have loved to seen a commentary track from Darren Lynn Bousman on this release.