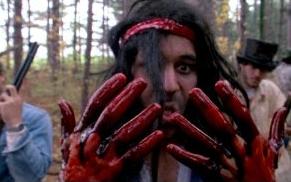 Synapse Films is the team behind this fantastic release of this cult classic on Blu-ray.  The release features an all-new High-Definition 2K Digital Restoration from the original negative.  It looks very impressive for a low-budget film from 1985.  This film also some packed with the “Evil Dead” group and stars Sam Raimi, Ted Raimi, Scott Spiegel, and Timothy Quill.  The film is very gory and is really no-holds barred.  It really kick-ass some ass and asks questions later.  We all need to commend Synapse for really this 80’s gems and restoring them in HD.  This release will easily satisfy fans of the cult classic.  Did I mention that Sam Raimi plays one of the craziest son bitches? It’s a no brainer.

The film follows a group of friend who return home after Vietnam but are not met with a happy welcome.  During the war, Marine Sergeant Jack Stryker takes  two bullets in the leg but is rescued by a friend.  When he comes home to his girlfriend, she is abducted by a crazy cult led by it’s vicious leader, Stryker.  Jack recruits the help of his three of his old marine friends and they seek out to get revenge on this group of crazies. 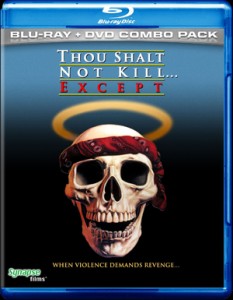 The film special features are very impressive as which has become expected from Synapse Films. There are two audio commentary tracks from director Josh Becker, Bruce Campbell and star Brian Schulz.  The coolest feature on the release is the Original Super 8mm short film, Stryker’s War Short Film, starring Bruce Campbell.  It is worth the purchase alone.  There is a great featurette called “Made in Michigan: The Making of Thou Shalt Not Kill… Except”. There is an all-new video interview with Bruce Campbell, always amazing.  I can watch him read a store receipt.  There is one deleted scene with optional director’s commentary and also an alternate title sequence.  Also included is the original theatrical trailer.  To top off a great release like most Synapse films, there is reversible cover artwork included as well.