Giant Pictures has acquired the U.S. rights to the sci-fi/thriller VOLITION. The film will be released in theaters, on Apple TV, Prime Video and other Digital Platforms on July 10, 2020.

VOLITION is the feature directorial debut for Tony Dean Smith (Rakka), who co-wrote the script with his brother and producing partner Ryan W. Smith (Next Gen).  The film stars Adrian Glynn McMorran (The Revenant), Magda Apanowicz (You), John Cassini (The Possession), Frank Cassini (Watchmen), Aleks Paunovic (War for the Planet of the Apes), and Bill Marchant (Godzilla).  It was produced in association with Paly Productions and Smith Brothers Film Company.

“A great debut for the Smith Brothers, VOLITION is sure to deliver thrills and a mind-bending experience to sci-fans everywhere,” said Courtney Cox, Manager of Content Acquisitions & Marketing at Giant Pictures.  “We are thrilled to be bringing it to digital platforms.”

VOLITION is a time-bending cerebral science-fiction thriller where a man afflicted with clairvoyance tries to change his fate when a series of events leads to a vision of his own imminent murder. Awarded as best feature at the Philip K. Dick Film Festival, among a slew of other awards and critical acclaim, VOLITION is a tightly-wound puzzle of a ride.

The deal was negotiated by Courtney Cox, Manager of Content Acquisitions & Marketing from Giant Pictures, and Smith Brothers Film Company and Paly Productions on behalf of the filmmakers.

Giant Pictures is a boutique digital distributor based in NYC and Los Angeles, which is dedicated to elevating the digital experience. We work directly with filmmakers and rights owners to distribute movies and TV shows to VOD & OTT platforms in North America and worldwide. Giant is a division of Giant Interactive, an award-winning digital media and technology services company. Giant is an iTunes Preferred aggregator and encoding house. Recent movie and documentary releases include: ‘Love, Antosha’ (Dir. Garret Price, Sundance 2019), ‘Matangi/Maya/M.I.A.’ (Dir. Steve Loveridge, Sundance 2018), ‘In Reality’ (Dir. Ann Lupo, LAFF 2018, Austin FF 2018). Visit us at: www.giant.pictures

Available in Theaters and On Digital Platforms on July 10, 2020

When it comes to the genre of science fiction, it is my third love only behind my wife and daughter 😉  I am a huge sci-fi junkie whether it is kicking back watching Syfy Channel for the last 20 years or eating out at the Sci-Fi Diner at Hollywood Studios in Walt Disney World.  It is a very big part of my life. When I found out that Syfy Channel was advertising this book during two-day “The Twilight Zone” New Years Marathon, I knew I just had to have it. The book is very snazzy looking, courtesy of Universe Publishing. It is a really sharp book and also a real good page-turner. There are a few things that I would have liked to see a little more and some things a little less.  As a fan, the sci-fi genre is way to large to encompass in just one 250+ page book.  This is perfect that what it is aiming to be and with Syfy behind it you know that means great content and quality. It gives a general overview spanning over everything that has inspired science-fiction fans to love this genre for many many years. You like “Star Trek”? “Star Wars”? “Doctor Who”? Then this book is for you!

Michael Mallory definitely has knowledge of this world having authored “Universal Studios Monsters: A Legacy of Horror”, as well as “Marvel: The Characters and Their Universe”.  I have a feeling that he made a book that he himself would be interested in reading. My only complaint is that I would like to have seen more on each film/TV show but like I said this book isn’t a focus on “Star Trek” or “Star Wars”, it is a overall look at the genre. The pictures used throughout are crystal clear and the paper stock is firm and durable. Universe definitely delivers quality here. “The Science Fiction Universe and Beyond” is arranged chronologically and shows the progression of the sci-fi genre over the decades. This isn’t just a book with premises, there is also interesting back stories and trivia included for each one. The book starts with a very nice introduction from Thomas P. Vitale, who is the Executive Vice President of Programming and Original Movies at Syfy. You can tell that he is really loves what he does as well and really sets this book up to shine.

The first chapter is called “Early Dreams and Nightmares” and starts right at the beginning with “A Trip to the Moon”, dating back to 1902 from Georges Méliès to Fritz Lang’s “Metropolis”. This chapter also has a spotlight section on serials like the old George Reeves “Superman” series. The second chapter takes look at the “Exploration of Space” with “The Day the Earth Stood Still” (1951) and it’s remake as well to John Carpenter’s “The Thing”. There is also a spotlight on “Planet of the Apes” as well as its sequels/prequels/remakes. The third chapter is titled “What Have We Wrought?” and kicks off with my main man Godzilla. Who doesn’t love the big lizard and his love for destroying everything in his path. It also takes us on board the Nautilus in “20,000 Leagues Under the Sea”, one of best sea voyage films. The spotlight in this chapter focus on the legacy of “The Twilight Zone”. This show alone is so influential and plentiful that it could have filled a book in its own. Chapter four is called “Space and Relative Time” and you know what that means…creatures from outer space! and touches on films like “2001: A Space Odyssey”, which is one of the most influential entries in this genre. Chapter 5 is titled “Medium with a Message” and is a voyage in the futuristic world with classics like “Westworld” and “Logan’s Run”. The spotlight here is my favorite “Star Trek”. Where would the genre be without the presence of “Star Trek”, who knows?

Chapter six look into “A New Beginning” with “Battlestar Galactica”, “Blade Runner” and “Tron”. Three things I can watch anytime, anywhere! Of course the spotlight on this chapter is “Star Wars”, again is such a beast in terms of content but is represented nicely here. Chapter seven is called “Alternate Times, Alternate Realities” and focuses on genre favorites like “The Terminator” franchise and “Jurassic Park”. The spotlight here is “Doctor Who”, which is finally making a large splash in the US, thanks in part to Syfy. “Aliens Among Us” kicks off chapter eight with shows like “Farscape” and films like “Men in Black”. The spotlight for this is a little more broad focusing on all superheroes, especially “The Avengers”. The last chapter looks into the genre in whole in “The Science Fiction Culture”. It looks behind TV series like never-giving-up fan favorite series “Firefly”, the explosion of “Avatar” and its effects on the industry. It wraps up this great book and leaves you drooling for more. In the description for this book, it uses the phrase “in this volume”, so hopefully that that is the plans and we can hopefully see further installments in the near future. 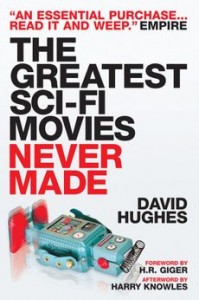 I think we all forget that some of our favorites films have long journeys to the big screen and some never even get made.  Whether it is changing directors or projects falling through, this book reveals the “what if” factor of many sci-fi movies that were never made.  This revised & expanded edition contains over 100 pages added to the book.  It is a must for all sci-fi fans and probably movie fans in all.

The book is kicked off with a great foreword by H.R. Giger (designer for “Alien”), it is a great insight into his career and about his dealings with Hollywood.  I am a huge movie fan especially the sci-fi genre and this book is really such a great insight into these lost films.  Some of them I would have loved to have seen like Terry Gilliam’s “Watchmen” or Tim Burton’s “Superman Lives”. Then there are some that I would have hated like Nicholas Cage playing Superman.  I also enjoyed the fact that this wasn’t consisted of re-hashed knowledge and there was a lot of new information that I never knew about.   Author David Hughes made sure to back this book with a bunch of great new interviews with the people involved with the writers and directors of these lost projects.

Besides providing new information, the book is also very detailed and includes thorough information like budgets and technical information about these films.  I enjoyed that most about this book, especially because I am a big statistical nerd.  Lastly, who else should provide the afterword to a book aimed at nerds, then the biggest nerd, Harry Knowles aka the famous blogger from Ain’t it Cool News.  He gives good insight in the wrapping up the book and its message.  If you enjoyed this book also check out Hughes’ latest coming out February 28, 2012 from Titans Books called “Tales From Development Hell: The Greatest Movies Never Made?”.