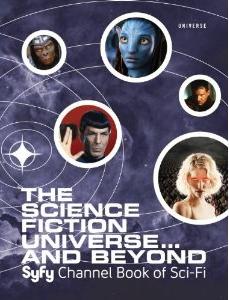 When it comes to the genre of science fiction, it is my third love only behind my wife and daughter 😉  I am a huge sci-fi junkie whether it is kicking back watching Syfy Channel for the last 20 years or eating out at the Sci-Fi Diner at Hollywood Studios in Walt Disney World.  It is a very big part of my life. When I found out that Syfy Channel was advertising this book during two-day “The Twilight Zone” New Years Marathon, I knew I just had to have it. The book is very snazzy looking, courtesy of Universe Publishing. It is a really sharp book and also a real good page-turner. There are a few things that I would have liked to see a little more and some things a little less.  As a fan, the sci-fi genre is way to large to encompass in just one 250+ page book.  This is perfect that what it is aiming to be and with Syfy behind it you know that means great content and quality. It gives a general overview spanning over everything that has inspired science-fiction fans to love this genre for many many years. You like “Star Trek”? “Star Wars”? “Doctor Who”? Then this book is for you!

Michael Mallory definitely has knowledge of this world having authored “Universal Studios Monsters: A Legacy of Horror”, as well as “Marvel: The Characters and Their Universe”.  I have a feeling that he made a book that he himself would be interested in reading. My only complaint is that I would like to have seen more on each film/TV show but like I said this book isn’t a focus on “Star Trek” or “Star Wars”, it is a overall look at the genre. The pictures used throughout are crystal clear and the paper stock is firm and durable. Universe definitely delivers quality here. “The Science Fiction Universe and Beyond” is arranged chronologically and shows the progression of the sci-fi genre over the decades. This isn’t just a book with premises, there is also interesting back stories and trivia included for each one. The book starts with a very nice introduction from Thomas P. Vitale, who is the Executive Vice President of Programming and Original Movies at Syfy. You can tell that he is really loves what he does as well and really sets this book up to shine.

The first chapter is called “Early Dreams and Nightmares” and starts right at the beginning with “A Trip to the Moon”, dating back to 1902 from Georges Méliès to Fritz Lang’s “Metropolis”. This chapter also has a spotlight section on serials like the old George Reeves “Superman” series. The second chapter takes look at the “Exploration of Space” with “The Day the Earth Stood Still” (1951) and it’s remake as well to John Carpenter’s “The Thing”. There is also a spotlight on “Planet of the Apes” as well as its sequels/prequels/remakes. The third chapter is titled “What Have We Wrought?” and kicks off with my main man Godzilla. Who doesn’t love the big lizard and his love for destroying everything in his path. It also takes us on board the Nautilus in “20,000 Leagues Under the Sea”, one of best sea voyage films. The spotlight in this chapter focus on the legacy of “The Twilight Zone”. This show alone is so influential and plentiful that it could have filled a book in its own. Chapter four is called “Space and Relative Time” and you know what that means…creatures from outer space! and touches on films like “2001: A Space Odyssey”, which is one of the most influential entries in this genre. Chapter 5 is titled “Medium with a Message” and is a voyage in the futuristic world with classics like “Westworld” and “Logan’s Run”. The spotlight here is my favorite “Star Trek”. Where would the genre be without the presence of “Star Trek”, who knows?

Chapter six look into “A New Beginning” with “Battlestar Galactica”, “Blade Runner” and “Tron”. Three things I can watch anytime, anywhere! Of course the spotlight on this chapter is “Star Wars”, again is such a beast in terms of content but is represented nicely here. Chapter seven is called “Alternate Times, Alternate Realities” and focuses on genre favorites like “The Terminator” franchise and “Jurassic Park”. The spotlight here is “Doctor Who”, which is finally making a large splash in the US, thanks in part to Syfy. “Aliens Among Us” kicks off chapter eight with shows like “Farscape” and films like “Men in Black”. The spotlight for this is a little more broad focusing on all superheroes, especially “The Avengers”. The last chapter looks into the genre in whole in “The Science Fiction Culture”. It looks behind TV series like never-giving-up fan favorite series “Firefly”, the explosion of “Avatar” and its effects on the industry. It wraps up this great book and leaves you drooling for more. In the description for this book, it uses the phrase “in this volume”, so hopefully that that is the plans and we can hopefully see further installments in the near future.