AL: Were you allowed to experiment with your character at all?
SL: We really did get some freedom within the structure of the film. My big scene is at the very end of the movie. Chris gave us the frame work and allowed us to do whatever we wanted within the boundaries of the scene. We talked over a few different ideas and went from there.  We sort of did things in the moment. To be allowed to do that on this caliber of a movie was very unique. 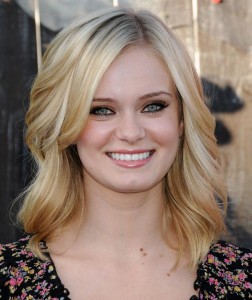 Sara Paxton is the star of the 3D thriller “Shark Night 3D”, directed by David R. Ellis.  Sara is also know for her role in 2009’s “Last House on the Left”.  Media Mikes had a chance to chat with Sara about starring in “Shark Night 3D” and about working up close with the sharks.

Mike Gencarelli: What drew to the “Shark Night 3D” project?
Sara Paxton: Around this time last year David Ellis called me and told me he was a big fan of another film I did called “Last House on the Left”. He sent me the script and after I read it, David asked me if I would like to go to a lake house in Louisiana and spend the summer with some cool young people while also training with Navy seals and riding jet skis. I said it sounded awesome to me! David being a fan of mine so to speak and his feelings towards the project is what really got me interested.

MG: What is it like working with David Ellis?
SP: David is like a big kid! We would be shooting these really serious shark attack scenes and all of a sudden he would stop and ask everyone to gather around. I thought I was getting fired but then he would yell “Donut eating contest!” He had like over 100 Krispy creams driven in and while we were sweating our balls off, David is having a donut eating contest. It was so awesome!

MG: How did you prepare for your role?
SP: Basically I did a lot of swimming, which I had been familiar with due to working on other swimming type movies. We also trained with the Navy seals in order to be fully prepared for our underwater fight sequences. It was really amazing to work with those amazing guys who not only catch Osama Bin Laden but also train actors for a shark movie. It was great!

MG: What was it like working with the sharks?
SP: The sharks were definitely divas. They were super heavy, life size mechanical sharks that could swim like 40 miles an hour. They had real shark’s teeth and due to their size they were kind of unpredictable. People were actually getting attacked by fake sharks. It was pretty crazy and I didn’t expect anything like that to happen.

MG: Did the film being shot in 3D pose any additional challenges for you?
SP: Not really. It was already kind of difficult with the water and sharks, so I didn’t really notice much. The crew was very skilled at handling the cameras. Everyone was totally capable and everything went smoothly.

MG: Would you consider this role one of your more difficult?
SP: Definitely! Even though I have worked with the water before and done a lot of swimming shoots this underwater, holding your breath fight scene stuff was something that even though we trained for it you’re not fully prepared until your actually in the water and doing it. It was crazy! I have never had to do something like this before. It took a lot of energy and I spent a lot of time underwater with just a regulator and no mask.

MG: Can you tell us about your experience at Comic-Con this year?
SP: Comic-Con was great. I wish I could have stayed longer and gotten more pictures with people who dressed up. If I was going to Comic-Con as a fan I would totally go all the way and dress up as one of my favorite characters. We were somewhat confined to our “Shark Night” group but I wish I could have wandered around more and seen stuff.

MG: Can you tell about the other projects you have been working on?
SP: I just finished a film called “The Boys of Abu Ghraib”, which is a comedy about the whole Abu Ghraib controversy that happened a short time ago. I have a small part where I play the main characters girlfriend back home. I love the horror genre but I am excited to get to do a project where I can break away and do something more serious. The cast was really great on that shoot.