“Vice Principals” is the latest project from HBO’s “Eastbound & Down” co-creators Danny McBride and Jody Hill. It is a set series with two seasons and 18 episodes total. The first season consisted of 9 episodes was pretty kick ass and definitely left me wanting more. Definitely excited to see what they have cooked up for the second half of the series. Danny McBride and Walton Goggins are awesome together and play off each other really well. I would have loved to see this series go longer than just two seasons but I also appreciate when something has a proper beginning and end. Definitely worth binging on before season two airs this year.

Official Premise: In this new comedy series “Vice Principals”, the longtime principal of a suburban high school steps down, leading ambitious vice principals Neal Gamby (McBride) and Lee Russell (Goggins) to both set their sights on the vacated top spot. But when new rival Dr. Belinda Brown (Kimberly Hébert Gregory) enters the picture, these bitter antagonists must form an unholy alliance to bring down the outsider by any means necessary.

HBO is releasing this season as a combo pack with a Blu-ray and Digital HD copy included for this show. The special features are decent and worth checking out if you enjoyed the show. Who doesn’t love a good Blooper Reel?! This Blu-ray packs a bunch of solid laughs with this one included. There are audio commentaries for each of the episodes, which is awesome with cast/crew participating. This was a great way to re-watch the season and get to enjoy it more due to the comments. Lastly there are a bunch of deleted/alternate scenes included that are worth checking out. 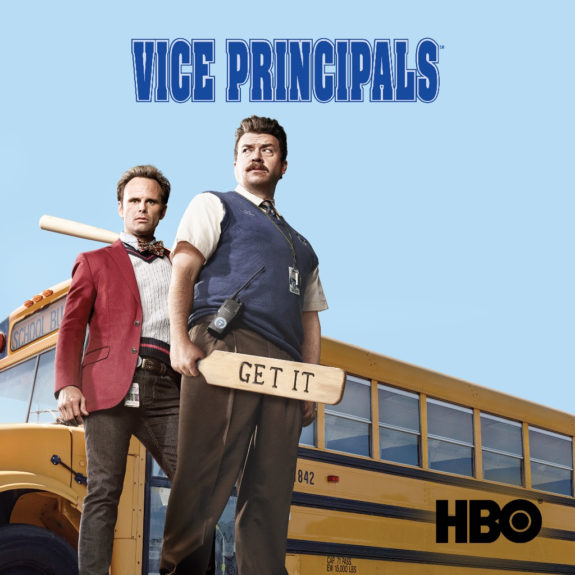 To celebrate the digital HD release of Season 1 of “Vice Principals”, Media Mikes would like to give two of our fans a chance to win a digital HD copy of the film. If you want to win this great prize, please leave a comment below your favorite role from star Danny McBride. This giveaway will remain open until November 25th at Noon, Eastern Time. This is open to our readers in US only. One entry per person, per household. All other entries will be considered invalid. Media Mikes will randomly select winners. Winners will be alerted via email.

Looking for something “profanely hilarious” (TV Guide) to watch this fall? Season one of the “funny as hell” (Deadline) HBO comedy series Vice Principals is available now on Digital HD!

Created by Danny R. McBride and Jody Hill (creators of HBO’s Eastbound & Down, along with Ben Best), Vice Principals: Season 1 tells the story of North Jackson High School and the two people who almost run it, the vice principals. McBride and Walton Goggins star as the school administrators, who are in an epic power struggle, vying for the top spot: to be school principal. But when new rival Dr. Belinda Brown (Kimberly Hébert Gregory) enters the picture, these bitter antagonists must form an unholy alliance to bring down the outsider by any means necessary.