Back in the days of Shakespeare, theatre was one of the most widely accepted and talked about means of spreading cultural capital and ideas, with the working man or woman able to find out more about how their rulers ticked on the stage than perhaps anywhere else.

These days, theatres have become places where rich people like to hold business meetings during the interval and where a miniature tub of ice cream costs more than a three course dinner, although there are some shows which still try to keep things fun and entertaining.

Fortunately, there are plays that manage to buck the trend and include aspects that will still appeal to the masses rather than only the well-heeled few. One of these is games, whose application in a stage play can vary from symbolism all the way through to bringing about a plot twist.

Here are some of the world’s most famous stage plays that featured or were based around popular games.

This Stoppard masterpiece is one of the great stage plays of the 20th century and is still revered to this day by theatre goers and critics alike.

Classic games are used in the play in order to toy with the question of whether the fate of people, and the world they live in, is predetermined, ruled by chaos, or if there is a half-way house that means things can be predicted through probabilities and equations.

This makes for a gripping and challenging play which is actually a reimagining of Shakespeare’s Hamlet. The message being conveyed to onlookers can be construed in many ways, but the main one seems to be that as much as peoples’ live are defined by determinism, it is man’s innate desire to compete and throw caution to the wind that throws up life’s chaotic nature. This point is poignantly put across by Stoppard in a scene where two characters ponder the sort of calculations and probabilities that modern day blackjack and craps players face every time they are dealt a hand.

Rosencrantz and Guildenstern are Dead still regularly plays at some of the top theatres around the US and, indeed, the world.

Sit back and enjoy the show

Card games are at the very heart of this American stage play classic, which was set in the bustling city of New Orleans.

As was the case in Rosencrantz and Guildenstern are Dead, the games in this play are largely symbolic, often revealing the motivations and personalities of characters rather than being pivotal to the plot or story arcs.

The game that the two protagonists Stanley and Blanche tend to play is poker, with a game being played in one of the play’s very first acts as well as in one of the final acts.

One of the best runs of the play took place at the Circle in the Square Theatre in 1988, with big names like Alec Baldwin, Jessica Lange and a budding James Gandolfini of Sopranos fame lighting up the boards.

While the two plays above are classics which very clearly used games to get their intended messages across to the audience, there are now contemporary theatre plays which are borrowing other aspects of gaming culture to not only enhance their stories but also the way in which their plays are viewed and interacted with as a whole.

Immersive theatre has been a booming trend in recent years and has altered the role of the audience member, turning them from an inert observer into an active and intrinsic part of the play itself.

The Drowned Man, a play set in Hollywood but which ran at London’s Temple Studios, was a perfect case in point, pretty much turning audience members into active parts of the story they were watching, as if they were themselves an avatar in a video game.

There is no doubt that, as gaming culture proliferates, audience members will become less willing to sit back and be passive observers. 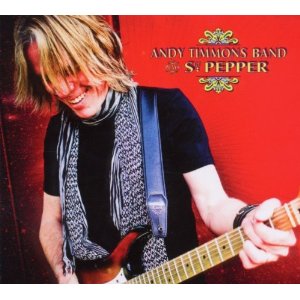 Every song on this album is just so strong and vibrant. Supposedly when working on this album, Andy Timmons did it all from memory and never once referenced the original album. Andy’s guitar work is stunning and totally jaw-dropping especially on tracks like “Within You Without You” and “The Benefit of Mr. Kite”. Usually when you have cover albums it is never true to the original but this one tracks along side the original and adds a new level of greatness.

What is also very cool as well is that Andy included the track “Strawberry Fields Forever”, which was original meant to be released on “Sgt. Pepper”. That rendition of the song is just breathtaking. If you are a fan of amazing guitar work or Beatles fan this is must. A MUST!

Track list:
1. Sgt. Pepper’s Lonely Hearts Club Band
2. With a Little Help From My Friends
3. Lucy In the Sky With Diamonds
4. Getting Better
5. Fixing a Hole
6. She’s Leaving Home
7. Being For the Benefit of Mr. Kite!
8. Within You, Without You
9. When I’m Sixty-Four
10. Lovely Rita
11. Good Morning, Good Morning
12. Sgt. Pepper’s Lonely Hearts Club Band (Reprise)
13. A Day In the Life
14. Strawberry Fields Forever