Media Mikes has teamed up with their friends at 20th Century Fox to give (35) fans in Kansas City the chance to be among the first to see the latest X-men adventure, “Dark Phoenix.”

The film will be shown on Tuesday, June 5th at the AMC Barrywoods Theatre in Kansas City. It will begin at 7:00 pm

All you have to do is click HERE. The first (35) readers to do so will receive a pass for (2) to attend the screening. This is a first come/first serve giveaway. Once all passes have been claimed, the giveaway has ended. GOOD LUCK! 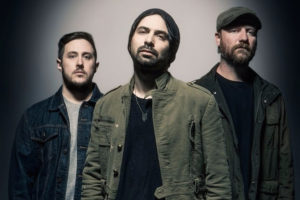 Matt Deis is the bassist for the recently reformed CKY. The band is set to release a brand new album on June 16th titled “The Phoenix” and will performing on this year’s Warped Tour. Media Mikes had the chance to speak with Matt recently to discuss the band getting back together, recording at the legendary Rancho De La Luna studio and what fans can expect from the band during this summer’s tour.

Adam Lawton: Can you give us some background on the reformation of CKY?

Matt Deis: A couple of years ago I stepped away from the band. This was around 2009/2010. I was having trouble juggling things at the time and just couldn’t do the band anymore. A couple years went by and during that time Chad and Jess had started working with Daniel Davies on vocals. Matt Janaitis who replaced me in the band wasn’t going to be able to work with the band anymore so the guys who I had never stopped being friends with called and asked if I could fill in on a few shows. We did some shows with Daniel but ultimately he chose to step away but suggested Chad should sing. From there things just kept going I was glad to be working with them again?

AL: Was doing a new album pre-planned or did this evolve over time?

MD: Things kind of evolved out of doing those shows together. We didn’t really have a set plan outside of knowing that we wanted to play again. Music is something I just know and having worked with the guys for so long everything felt very natural and we just went from there.

AL: Being this is the bands first undertaking as a three piece. What was the writing and recording process like?

MD: We got in a room and just starting jamming as a three piece band. When we were a four piece things were kind of very, cut and paste. Ideas were just sort of thrown out and pieced together. For “The Phoenix” we went to into this dirty warehouse with a very minimal amount of gear and wrote songs that fit the three of us. We didn’t try to get too crazy with the layers or anything like that. We just tried to make things sound good as a three piece. That was the real focus throughout recording. Chad had a lot of song structures figured out going in but there were holes that we all helped to fill in. We locked ourselves in the studio we rented for pre-production and just played. Everything was very natural.

AL: What was it like recording at the legendary Rancho De La Luna?

MD: For me personally I was just amazed that we got this opportunity. I had always seen it as this magical place for a select group of musicians so to be able to step foot there was a childhood dream. A lot of albums I grew up listening to were recorded there. Needless to say I was geeking out quite a bit. How it initially came about was Chad had gone out there with some friends and ended up falling in love with the place. When he brought it up about going out there both Jess and I were quick to say yes.

AL: The bands previous album “Carver City” had a unique concept to as it does “The Phoenix”. Can you tell us about that?

MD: The past albums did have a number of lyrical ideas and concepts attached to them. We didn’t do that consciously with “The Phoenix”. The phoenix in its most open interpretation is a mythical creature that rises from its ashes. That was sort of us as a band. We all had some things we needed to work through so there is a lot of re-growth and us individually over coming what we each had going on.

AL: Tell us about the bands first single “Days of Self Destruction”?

MD: We hadn’t intended on that song to be a single of any kind really. After meeting with our record label they felt that would be a good track to give out to fans. There really was no plan to give it the treatment like you would a single however the reception it received was so good that we just went from there. That song definitely has all the classic elements of CKY. It’s probably our most straight forward track off the album as it has big riffs, a big chorus and a big guitar solo at the end. For someone who has never heard CKY before the song is a good primer as it kind of showcases what we are all about.

AL: Can you tell us about the plans for the bands run on this year’s Warped Tour?

MD: I am really excited as I think this is one of the only remaining traveling tours of this size still happening. I remember being in High School and trying to see CKY on their first Warped Tour run in 1999. Things came full circle as Kevin Lyman the tours founder brought it up as he wanted to bring back bands from years past. We were in the early stages of recording at that point but the opportunity was too good to pass up. We figured everything was going to line up with the album release so we said yes immediately. The tour starts in Seattle so we are going to do a run through Canada before hand and just work our way over. We have such great Canadian fans so it should be a lot of fun. Coming off such a great UK run where 12 of the 13 shows sold out we really can’t wait to get out there here in the States. I think there are going to be a lot of people who get to see that maybe up until now only knew of us from an older sibling. Warped Tour tends to be a younger crowd and we aren’t sure who likes us these days (laughs) so this is going to be a great opportunity for us to meet a lot of new fans.

For more info on CKY head over to www.facebook.com/ckyalliance

It’s now official. The one and only Cher herself revealed that she will kick off her “Dressed To Kill” 49 city North American Tour beginning in Phoenix on March 22nd with stops in NY, LA, Boston, Las Vegas, and other major markets. Cher shared the happy news with her fans following her performance on the Today Show this morning.

A full list of “Dressed to Kill” tour dates and cities follows this release. The national tour promoter is Marshall Arts USA. For ticket information and to sign up for tour updates please go to Cher.com.

Cher’s previous tour “The Farewell Tour” later dubbed “The Never Can Say Goodbye Tour” was one of the most successful tours ever by a solo artist and played for a record-breaking 325 dates and seen by over 5.5 million people.

For all online tickets purchased (presale and general public), ticketholders will receive a free copy of Cher’s new album “Closer To The Truth”, out September 24th on Warner Bros Records.

Cher is in New York this week celebrating the album’s release with upcoming appearances on David Letterman (Sept. 24th) and Live! with Kelly & Michael (October 1st). Cher will also be appearing as a mentor with Blake Shelton on NBC’s The Voice airing in October.

(*American Express® Cardmembers can purchase tickets before the general public.*)