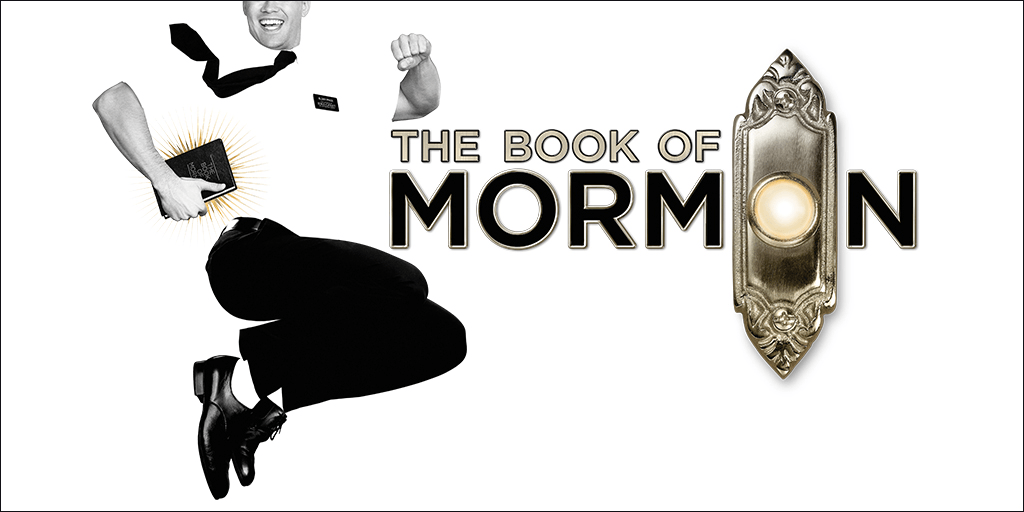 Making it’s third trip through Kansas City, the question has to be “Does ‘The Book of Mormon’ hold up?  Thank you, Heavenly Father, because the answer is a resounding “yes!”

Winner of nine Tony Awards in 2011, including Best Musical, “Book of Mormon” is the brain-child of “South Park” creators Trey Parker and Matt Stone, who conceived the production with “Avenue Q” composer Robert Lopez.

The show tells the story of two young missionaries, Elder’s Price (Kevin Clay) and Cunningham (Jacob Ben-Shmuel) , who are sent to Uganda to introduce Jesus Christ to the natives.  Of course, things don’t go the way they should, with results that can only be expected from the team that gave us “South Park” and “Team America.”

The production was well staged and the cast enthusiastic.  As was the audience, who erupted into applause when it was noted that “the Garden of Eden was in Jackson County, Missouri,” which is also where Kansas City is located. 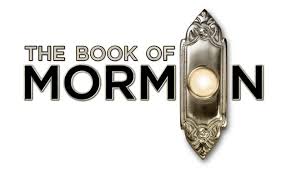 If you are a listener to our “Behind the Mikes” podcast (and if not, why aren’t you) you’ll recall that a few weeks ago we were talking about the most recent great original film musical. Not something like “Dreamgirls” or “Les Miserables,” which were translated from the Broadway stage, but a musical written just for the movies. The first one that popped into my mind was 1999’s “South Park: Bigger, Longer and Uncut.” From it’s opening song to it’s grand finale’, the film tells it’s story through virtually every style of music known to man. To say that Trey Parker and Matt Stone are talented would be an understatement. 12 years later, Parker and Stone teamed up with “Avenue Q” co-composer/co-lyricist Robert Lopez and have created one of the most entertaining and inspirational shows in Broadway history. “The Book of Mormon.”

In Utah a group of young men wait patiently. They have all spent months studying to go abroad to spread the word of God through their ministry, the Church of Jesus Christ of Latter Day Saints. Or, as they are more commonly referred to, the Mormons. As each pair of boys is named they learn their destinations. Japan. Norway. France. Exotic places all. Finally, only Elder Price (Gabe Gibbs), the highest regarded person in the group, and Elder Cunningham (Chad Burris), who is pretty much the opposite of Elder Price, are left. They soon find themselves teamed up and heading for beautiful….Africa. Two years in the jungles fighting aids and poverty. Woo hoo!

There isn’t a lot you can say for a musical that contains four letter words, Darth Vader and an image of a Hell that contains both Hitler AND Johnnie Cochran except this: IT’S BRILLIANT! The songs are both clever and catchy and the cast spectacular. Even the story, which many reading this may think mocks the Mormon faith, is uplifting. That’s a trifecta that very few shows ever hit.

As Elder Price, Gibbs brings a wide-eyed youthful joy to the role. He KNOWS that Heavenly Father is on his side. I was surprised to learn that Mr. Burris was actually the understudy for the actor scheduled to play Elder Cunningham. He was both funny and touching in his performance. And, if anyone ever decides to do a bio-pic on the late Chris Farley, I would hope that Burris would get an audition. He brings the kind of energy and innocence to the role as well as Farley ever did in his film performances. Other cast standouts include Bryce Charles (another stand-in) as Nabulungi and Sterling Jarvis as Mafala. The ensemble cast was also spot on, a tribute to the kind of shows that the Broadway Across America consistently bring to Kansas City.

Of course since, according to the show, the Garden of Eden IS located in Jackson County, Missouri, maybe the show got a little nudge from Heavenly Father!

The tour continues on through August 2017. Here are a list of it’s next few destinations:

When I lived in Baltimore it was easy for me to make the 3-hour drive to New York City to see the next great musical. “Phantom of the Opera.” “Les Miz.” “Miss Saigon.” It opened and I was there. Not so easy to do when you live in Kansas City. Which means I had to wait four years to see “The Book of Mormon.” And it was well worth the wait.

The show tells the story of two young Mormon missionaries who are sent to Uganda to help convert the local population into joining the church. Things are tough in Africa, with the villagers dealing not only with the AIDS crisis but a terrible thug dictator who insists that all women be circumcised. If right about now you’re questioningly thinking to yourself, “this is a BROADWAY musical,” I should point out that the show was created by the team behind “South Park,” Trey Parker and Matt Stone, as well as Robert Lopez, who created the Tony Award winning Best Musical “Avenue Q,” which is best remembered as the show that beat “Wicked” for the award. Mr. Lopez also recently won an Oscar for co-writing the song “Let it Go” from “Frozen.” The book is outrageous, and exactly what you would expect from the three authors. As for the songs…there’s a reason that the animated film “South Park: Bigger, Longer and Uncut” is often referred to as one of the best Broadway musicals that never made it to New York. The tunes are catchy, the lyrics infectiously funny. The audience loved every minute of it, with the highlight coming during the song “I Believe” when the singer exclaims, “And I believe that the Garden of Eden was in Jackson County, Missouri,” which is where Kansas City sits.

The cast was outstanding, with Billy Harrigan Tighe and A.J. Holmes excelling as Elder’s Price and Cunningham. The supporting players were equally good. The show was one of the most original I’ve ever seen, much deserving of the nine Tony Awards it won. Where else can you see Jesus Christ, “Star Trek’s” Lieutenant Uhura and Yoda all in the same musical number? No where else…that’s where! The show is so good that the Church of Jesus Christ of Latter-day Saints actually runs ads in the Playbill. If that’s not a divine blessing from Heavenly Father, I don’t know what is.

“The Book of Mormon” continues in Kansas City at the Music Hall through March 8th.