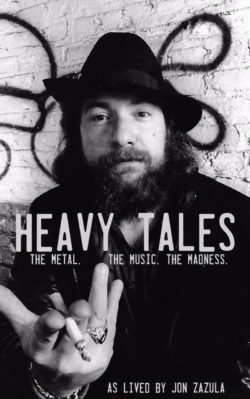 “Heavy Tales” details the stories of how one Jonathan Zazula better known as Jonny Z who went from living on the streets of the Bronx in New York City to managing and releasing albums by some of the biggest artists in heavy metal music including Metallica, Anthrax, Testament and Mercyful Fate. Together, Jonny and his wife Marsha built a musical dynasty out of modest beginnings unmatched by any other underground heavy metal label. With a foreword written by Testament vocalist Chuck Billy, plus over 100 rare photographs unearthed from the Mega-Vault and photographer friends worldwide, “Heavy Tales” is the definitive American story of a family man with a dream, determined to prove to the world that heavy metal belonged on the stage, in your car, on the radio, and in your living room.

Growing up around the college town of Ithaca, NY you would always hear rumblings of the fabled Pyramid Studios and how all these heavy metal bands from the city would make the five plus hour drive just to record there. A name that was often attached along with that of bands like Anthrax, Testament and Raven was Jonny Z. It wasn’t until sometime later when I myself had the chance to record at Pyramid Studios that I would go back and dig a little deeper in to the lore that surrounds Mr. Jon Zazula. “Heavy Tales” filled in all the gaps, lapses and holes as it is the story right from the horse’s mouth. With the help of Harold Claros-Maldonado, Jon tells you about how his rough upbringing and  keen business sense put him at the fore-front of the heavy metal invasion of the mid-eighties and into early nineties where he help orchestrate the early foundations of cross over Rap-Metal. Just reading the candid stories about Metallica’s early days (Pre-“Master of Puppets”) would have been more than enough for me but Z takes it further recounting numerous concerts, trips and pivotal first time meetings which until now were stories only heard by select few and/or those who lived it.

Counting in at just over 190 pages “Heavy Tales” is a quick read that wastes no time getting to the good stuff. The book and its authors give you just enough background to nicely set the stage for the bulk of each story. I had no problem reading this book in one sitting and the various photographs included in the book were a nice touch. If you grew up during the time period the book covers and was in to heavy metal you undoubtedly have a record that Jonny Z had a hand in and now is your chance to hear his story.