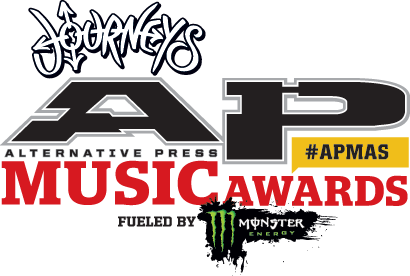 WITH LIVE PERFORMANCES FROM
WEEZER • PANIC! AT THE DISCO • ALL TIME LOW •

and many more to be announced!

APMAS TO BE BROADCAST LIVE ON AXS TV

Rock legends and four-time AP cover stars Weezer — whose 2014 album Everything Will Be Alright In The End is nominated for the prestigious “Album Of The Year” award — will serve as the evening’s headlining performance. “We’re incredibly excited to play for all of our fans at the APMAs this year!” said Weezer frontman Rivers Cuomo.

Additional live performances include Panic! At The Disco, Taking Back Sunday, Motionless In White, All Time Low, a special performance from New Found Glory featuring Hayley Williams, Echosmith, Halestorm and the Madden Brothers. The world-renowned Contemporary Youth Orchestra will also be returning to the APMAs to accompany many of the evening’s performances and event proceedings.

After a much publicized battle with health issues, Deryck Whibley and Sum 41 will be making their triumphant return to the stage with a much-anticipated comeback performance. Sum 41 frontman Whibley commented,  “Playing live is the heart and soul for us. It’s our chance to connect face to face with our fans, and I’m glad that we get to share our first experience back onstage again at the APMAs. It’s also exciting to be a part of the event to support the first magazine to put our ugly mugs on the cover in America!”

Fellow pop-punk superstars Simple Plan will also be making their much anticipated return to the stage after a three-year hiatus from the American stage. Simple Plan’s lead singer Pierre Bouvier captured the excitement best by saying, “We’re super excited to be part of the APMAs this year.  It’s like the ultimate party with all the bands we care about and the scene that we’re proud to be a part of.  We’re also stoked to finally be playing some new material in the U.S. for our fans that have been waiting for so long. It’s gonna be a hell of a night!”

Last year’s “Most Dedicated Fans” award recipients Black Veil Brides will return to perform a special set. Lead singer and Ohio native Andy Biersack commented “We are so excited to be a part of the 2015 APMAS! Last year, AP granted me not only the opportunity to perform with my heroes, but also to give back to the fans who have given us everything with the Most Dedicated Fan award! We are stoked to perform and would be honored to win. But most importantly, we can’t wait to see everyone there!”

The 2015 APMAs CATEGORIES, NOMINEES, and PRESENTERS are:

Artist Of The Year presented by Monster Energy Drink

Album Of The Year presented by Journeys

Every Time I Die • From Parts Unknown

La Dispute • Rooms Of The House

A Day To Remember

Panic! At The Disco

Song Of The Year presented by Epitaph Records

Sleeping With Sirens • “Kick Me”

Bring Me The Horizon • “Drown”

Crown The Empire (The Runaways)

Being As An Ocean

Jeremy McKinnon (A Day To Remember)

Jordan Buckley (Every Time I Die)

Kevin Skaff (A Day To Remember)

Dallon Weekes (Panic! At The Disco)

Voting on all awards begins today via www.altpress.com/apmas, in addition to the “Best Music Video” award, which can be voted upon exclusively at any Journeys retail location via voter mobile device and store-provided QR codes or via journeys.com/bestmusicvideo. Voting ends on July 6, 2015.

A limited amount of discounted early bird tickets as well as VIP packages, Monster travel packages and pit tickets will go on sale Friday, April 3 at 10:00 am EDT. Both the VIP and Ultimate Monster packages will include exclusive merch limited APMAs merch, premium seating, early entry and more. Head to www.altpress.com/apmas for all the ticket offerings and details.

The APMAs are very pleased to announce brand new partnerships with several of today’s leading companies, including retail, technology, merchandise, music industries and more. This year’s new title sponsor is none other than Journeys, the leader in the teen-specialty retail scene focused on lifestyle-driven branded footwear and accessories with 850 stores across all 50 states, Puerto Rico and Canada. The APMAs are thrilled to include Journeys as their title sponsor and official retail partner for the 2015 APMAs.

Kari Irons, Senior Vice President of Marketing at Journeys says, “Journeys is excited to join the 2015 & 2016 AP Music Awards as the title sponsor. Music has been in our DNA since we opened our first store in 1986. Through our two-year partnership, we’re able to capture exclusive content and customize unique campaigns and contests  — all to support our employees, our core consumers and a talented community of artists. We’ve worked with Alternative Press for several years as an advertiser, and are looking forward to building upon an already stellar relationship.”

In addition, this year’s APMAs is once again joined by lead presenting sponsor Monster Energy Drink, who will be energizing the event by hosting meet & greet experiences for the APMAs fans with top-tier talent from the rock ’n’ roll world.

The 2015 APMAs are proud to team up once again with official broadcast partner AXS TV. Last year’s award show marked the highest social engagement in the channel’s history. The APMAs are looking forward to another successful year.

Don’t miss the 2015 AP Music Awards! Check back to www.altpress.com/apmas over the coming weeks for more announcements and information.

Now in its 30th year, Alternative Press continues to be on the forefront of discovering new artists, breaking news and reporting on the latest trends in music and youth culture. Since its early days as a pasted-up fanzine in the mid-’80s, Alternative Press is one of the largest music magazines in the world. AP provides in-depth interviews and exclusive photos, making it an essential collectors piece for a passionate fan base, as well as digitally through various mobile and tablet formats. AP has expanded its digital reach via an enhanced mobile app and Altpress.com, one of the world’s fastest-growing websites. The site has become a necessary destination for up-to-the-minute breaking news, coverage from our national APtv correspondents, exclusive multimedia premieres and much more. Additionally, the brand has been successfully extended through live events, beginning with the launch of the AP Tour and the company’s inaugural AP Music Award Show, which trended No. 1 worldwide on Twitter and Facebook. Independently owned and operated, AP continues to reach millions of fans, offering them insight to the hottest artists and cultural trends first.

Journeys is a leader in the teen specialty retail scene, with more than 850 stores in all 50 states, Puerto Rico and Canada. Journeys uses fashion savvy and merchandising science to keep in step with the fast-paced footwear and accessories market for 13- to 22-year-old guys and girls. Journeys offers a wide variety of trendy, relevant brands that cater to teens who seek the hottest, new styles. The Journeys store is more than a retail environment; it’s an extension of the teen lifestyle. From the plasma TVs playing exclusive content and the latest music videos, to the visual merchandising strategy and promotions, to the employees whose image and style reflect the customers’ lifestyle and attitude. In addition, Journeys reaches its customers through www.journeys.com, a mobile website, catalog, national advertising, strategic cross-promotions, social media and grass-roots events like The Journeys Noise Tour. Journeys is, in every way, an attitude you can wear!

Most companies spend their money on ad agencies, TV commercials, radio spots and billboards to tell you how good their products are. At Monster Energy, we chose none of the above. Instead we support the scene, our bands, our athletes and our fans. We back athletes so they can make a career out of their passion. We promote concert tours, so our favorite bands can visit your hometown. We celebrate with our fans and riders by throwing parties and making the coolest events we can think of a reality. www.monsterenergy.com | www.facebook.com/monsterenergy

About the Rock and Roll Hall of Fame and Museum:

The Rock And Roll Hall Of Fame And Museum’s mission is to engage, teach and inspire through the power of rock and roll. The institution carries out its mission by giving voice to the stories of the people, artifacts and events that shaped rock and roll — through Museum exhibits, materials in the Museum’s Library and Archives, traveling exhibitions, and a wide array of innovative educational programs and activities. The 150,000 square-foot Rock and Roll Hall of Fame and Museum, located in Cleveland’s rapidly developing North Coast Harbor, is home to major artifact collections, four state-of-the-art theaters, and year-round educational and concert programming.

The Museum is open seven days a week from 10 a.m. to 5:30 p.m. On Wednesdays (and Saturdays through Labor Day), the Museum is open until 9 p.m. Museum admission is $22 for adults, $18 for adult residents of Greater Cleveland, $17 for seniors (65+), $13 for youth (9-12), children under 8 are free. A 6% Admission Tax that goes to support Cleveland Metropolitan Schools is added to each ticket at purchase. Museum Members are always admitted free, for information or to join the membership program call 216.515.8425. For general inquiries, please call 216.781.ROCK (7625) or visit http://www.rockhall.com.  The Ohio Arts Council supports the Rock and Roll Hall of Fame with state tax dollars to encourage economic growth, educational excellence and cultural enrichment for all Ohioans. The Museum is also generously funded by Cuyahoga County residents through Cuyahoga Arts and Culture.