Superheroes may have been big business at the box office for a number of years now, but 2019 has the comic book movie genre undoubtedly reach all-new heights.

Avengers: Endgame eventually managed to unseat Avatar to become the highest-grossing movie of all-time at the end of July, with the moment undoubtedly highlighting how Marvel Studios has become an absolute blockbuster powerhouse. Of course, one obvious question has been raised by that level of success – just how do you go about topping it?

Plans for the future

The future of the Marvel Cinematic Universe (MCU) has certainly been left in an intriguing position.

After all, Endgame is likely to prove to be the swansong for a host of characters who have anchored Marvel Studios movies in recent years. Without getting into spoilers that includes Steve Rogers and Tony Stark, although Spider-Man: Far From Home certainly offered up a tantalising glimpse as to how the latter’s position as a genius inventor and one of the richest characters from fiction could mean he still has an influence on proceedings to come.

However, it is fair to say the departure of a few key players does open the MCU up to some fresh blood and the recent announcements made at Comic-Con in San Diego certainly highlight that there are plenty of plans for the future. Here, we look at just a few of the things we are most excited about.

While Natasha Romanoff has featured in a raft of the MCU’s best-loved blockbusters, she has had to wait a long time for her own moment in the spotlight. Scarlett Johansson has been a lynchpin of the franchise and she thoroughly deserves to be put front and center in a standalone adventure.

Wesley Snipes has become synonymous with Blade through the years and it was always clear that a big name would be needed if the character was ever to be rebooted. Well, Marvel has really pulled it out of the bag in style with the casting of Mahershala Ali and even his predecessor can’t wait to see him in action.

Natalie Portman did not have a great deal to do in the first two Thor films and then she was overlooked entirely when the God of Thunder went cosmic in the brilliant Ragnarok. However, she looks set to play a pivotal role in the series’ fourth outing, as she is intriguingly set to become Mighty Thor in the movie.

4. Will The Eternals be a success?

Marvel has a strong history of introducing its lesser-known characters to the big screen with major success, but can they pull the trick off once again with The Eternals? The big-name cast including Angelina Jolie, Salma Hayek, Brian Tyree Henry and Richard Madden could certainly help the movie’s cause.

Plenty to look forward to

There is so much to look forward to in the next phase of the MCU and we haven’t even touched upon the slate of TV shows that are being made or the big-screen debut of Shang-Chi and the eagerly anticipated Doctor Strange sequel.

Marvel Studios is arguably at the top of its game right now and it will be fascinating to see whether these adventures will help them keep it going for years to come. 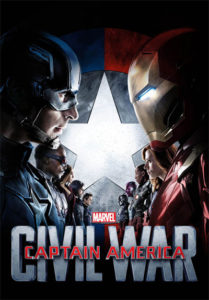 Warner Bros. worst nightmare has come true. A much better comic book movie has been released with Batman V. Superman: Dawn of Justice still fresh in moviegoers minds. Actually, let me take that statement back. A near-perfect comic book movie has been released a month afterBatman V. Superman: Dawn of Justice, further solidifying Zack Snyder’s cinematic attempt as the shiny turd it is. Warner Bros. executives listen up. Purchase a ticket to Captain America: Civil War and see how comic book movies are really done.

This doesn’t feel like a Captain America movie, but more like a prequel to the next Avengers movie, and that’s perfectly fine. The loss of life and human casualties has finally caught up to the Avengers as the Secretary of State and the United Nations demand authority over the team. Tony Stark/Iron Man (Downey) is soaked in guilt, feeling that he’s done more harm than good. He believes the Avengers need a leash before they gallivant around the world fighting evildoers.

On the flip side of the coin is Captain America (Evans). He believes politics, as well as the looming threat of Hydra’s infiltration, would inhibit their ability to save the world at the drop of a hat. Both sides have their merits, but Captain’s opinion is tossed out the window when Bucky, the Winter Soldier (Sebastian Stan), commits a terroristic act at the U.N. killing dozens. Captain and Tony are at ends after this. Tony wants Bucky taken in and imprisoned, or killed, and Captain rightfully suspects something else is at work.

While Age of Ultron felt overwhelmed with over a dozen characters to juggle, Civil War seems to handle it with a calm demeanor. Even the introductions of Black Panther (Chadwick Boseman) and Spiderman (Tom Holland) are fluid, fun, and properly handled. The additions of a sleepy Ant-Man (Paul Rudd), a conflicted Scarlet Witch (Elizabeth Olsen), a stoic Vision (Paul Bettany) and a handful others never overwhelms the viewer.

For Marvel fans who’ve watched every movie, and possibly every show, their fan service is paid off throughout. As for the villain; He appears to be a little lacking, but upon further inspect, the bad guy says a lot about the fabric of comradery between the Avengers and how easily it can rip. It seems like every Captain America is a game changer. The first prefaced the Avengers assembling. The second movie scrapped S.H.I.E.L.D. to its bare bones. Now Civil War rearranges the chess board after flipping it off the table.

I feel like I say this nearly every time a new Marvel movie is released, but Marvel has seriously outdone themselves once again. Civil War is a near-flawless cinematic experience that neatly packages one of the most pivotal story lines in comic book history. As for what Marvel has up its sleeve before 2018’s release of Avengers: Infinity Wars, is anyone’s guess. But I assure you it’s in good hands. The same directors and writers behind Civil War are piecing together the next Avengers and if this movie is any indication, it’s going to be fantastic, if not a satisfying conclusion to decades of story building. I wish I could tell you more about Civil War, but it’s something you’re just going to have to see for yourselves. Like, right now.