Superheroes may have been big business at the box office for a number of years now, but 2019 has the comic book movie genre undoubtedly reach all-new heights.

Avengers: Endgame eventually managed to unseat Avatar to become the highest-grossing movie of all-time at the end of July, with the moment undoubtedly highlighting how Marvel Studios has become an absolute blockbuster powerhouse. Of course, one obvious question has been raised by that level of success – just how do you go about topping it?

Plans for the future

The future of the Marvel Cinematic Universe (MCU) has certainly been left in an intriguing position.

After all, Endgame is likely to prove to be the swansong for a host of characters who have anchored Marvel Studios movies in recent years. Without getting into spoilers that includes Steve Rogers and Tony Stark, although Spider-Man: Far From Home certainly offered up a tantalising glimpse as to how the latter’s position as a genius inventor and one of the richest characters from fiction could mean he still has an influence on proceedings to come.

However, it is fair to say the departure of a few key players does open the MCU up to some fresh blood and the recent announcements made at Comic-Con in San Diego certainly highlight that there are plenty of plans for the future. Here, we look at just a few of the things we are most excited about.

While Natasha Romanoff has featured in a raft of the MCU’s best-loved blockbusters, she has had to wait a long time for her own moment in the spotlight. Scarlett Johansson has been a lynchpin of the franchise and she thoroughly deserves to be put front and center in a standalone adventure.

Wesley Snipes has become synonymous with Blade through the years and it was always clear that a big name would be needed if the character was ever to be rebooted. Well, Marvel has really pulled it out of the bag in style with the casting of Mahershala Ali and even his predecessor can’t wait to see him in action.

Natalie Portman did not have a great deal to do in the first two Thor films and then she was overlooked entirely when the God of Thunder went cosmic in the brilliant Ragnarok. However, she looks set to play a pivotal role in the series’ fourth outing, as she is intriguingly set to become Mighty Thor in the movie.

4. Will The Eternals be a success?

Marvel has a strong history of introducing its lesser-known characters to the big screen with major success, but can they pull the trick off once again with The Eternals? The big-name cast including Angelina Jolie, Salma Hayek, Brian Tyree Henry and Richard Madden could certainly help the movie’s cause.

Plenty to look forward to

There is so much to look forward to in the next phase of the MCU and we haven’t even touched upon the slate of TV shows that are being made or the big-screen debut of Shang-Chi and the eagerly anticipated Doctor Strange sequel.

Marvel Studios is arguably at the top of its game right now and it will be fascinating to see whether these adventures will help them keep it going for years to come.

This morning, during a special event at the El Capitan Theatre in Hollywood, Marvel Studios President Kevin Feige revealed the films that will make up Phase 3 of the Marvel Cinematic Universe, featuring a mix of fan-favorite characters and several heroes who will be making their big-screen debuts.

The next two films to be released by Marvel are AVENGERS: AGE OF ULTRON on May 1, 2015, and ANT-MAN on July 17, 2015. Marvel revealed the dates and titles of nine additional films through 2019, including upcoming Captain America, Thor, Avengers and Guardians of the Galaxy installments, along with films featuring Black Panther – who, Feige announced, will be played by Chadwick Boseman – Captain Marvel, Doctor Strange, and the Inhumans.

The announced films are as follows:

Ten films have already been released in the Marvel Cinematic Universe, beginning with 2008’s IRON MAN. All 10 films opened at #1 domestically and have collectively grossed over $7.1 billion globally.

Earlier this year, Marvel’s CAPTAIN AMERICA: THE WINTER SOLDIER, which broke the April opening domestic record with $95 million, earned $714 million worldwide and is the #5 film of 2014. Most recently, Marvel’s GUARDIANS OF THE GALAXY crossed $757 million globally after opening with a domestic August record of $94.3 million and setting an October debut record in China, where it has now grossed nearly $90 million. It’s the #1 film of the year domestically and the #3 film worldwide. 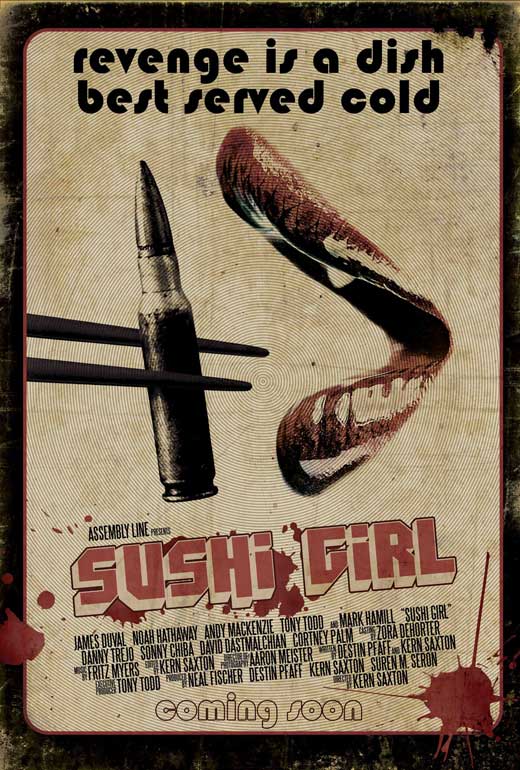 Los Angeles, CA – August 1, 2012 – The Wagner/Cuban Company’s Magnolia Home Entertainment and Phase 4 Films announced today they have jointly acquired North American rights to the Mark Hamill film SUSHI GIRL. The revenge thriller had its international premiere at the Fantasia International Film Festival on July 21st 2012, to be followed by a theatrical release in the U.S. and cable VOD by Phase 4 Films in late 2012, with Blu-ray™, DVD and digital VOD release by Magnolia Home Entertainment under the Magnet Releasing label in early 2013. Phase 4 Films will also distribute the film theatrically and on home video in Canada.

The hotly anticipated genre-bending thriller by director Kern Saxton (co-writer of the film along with Destin Pfaff) is produced by Assembly Line, a team including Neal Fischer, Pfaff, Saxton and Suren M. Seron, in association with Level Up Productions.

The film centers on the compelling character of a man called “Fish,” just released after six years in jail after successfully not ratting on those involved in the robbery that sent him to prison. The night he is released, the men he protected with silence celebrate his freedom with a congratulatory dinner. The meal is a lavish array of sushi, served off the naked body of a beautiful young woman. The sushi girl seems catatonic, trained to ignore everything in the room, even if things become dangerous. Sure enough, the unwieldy thieves can’t help but open old wounds in an attempt to find their missing loot, with violent results.

“We both loved the film so much that teaming up was the only option,” said Larry Greenberg, SVP Acquisitions of Phase 4 Films.

“It was a long battle to get the right distribution for this film, but we are extremely happy with how our partners have worked together with us to create a win for everyone involved,” said Suren M. Seron of Assembly Line. 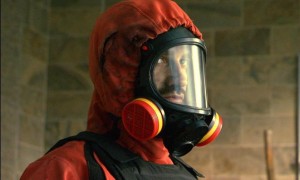 The idea an epidemic is at no shortage in film in the recent days with films like “Contagion” and “[REC]”. This film isn’t focusing on the scares of films like “[REC]” series and has a little more comedy. The film is setup in the beginning to be pretty interested but it falls short a little in the middle. This film was picked up by Bloody Disgusting Selects who has picked up fellow foreign imports like “Rammbock: Berlin Undead” and “Coldfish”. If you are looking for a film about building under quarantine I would watch “[REC]” over this.

The story focuses around Coco (Daniel Hendler) and his pregnant wife Pipi (Jazmin Stuart), who become quarantined in there apartment complex when an epidemic hits Argentina. They soon find that some of their neighbors are hunting and accusing each other. Coco gets involved with his neighbor who is trying to help him but things get out of control when one of the other neighbor starts going on a killing spree.

The film is very low-key and doesn’t really go much into the epidemic. There are no zombies or infected people attacking anyone. The most action in the film takes place towards the end when the neighbors go out on a shoot out but besides that nothing much else happens. The extras only really include deleted scenes, which doesn’t add much more. I watched film in English dub and I thought it was pretty decent unlike most subbed films. Overall the film doesn’t deliver past the first thirty minutes or so and leave you wanting more.