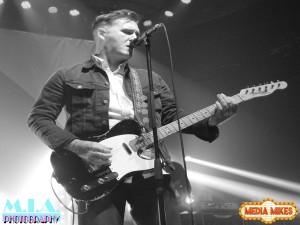 The Gaslight Anthem brought their unique brand of rock to the intimate Town Ballroom in Buffalo, NY on September 17th where they performed to a sold out crowd. The New Jersey based band is currently out on the road in support of their new album titled “Get Hurt”. Also on the bill for the evening was Against Me! and Twopointeight. The night much like the venue was packed full of great music that electrified the audience from the very start.

As the venue quickly neared capacity for the nights sold out show the band Twopointeight promptly took the stage. Hailing from Stockholm, Sweden the 4 piece band played a mixture of punk infused rock that was two parts Bruce Springsteen and two parts Joe Strummer. Vocalist/guitarist Fredrik Georg Eriksson commanded the audience’s attention while he and his group blasted through a fast paced 20 minute set. Next up was Against Me! who continue their relentless line of touring in support of the groups “Transgender Dysphoria Blues” album. Though the bands set was only 45 minutes Laura Jane and the boys packed as much goodness as they could into that time frame. The set was a perfect mixture of new and old with the biggest applauses coming during songs like “I Was a Teenage Anarchist”, “Thrash Unreal” and “True Trans Soul Rebel”. Despite being on the road since January the group still sounded strong and appeared full of energy which the crowd seemed to really enjoy.

The Gaslight Anthem would take the stage to close out the night with an ambitious 2 hr set packed full of TGA classics along with tracks off the group’s newest album “Get Hurt” which was released in August. In between songs front man Brian Fallon playfully interacted with the capacity crowd which acted as the icing on cake. Set highlights included the upbeat “45”, “Helter Skeleton” and “Blue Dahlia”. The band closed out the night with a 4 song encore that included some of the group’s most popular tracks however noticeably missing was the bands cover of The Who classic “Baba O’Riley” which the band has been using recently to end the night. The band will be out on the road both in the States and in Europe through November so if you haven’t already made plans to catch one of the shows I strongly urge you to do so as you won’t want to miss out on a great night of music.

“Sailcloth” starring Oscar® nominee John Hurt, selected for 2012 Academy Short Film Award consideration
SAILCLOTH – starring world-renowned actor John Hurt – is a heartfelt story of an elderly gentleman who disappears from a nursing home. The 18-minute non-dialogue film, written and directed by Elfar Adalsteins, is already an award winning film having picked up the Grand Jury Prize for Best Short Film at the Rhode Island International Film Festival to a standing ovation. Subsequently, the film has gone on to get a recommendation for the 2012 Academy Short Film Awards.

Sailcloth shares the poignant story of an elderly widower, played by Hurt, as he sets in motion a series of events to hide his disappearance from a nursing home. After gathering necessities he heads to the local pier where a beloved companion awaits him – ready to take their last great journey.

John Hurt, one of the UK’s most legendary actors, stars in this emotional film portraying the widower with a natural ease that effortlessly pulls you into. Hurt, a two time Academy® Award Nominee, has won countless accolades during his extensive career, including three BAFTA’s and a Golden Globe.

This Oscar worthy film is written and directed by Elfar Adalsteins (www.elfaradalsteins.com) and produced by his company Berserk Films. Elfar’s began his career as a producer, working on feature films such as ‘Country Wedding’, the Oscar® longlisted ‘Mamma Gógó’ and ‘Black Rabbit Summer’ he developed in collaboration with Ruby Films. Elfar’s directorial feature film debut is currently in the final stages of development and is scheduled to move into production in 2012.

With John’s wonderful portrayal of the widower and Elfar’s expertly realized vision, it is no wonder that this emotional story of love and courage is causing such an Oscar Buzz.

UNIVERSAL CITY, CA – With the famous words, “Call me Ishmael,” begins the spectacular adaptation of Herman Melville’s novel, considered the greatest work of American literature, MOBY DICK, arriving in brilliant Blu-ray and DVD October 4 from RHI Entertainment and Vivendi Entertainment. A two-part original miniseries event that premiered August 1 & 2 on Encore, the New York Times calls it “an ambitious, beautifully made adventure tale that seeks to be respectful of the book while still making the characters and story accessible to modern viewers,” and the Wall Street Journal adds, “there is much to marvel at in this production.”

A psychological thriller of one man’s decent into madness, the story begins when inexperienced sailor Ishmael (Charlie Cox, Stardust) joins the crew of the whaling ship Pequod helmed by the mysterious and tortured Captain Ahab (Hurt). Though the journey at first appears to be a routine whaling quest, the crew soon is unwittingly forced to join Ahab in his singular purpose – to hunt and kill the enigmatic white whale, which nearly killed him years before. As they sail across the desolate ocean, Ahab’s obsession to seek the deadly whale they call Moby Dick, no matter the cost, soon proves fatal. Never straying from his quest to hunt and kill the monstrous whale, the crew realizes that their captain is so blinded by vengeance that he may soon lead them all to an ultimate peril.

Synopsis:
Ishmael sees his dream of a whaling voyage come true when he joins the crew of the Pequod, a sailing vessel leaving port in Nantucket. Unbeknownst to Ishmael and the mates, the Pequod’s megalomaniacal Captain Ahab is taking them all on a mad and personal mission to slay the great whale Moby Dick—an obsession that will open their eyes to the wonder and spectacle of man, of beast, and the inescapable nature of both in this epic retelling of Herman Melville’s masterpiece.