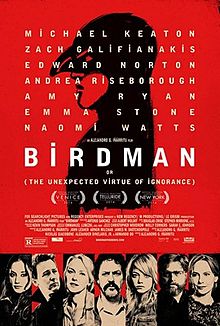 “Birdman or (the Unexpected Virtue of Innocence)” and “The Grand Budapest Hotel” took home the lion’s share of Oscars this evening during the presentation of the 87th Annual Academy Awards.

“Birdman” took home three of the major awards, being named the evening’s Best Picture while Alejandro Gonzalez Innaritu took home the award as Best Director. Innaritu also shared the award (with three others) for Best Original Screenplay. The film also received the award for Best Cinematography, the second win in a row for Emmanuel Lubezki, who won last year for “Gravity.”

Eddie Redmayne was recognized as Best Actor for his portrayal of Steven Hawking in “The Theory of Everything” while Julianne Moore, nominated four times previously, was named Best Actress for “Still Alice.” In the supporting categories, J.K. Simmons won the Best Supporting Actor trophy for “Whiplash”, with Patricia Arquette receiving the Best Supporting Actress prize for her work in “Boyhood.” It was the only award the film won out of six nominations. Both Simmons and Arquette had swept the previous award programs so their wins weren’t that unexpected.

In addition to Simmon’s win, “Whiplash” took home Oscars for Best Sound Mixing and Best Film Editing. The Adapted Screenplay prize went to Graham Moore for “The Imitation Game.” Moore gave a well received acceptance speech recalling a suicide attempt as a youngster and the conviction to be yourself. Another emotional moment came when Common and John Legend performed their song, “Glory,” from the film “Selma.” A few moments later they received the Oscar for Best Song. Another highlight of the evening had Lady Gaga performing a musical tribute to the film “The Sound of Music,” which is celebrating it’s 50th Anniversary this year.

Host Neil Patrick Harris was not as well used as he has been in the past on other award programs, most notably the Tony Awards. Like Ellen Degeneres last year, he basically introduced presenters and bantered a little with the audience. Hopefully Billy Crystal’s schedule will be open next year!

BEST ACTOR – Eddie Redmayne – “The Theory of Everything”