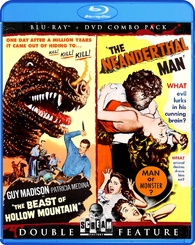 When you see the cover art for Scream Factory’s latest double feature it no question just screams cheese! The 1950’s delivered some really great creature features and it also produced films like “The Beast of Hollow Mountain and The Neanderthal Man”. These films are not the worst for sure but they not the best either. I call these fun, kick back, drive-in films. These are maybe not in the cinematic term of classics but these remind me of films they show trailers for at Disney’s Sci-Fi Diner at Hollywood Studios.  So for what it is worth these still are able to draw me in.

Official Premise: “The Beast of Hollow Mountain” (1956): An American cowboy living in Mexico discovers his cattle is being eaten by a giant prehistoric dinosaur. “The Neanderthal Man” (1953): A mad scientist transforms himself into a prehistoric caveman*his cat into a saber-toothed tiger and his housekeeper into an ape person*which does not enhance his popularity.

Willis O’Brien may not be as well known as Harryhausen but he was still a big name when it comes to stop motion animation and it is well represented here on the Blu-ray for “The Beast of Hollow Mountain”. Scream Factory did a good job with this film’s 1080p transfer presented with an aspect ratio of 2.33:1. This CinemaScope production, which blended live-action and stop motion, is not perfect and shows its age but still acceptable for this type of film.  The DTS-HD Master Audio Mono also works for this film with the dialogue and roars from our dinosaur. There are no special features included for this film.

“The Neanderthal Man” has a few more problems than “The Beast of Hollow Mountain”. The 1080p transfer comes with an aspect ratio of 1.35:1, which is altered from previous releases. The special effects do not hold up as well within this high-def release but it almost adds a cheesy yet fun factor to it. This film also gets a DTS-HD Master Audio Mono track which works quite well and is strong with the film’s score. There are no special features included for this film either.