EL SEGUNDO, Calif – “Are you ready kids?” Just in time for the 20th anniversary of SpongeBob SquarePants, Alpha Group, the global master toy partner of Nickelodeon’s iconic and top-rated animated series, is introducing a brand-new, never-before-seen product line. Building upon two decades of incredible SpongeBob content and fandom, these toys have evolved from the conventional preschool toy range and are certain to excite a multi-generation fan base – Kids, Tweens, Teens and Millennials. The company’s imaginative range includes collectible pop culture figures, fun-loving novelties, plush and – for the first-time ever – SpongeBob toys that include Nickelodeon Slime! SpongeBob SquarePants has emerged as a global pop culture phenomenon since first premiering on Nickelodeon in July 1999. The series has been the most-watched animated program for more than 17 consecutive years, is seen in over 208 countries and translated in more than 55 languages. The Spring line up hitting retail now is as follows:

Slimeez with Nickelodeon Slime Experience the world of Bikini Bottom like never before with SpongeBob Slimeez Figures! Load each 3-inch figure with Nickelodeon Slime (included), push and watch the ooey gooey Slime ooze through the figures. Six figures are available this spring at Target, each packaged with 2oz. Slime and collectible SpongeBob cube for the ultimate blind package experience. Will you find the rare Gold SpongeBob Slimeez? Seven figures debut in Fall. Ages 6+, SRP: $6.99 – Slimeez in action :

SpongeBob StretchPants Play with SpongeBob in a crazy new way! Stretch his arms and legs to activate over 20 unique silly sounds and phrases from SpongeBob himself! Parents, siblings and friends can join in the fun by grabbing an arm and a leg. Keep pulling to hear what he will say next! The more you pull, the funnier he gets! Available on Amazon and Target for ages 4+, SRP: $24.99.

SpongeHeads Young-and-old alike, dress up as your favorite SpongeBob SquarePants characters with the 20-inch soft, inflatable head wear! Made to fit most kid and adult heads, Sponge Heads allow fans of all ages to show off their favorite characters in a silly fashion statement! Let the party begin! Available on Amazon and Target for ages 6+, SRP: $12.99

SpongePop CulturePants The 4.5-inch vinyl collectible figures celebrate and capture iconic pop culture in a unique SpongeBob way. The Spring line includes B-Movie SpongeBob, Patrick and Dr. Plankton, based on the horror episodes from the show, as well as Old Timey SpongeBob, Patrick and Squidward in an all-new timeless style inspired by the golden age of animation. Available on Amazon for ages 6+, SRP: $9.99 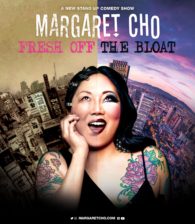 Five time Grammy & Emmy nominated comedian Margaret Cho has much to celebrate as she was recently named one of Rolling Stone magazine’s 50 Best Stand-Up Comics of All Time and is set to launch what is sure to be her sickest stand-up comedy show to date this fall. A pioneer amongst women in comedy, Margaret doesn’t take anything for granted as she continues to tackle difficult subjects with sensitivity and her razor sharp insight with her takes on addiction, abuse, activism and Asianness. It’s all about the politics of disgust and what is disgusting about politics. Aptly titled, “Fresh Off The Bloat,” Margaret says, ““Fresh Off The Bloat” is my sickest show to date. My grandmother said “You look like bloated as if you’ve been found dead in a lake after several days of searching.” Koreans are the most savage of all the Asians. My new show is all about being fresh off drugs and drinking and suicide and coming back to life – finally fished out of the river Styx. It’s meta. It’s magical. It’s me.”

The initial “Fresh Off The Bloat” tour dates go on sale Friday, July 21 here: http://margaretcho.com/tour/ – Please note that the December 6 show in Belgium will go on sale July 20. Additional dates to be announced in the coming weeks.

Margaret’s new TV project Highland has been picked up for pilot by TNT Network. Highland will chronicle what happens when two extended, dysfunctional Korean-American families who share the same patriarch must come together after tragedy strikes. As it turns out, the most reliable person in both families is the one who just got out of rehab.
“Executive producer Liz Sarnoff (Lost,Barry) and Margaret Cho’s brilliant script exposes Margaret’s warm heart and bracing humor, balancing powerful emotional truths with laugh-out-loud scenes and characters,” said Sarah Aubrey, executive vice president of original programming for TNT. “Highland continues TNT’s commitment to bringing diverse voices and worlds to television. We look forward to making a pilot with such a singular talent as Margaret Cho.”

Sneakers on Media Mikes? That’s right you are reading correctly. We are in the midst of a huge expansion and New Balance was the first to back us up with this new expansion. If it wasn’t for companies like this, we wouldn’t be able to pursue our plan. When I started Media Mikes in 2010 (then called only Movie Mikes), I emailed for an interview with a little known celebrity named Denzel Washington. He was completely out of my reach and I thought I would have no chance but I ended up getting it and it helped launch the site and set it above every other starter site. Almost five years now have past and we are expanding again!

Anyway back to New Balance’s amazing new sneaker, the Fresh Foam 980 series. This running shoe was only released a few months ago yet is already an award winner. It was awarded “Best Ride” in the Competitor Magazine Spring Shoe Guide (March 2014) and “Best Neutral Running Shoe” by Running Network (March 2014). The cushioning is very impressive. The Fresh Foam 980 is a really stable shoe and yet doesn’t smother you. You have plenty of room to breath through its mesh lining.

If you are looking for a sneaker that has amazing performance in speed, cushioning, stability and control, then you need to look no further. I went on a mission to find a “good pair” of sneakers earlier this year and honestly, I failed miserable. I ended up bunch a brand of sneakers that were “expensive”, so it had to be good right? Wrong! i ended up returning them within a few weeks. I wish these would have been released when I was looking earlier this year. Luckily now, I am able to spread the word and make it easier for others to make a good decision.

Thanks to New Balance, we received these amazing new sneakers in the color Silver with Lime & Navy, which look quite awesome. But it doesn’t end there since they have ten different colors options. There is Blue with Green Gecko & Neon Orange, Dark Heather Grey with Red & Yellow, White with Cobalt Blue & Green Gecko, Black with Lime Green & Blue, White with Neon Green, Orange with Blue, Black with Metallic Silver & White, Lead with Laser Blue & Black and Grey with Black.

There is something about the look that is actually very pretty, as my two year old daughter again. I love the color fad line leading above the sole, it looks so awesome. The soles have a solid strong color, which is just as bold as the shoe is and is made out of blown rubber. So if you are looking to get back to running after the summer and looking for a good sneaker to accompany you, I believe I easily help make your search process much shorter…the hardest part will be to figure out which awesome color you want.