“The Night Manager” recently completed its first series run in the UK to much critical acclaim and strong ratings throughout. Fortunately for American viewers, the series gets its stateside premiere tonight on AMC. Based on John Le Carré’s 1993 novel of the same name, “The Night Manager” follows Jonathan Pine (Tom Hiddleston) an ex-soldier-turned-titular-customer-serviceman in a posh Egyptian hotel. He’s presented with the opportunity to help British Intelligence agent Angela Burr (Broadchurch’s Olivia Colman) take down jet-setty guest and illegal arms dealer Richard Roper (a superbly sinister Hugh Laurie) from the inside of his operation out. Outraged by Roper’s behavior, and with some very personal motivations as well, Pine swiftly accepts. What follows is a taut spy thriller that features an amazing cast that also includes Elizabeth Debicki and Tom Hollander.

The series premiere screened this weekend as part of the Tribeca Tune In series celebrating television. I caught up with Hiddleston and director of the series, Susanne Bier, for a quick chat on their red carpet. 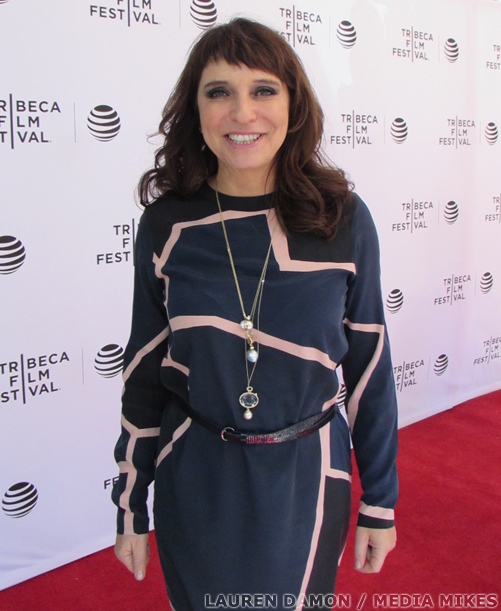 Susanne Bier is an Oscar winning director (2011’s Best Foreign Language film, In a Better World) who was eager to take on this project in any capacity. “Well I mean, this project I would have done had it been a puppet show!” Bier enthused, “Because I love John Le Carre and I love the novel. But I was also very tempted to do TV. I mean the format of doing six hours as opposed to two hours was just really tempting and really interesting and compelling.”

With the show having already gone over so well in England, Bier was looking forward to opening it up to a new audience and maybe a new perspective on it:  “I think there’s always different perspectives. I mean American audiences are responding just as [excitedly] about it up til now, so I hope so!”

One of the chief changes made from the novel to the series was the switching of British Intelligence agent Burr from a male to a female character. For Bier “Part of it was updating it. Part of it was the fact that by updating it we could take it out of the sort of public school white heterosexual world and maybe actually have a bit of the diversity which is where the world is actually at.” And of the brilliant Olivia Colman, the director added: “And she was absolutely the right choice for it!”

With Tom Hiddleston‘s Pine reporting to Olivia Colman’s Burr, I wondered if the actor saw a pattern of his recent projects whereby his characters’ fate was in the hands of his strong female leads (Such as Jessica Chastain in Crimson Peak or Tilda Swinton in Only Lovers Left Alive) . Hiddleston—who, it must be said gave thoughtful answers to the entirety of this NYC press line— took some time to reflect on those roles before answering  “I haven’t thought about it consciously in the work. I mean…it seems very true to life, doesn’t it? For men to be in relationship to women? [laughs]” He paused again, “I don’t know that they are, how was it you phrased it? Their ‘fates were in the hands of women’–it’s an interesting interpretation!…It rings true to me that each character would have specific relationships to women, but I would never—I would have to think about it longer to think of it whether his fate were in their hands…It is a new interpretation and I’m not disagreeing with you. My point is I think everyone is responsible for their own actions and that responsibility in each of those characters is shared out. I think Pine’s responsible for what he does and he would never discredit Burr by saying that [the mission] was her idea. He does things on his own volition that he’s responsible for and Pine’s fate is in Pine’s hands.”

As for looking back on his recent characters, he did stipulate: “The only instance who I would say that you brought up is [Crimson Peak’s] Thomas Sharpe who is governed by a very toxic relationship with his sister and out of the sense of duty and codependency he feels trapped. But again, his fates not in her hands, I just would question…I suppose I’m being pedantic about phrasing. But I think everyone’s fate is in their own hands.”

Hiddleston not only stars in “The Night Manager” but he took on the more demanding role of executive producing as well which he “loved,” adding “It recomitted my engagement with the material in a very serious way. I loved the extra responsibility. Responsible for the story, for the script, for the thing running on time and it just gives you greater–to me–the extra responsibility made me give even more commitment. So yeah, hoping there will be more of that.”

The Night Manager premieres tonight at 10pm on AMC.