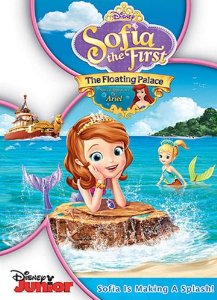 Ever since “Sofia the First” premiered last year it has taken over and quickly has become a favorite among the preschool – kindergarten age group. My 16 month old daughter absolutely loves this show and cannot get enough of it. Whether it comes to the show, the music, toys and also books, we have been eating up as much as we can get. “Sofia the First: The Floating Palace” is the second book in the series and another great installment in the series.

If you like “Sofia the First”, then like myself you have been seeing commercial of “The Floating Palace”, which airs on Disney Junior on November 24th and is the show’s first ever prime-time special. I am sure that it is only the first of many more amazing specials to come. The premise takes place during Sofia’s family vacation on a floating palace, Sofia befriends a mermaid, and through their friendship she helps save the mermaid’s kingdom and brings their two worlds together. Like the last book the illustrations are fantastic and overall Disney Press has delivered another impressive book.

This book also brings has a special appearance from Disney Princess Ariel from “The Little Mermaid”. My daughter has been watching “The Little Mermaid” on Blu-ray about five times a week since it recently came out on Blu-ray and this book couldn’t come at a more perfect time. She immediately was screaming at the book “Ariel” and “Fia” (as she called Sofia). It was super cute and I know that this is going to become a must read daily! Can’t wait to see what Disney Press has planned next for this series. 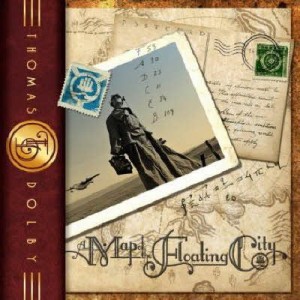 “She Blinded Me With Science”.  It’s a song that is included on so many greatest hits of the 80’s compilations that one could easily view Thomas Dolby as being the definitive MTV one-hit wonder boy in an era known for flash-in-the-pan artists.  But to know Dolby only for “Science” is to ignore a career that includes five albums that consistently explored a broad range of musical styles and thematic content .  And then, after 1992’s “Astronauts and Heretics”, he effectively disappeared.

“A Map of the Floating City” – Dolby’s first album of original material in 20 years – finds him once again refusing to be tied down to any one genre of music.  And, for the most part, it works so well that it’s hard to believe he’s been absent for so long.  On it, he combines two of his innate abilities – instrumental virtuosity in a wide variety of genres and superlative storytelling .  Biographical in nature, the album itself is comprised of three musical novellas: “Urbanoia”, “Amerikana” and “Oceanea” and while the album as a whole is cohesive as a complete work, the mood varies as each of its chapters unfold.

The four songs that comprise “Urbanoia” are easily the most brash.  The opener, “Nothing New Under the Sun”, with its staccato snippet lyrics, anchoring drum line and guitar accentuation, is as close as “Floating City” gets to including a straightforward rocker.  Although not mind-blowing, it’s a solid track that serves to whet the palate.  Similar in its simplicity, “A Jealous Thing Called Love” plays as an upbeat version of “I Scare Myself”, a Dan Hicks crooner classic that Dolby covered on 1984’s “The Flat Earth”.

But not everything that Dolby touches turns into sonic gold.  “Spice Train” is the City’s most synth-laden resident.  It’s fun but by the time the ever-clever Dolby tries to prevent the track from succumbing to being a mere piece of danceteria fart-funk fluff by infusing it with wafting eastern-derived musical strains, it’s been derailed by its own popish simplemindedness.  “Evil Twin Brother” is basically Sting’s “An Englishman in New York” after it’s been seduced by the dark side.  Edgy and occasionally dissonant, it’s the first track where we hear Dolby’s unflappable ability to tell a vivid story through simple imagery but the herky-jerky alternating musical dynamics are so jarring that the song itself winds up being the album’s weakest link.

The mid-section of the album demonstrates Dolby’s ability to roll the dice by working in multiple musical genres and repeatedly coming up a winner – although, lyrically, he always seems to bet on black within “Amerikana” as the stories always have a somber tone either consistently throughout or as a sudden turnaround at the song’s end (in the case of “Love is a Loaded Pistol”, said weapon winds up being an actual firearm).   Even “The Toad Lickers”, a country/bluegrass romp that would make any good ole’ boy jingle and jangle his spurs, can be seen as a biting satire of pugnacious backwoods culture.  The epic “17 Hills”, featuring guest guitarist Mark Knopfler of Dire Straits, finds everything that works well within the boundaries of “Floating City” in perfect harmony.  Playing like an everyman drama in three acts, Dolby’s songwriting talents in tandem with his ability to evoke emotion through music have never been better displayed than within this lover’s tale of a jailbreak gone wrong.  It’s a story so engrossing it would even cause the ever-esteemed master of melancholy, Richard Thompson, to shed a tear.

“A Map of the Floating City”s final destination is the often tranquil “Oceanea”.  In the sub-section’s title track, Dolby creates an atmosphere so lush and soothing that one cannot help wanting to stay there longer than its short three-minute runtime allows even if his lead vocal is drenched in the most overused and annoying vocal effect in recent memory, Auto-Tune – something that was not true of the track when it was included on the “Oceanea” EP that was released earlier this year.  Why the track has been modified in this way for the full-length album is as mysterious as the Bermuda Triangle.  It’s still a great song, though, and the guest vocals by Eddi Reader send it soaring.

The remaining tracks, “To the Lifeboats” and the Brazilian-flared “Simone”, are fine examples of Dolby’s ability to generate great music in a myriad of styles.  The mid-section of “Lifeboats” rocks out so hard with power chords and fuzzbox vocals that it’s easy to visualize Dolby himself clad in heavy metal garb while a small Stonehenge monument slowly descends into his recording studio.  But in its closing third, the song settles into the quieter aural landscape that makes the album such a worthwhile journey.  The roads through Dolby’s “Floating City” aren’t completely devoid of potholes but when it truly sails, it’s poetry in motion.

“A Map of the Floating City” will be released on October 25th, 2011.
For more information about Thomas Dolby, visit www.thomasdolby.com