A new puppy may be topping the kids wish list, but is the family not quite ready for the real thing? Young children and parents alike will love the irresistible personality of Peppy Pups from TPF Toys, the official plush dog of National Mutt Day, coming up this Friday, December 2nd.

Peppy Pups™ brings to life the authenticity of puppy friendship, complete with a pup that follows its owner everywhere.    The cuddly plush puppy has a spring in its step and when walked by its owner, can run, jump and wag its tail like a real dog.

Brimming with personality and no batteries needed, Peppy Pups have ultra-soft fur, distinct paw pads and springs in their feet that help these eager Peppy Pups move and prance, just like a real dog.  Peppy Pups bounce, jump and waddle as they go for “walks” with their kid owners, and turn heads as they go. Peppy Pups adore cuddling, snuggles and squeezes, showing characteristics of a real dog that all pet lovers embrace. 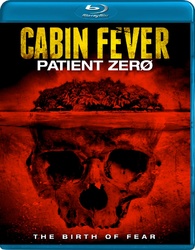 “Cabin Fever” is a great horror film and it also kick started the career of Eli Roth. The sequels/prequels to this film have been very good at all. In fact, they have been pretty bad. “Cabin Fever 2: Spring Fever” was such a bad film, it was delayed for year and even had the director Ti West trying to take his name off of it. “Cabin Fever: Patient Zero” was the first of two planned prequels to reinvigorate the series, but it falls flat just like the sequel and it’s follow up film was canned already. Maybe they need to let this series die and come up with a new idea instead of just rebooting the same thing over and over. The film does have some great gore in it, kudos to that but it drags ass half way through and has no major shock factor at all. Just another unnecessary prequel. Big pass here!

Offical Premise: A group of friends planned the perfect vacation in the Caribbean, but when they head ashore to explore a remote island, their ultimate bachelor weekend devolves into their worst nightmare. After an ill-fated swim in contaminated water, they stumble upon a seemingly abandoned research facility where a deadly, flesh-eating virus has been unleashed. In the aftermath of a massacre, the only people left alive are a handful of secretive medical personnel and “Patient Zero” (Sean Astin), the lone person who’s been exposed to the disease and shows no symptoms. Can they find a way to survive and escape, or will the virus consume them all in a bloodbath of chaos and carnage?

RLJ Entertainment released this film as a combo pack with a Blu-ray and DVD included. “Cabin Fever: Patient Zero” does look quite impressive with its 1080p transfer. The practical makeup effects looks great for sure and the locations were the film was shot are also well highlighted. The DTS-HD Master Audio 5.1 track is also solid especially with composer’s Kevin Riepl (Silent Night) score, which is quite rocking. In more disappointing news, if the film wasn’t bad enough there are literally no special features included on this release at all. There are trailers for “Aftermath”, “All Cheerleaders Die” and “Wolf Creek 2” at start up but nothing else. 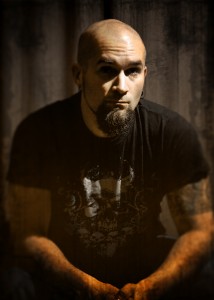 Kevin Riepl is the composer of horror films like “Silent Night”, “Contracted” and a segment from “The ABC’s of Death”. His latest film is the horror/thriller “Cabin Fever: Patient Zero” directed by Kaare Andrews (Altitude and The ABCs of Death) and staring Sean Astin (The Lord of the Rings Trilogy), Currie Graham (Pompeii, NYPD Blue), Ryan Donowho (Soldiers of Fortune), Mitch Ryan (One Tree Hill) and Jillian Murray (Bad Ass). Media Mikes had a chance to chat with Kevin about the score and working in the horror genre.

Mike Gencarelli: How did you get involved to score the film “Cabin Fever: Patient Zero”?
Kevin Riepl: I met the director, Kaare Andrews, when we worked together on his contribution to THE ABCs OF DEATH, “V for Vagitus”. When I heard he was selected to helm CABIN FEVER: PATIENT ZERO I was eager to have a chance to work with him again. Likewise for Kaare, so we submitted my reel to the producers and once they were on board, we were all set to go.

MG: Did you look back at the previous two films for any ideas?
KR: I refreshed myself a little bit with the first film’s score. As much as we wanted to create something new, we also wanted to carry over some of the ‘rawness’ of Nathan Barr’s score and incorporate a lot of scratching and dissonance in the string instruments.

MG: What was your biggest challenge you faced with this film and was this score unique in any way from your previous scores?
KR: I think the main challenge on the film (even though it wasn’t really a big challenge) was coming up with and deciding on the palette for the score and what style would best support the story and its setting. I do believe this score is unique from any of my previous scores and that is because this film is different from previous films I’ve scored. Yes I’ve scored a decent amount of horror and thriller, but each of those has been artistically different from each other as well. A film’s story dictates the sound and style of the score. If you look back through my previous films many of the scores are quite different and unique to the film. That’s the ultimate goal – to give each film its own sound. Of course it is a collaborative effort with the director since it’s their vision, but I try to bring ideas to the table that will help their vision stand out and be that much more unique.

MG: You have worked in the horror genre before with projects like “The ABCs of Death” and “Silent Night”; what do you love about the genre itself?
KR: It’s usually dark, gritty and fantastical. Ever since I started music at a young age I’ve always wanted to explore the darker side of music, melody and sounds. As much as I love writing all styles of music, it seems that the horror genre lets me experiment a little more when writing scores. Being a creative person, how can I pass that up?

MG: “Contracted” was a sick film BTW; tell us about your process for this film?
KR: CONTRACTED, indeed, was sick and A LOT of fun to work on. Eric England is a young director and has so much to offer the film world. It was great to work with him on this film. At the very start, Eric knew he didn’t want traditional ‘horror’ music. So we approached the score with a synthetic, almost ethereal sound to help support the main character’s innocence and naiveté, until of course things start to go south. At that point I start to include more grit and experimental sounds and rhythms to help throw the viewer off balance so they can feel as much angst as the main character does as she goes through her changes.

MG: How is it going from scoring video games to TV or film? Which is more challenging?
KR: I don’t find it to be challenging. It’s all music. Yes, there are specifics and deadlines you need to be concerned about during the process of creating for each medium, but in the end it’s still about coming up with ideas and you’re still supporting story and visuals. The most important thing and it is sometimes a challenge, is scheduling…especially when you have a video game, a TV show AND a film on your plate.

MG: What else do you have in the cards coming up next?
KR: I just recently completed the action thriller THE NIGHT CREW directed by Christian Sesma. Hopefully I will have more news concerning the release of the film and an official soundtrack. Other than that, I am currently working on Ubisoft’s and Signal Studios’ TOY SOLDIERS: WAR CHEST video game as well as a small independent feature.

Twentieth Century Fox Home Entertainment brings the party to the people with its cross country RIO 2 Summer Party Tour. Families will have plenty of reason to shake a tail feather down to the tour; it’s full of interactive activities for all ages including portable viewing stations to watch soccer games, live from Rio; screenings of RIO 2; Samba performances and lessons; customizable Carnival masks; soccer challenges, and much more! All guests can also turn their fun into a global sensation by joining a cross country karaoke   from the party via the sing- and dance-along photo booth.

With the Blu-ray/DVD and Digital HD release right around the corner, Fox Home Entertainment will bring the party from the Amazon this summer with a bunch of family-friendly fiestas across the country. You can find the Summer Party Tour any time of day, check out pictures from the tour, follow the GPS enabled tour bus, and explore all sorts of RIO 2 goodies at www.rio2summertour.com.  Follow the tour on social media with #rio2summertour.