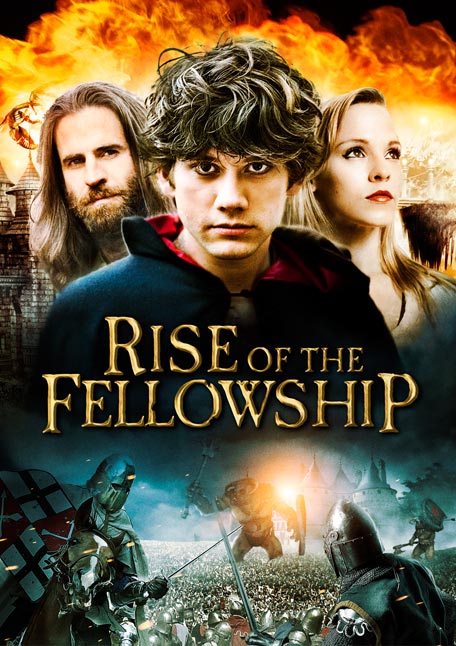 As JRR Tolkien fans the world over await the upcoming release of “The Hobbit: The Desolation of Smaug,” Phase 4 films has released the highly anticipated love letter to Tolkien, the new comedy “Rise of the Fellowship.”

Starring Justin Moe, Emma Earnest, Alyssa Jacobsen and Cole Matson, the film follows a group of “The Lord of the Rings” fans on an amazing and amusing journey. Similar in tone to the popular “Star Wars” themed “Fan Boys,” the film was written with online gamers and Tolkien fans in mind.

The DVD is now available at Amazon.com and Walmart via Vudu and can also be obtained via iTunes.

August 28th brings the first time that Peter Jackson’s visual masterpieces have been available seperately on Blu-ray. I have always had a special place in my heart for “The Fellowship of the Rings”. There has been some talk about the the transfer on this extended edition, but I never had a problem. Warner Bros issued a response that this film was remastered from the original 2K digital production files in order to reproduce the full color imagery of the feature. If you are looking to experience this film solo from the rest of the series, I would recommend purchasing this release.  To be honest the real selling point for me is the Ultraviolet digital streaming copy available.

This film is just breathtaking on Blu-ray both visual and audio. The 1080p transfer is beyond presistine and presented in an aspect ratio of 2.40:1. The DTS-HD 6.1 ES sound is beyond amazing and is perfect for a good surround sound system. When I think of film that need to be watching on Blu-ray, I can’t help but thinking about this franchise. The film is released in five-disc set with two 50GB Blu-ray discs and three DVDs.  Also included is features from BD-Live.  I know we experienced the same thing with the “The Lord of the Rings Motion Picture Trilogy” last year but all of the special features are still on DVD, which is a little disappointing to me personally but obviously they make up for the fact since there are three jam-packed discs with extras.

In this first part of the Trilogy, the young hobbit Frodo Baggins inherits a ring; but this ring is no mere trinket. It is the One Ring, an instrument of absolute power that could allow Sauron, the dark Lord of Mordor, to rule Middle-earth and enslave its peoples. Frodo, together with a Fellowship that includes his loyal hobbit friends, humans, a wizard, a dwarf and an elf, must take the One Ring across Middle-earth to Mount Doom, where it first was forged, and destroy it forever. Such a journey means venturing deep into territory manned by Sauron, where he is amassing his army of Orcs. And it is not only external evils that the Fellowship must combat, but also internal dissension and the corrupting influence of the One Ring itself. The course of future history is entwined with the fate of the Fellowship. The film won four Oscars® for Best Visual Effects, Cinematography, Makeup and Original Score.

The 5-disc Extended Edition of “The Fellowship of the Ring” includes all of the special features that appear on its 2002 DVD release, in addition to filmmaker Costa Botes’ 85-minute documentary, which was previously only available as part of the Limited Edition DVD release. There are four commentary tracks on this release each one is equally good and one is not better than the next. I would like to say it says something for everyone, whether it be explanations from the director, to effects background to cast stories.

Disc 3 • The Appendices Part 1 From Book to Vision: Peter Jackson introduces the Extended Edition • JRR Tolkien: Creator of Middle-earth (provides background on the series’ author) • From Book To Script • Visualizing the Story • Designing and Building Middle-earth (Focuses on the development & construction of the various sets and locations that appear in the film) • Middle-earth Atlas Interactive Map • New Zealand and Middle-earth Interactive Maps.

Disc 4 • The Appendices Part Two From Vision to Reality: Focuses on film’s principal photography with an Introduction by Elijah Wood • Filming The Fellowship of the Ring (88 minutes documentary including revealing string of candid stories, scene preparations and camera crews setups) • Visual Effects (creating scale, shooting forced perspective scenes, designing and building incredible miniatures and dazzling audiences with in-house visual effects by Weta Digital) • Post Production: Putting It All Together (focuses on the film’s editing process) • Digital Grading • Sound and Music (showcases the film’s sound design, original mix, sound effects and ADR, and Howard Shore’s score) • The Road Goes Ever On… (Jackson reflects on “The Fellowship of the Ring” post)

Disc 5 • Behind-the-Scenes Documentary Created by Filmmaker Costa Botes during filming of
The Lord of the Rings: The Fellowship of the Ring (More overview of the production but from a stand back point of view, runs 85 mins)