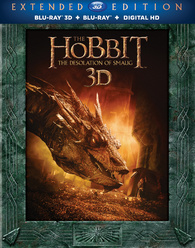 If you are a fan of Peter Jackson, then it is no surprise that he is a big fan of releasing extended cuts of his films. “The Hobbit: The Desolation of Smaug”. The new Extended Cut includes 25 minutes of additional content that extends individual scenes making this a must see for fans of the film. Sone extras scenes include much more of Mirkwood, as well as more of Dol Guldur and Thranduil and of course, more Stephen Fry, who is just simply awesome…amongst much more. This film is no question of my favorite films of last year and only gets better with each viewing. This 5-disc 3D Extended Edition also includes more than nine hours of new bonus features. This should at least hold you off until “The Battle of Five Armies” hits theaters this December!

Official Premise: The Hobbit: The Desolation of Smaug continues the adventure of the title character Bilbo Baggins as he journeys with the Wizard Gandalf and thirteen Dwarves, led by Thorin Oakenshield, on an epic quest to reclaim the Lonely Mountain and the lost Dwarf Kingdom of Erebor. Having survived the beginning of their unexpected journey, the Company travels East, encountering along the way skin-changer Beorn and a swarm of giant Spiders in the treacherous forest of Mirkwood. After escaping capture by the dangerous Wood-elves, the Dwarves journey to Lake-town, and finally to the Lonely Mountain itself, where they must face the greatest danger of all–a creature more terrifying than any other; one which will test not only the depth of their courage but the limits of their friendship and the wisdom of the journey itself–The Dragon Smaug.

Warner Bros is bringing this film home with a combo pack including a Blu-ray 3D + Blu-ray + UltraViolet Digital HD copy. Like the previous Blu-ray release for “The Hobbit: The Desolation of Smaug”, the Extended Edition is no different. I enoyed the 3D in “The Hobbit: An Unexpected Journey” but this film really shines with the added effect. The scale of the film is so large and Smaug is just a cinematic marvel. If you watch this film, especially the Extended Edition, I would absolutely recommend doing it in 3D. The 1080p transfer is simply outstanding, as is the DTS-HD Master Audio 7.1 surround track. Easily, this is one of the best Blu-ray presentations that I have seen all year.

The Extended Edition extras include a new audio commentary track with Director/writer/producer Peter Jackson and writer/co-producer Philippa Boyens discussing the new cut etc. “New Zealand: Home of Middle-Earth, Part 2” features Jackson and his team traveling through the film’s locations. “The Appendices Part 9 & 10” is the next two installments in Jackson’s sprawling “Appendices” documentary showcase this massive production. Combine these extras with the special features that were included in the first release of “The Hobbit: The Desolation of Smaug” on Blu-ray and we finally got a winning package here.

The other extras include: “Peter Jackson Invites You to the Set” is a two part look into the behind-the-scenes on this production. There are four Production Videos featurettes including “Introduction to Pick-Ups Shooting,” “Recap of Pick-Ups, Part 1,” “Recap of Pick-Ups, Part 2″ and “Music Scoring.” “Live Event: In the Cutting Room” is a recording of the March 2013 worldwide live event where Jackson answered fans questions and gave a tour of his production facilities. “New Zealand: Home of Middle-earth, Part 2″ gives a follow up look into the locations. Lastly there are Trailers & Previews and Music Video for “I See Fire” by Ed Sheeran.

The Hobbit: The Desolation of Smaug Extended Edition, a production of New Line Cinema and Metro-Goldwyn-Mayer Pictures, the newest epic in The Hobbit trilogy arrives on Blu-ray 3D™ and Blu-ray™ November 4th from Warner Bros. Home Entertainment. The Extended Edition features a 25-minute longer cut and more than nine hours of new special features.