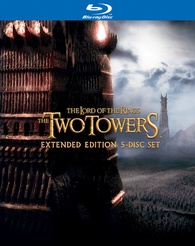 August 28th brings the first time that Peter Jackson’s visual masterpieces have been available seperately on Blu-ray. “The Two Towers” is the middle child in a threesome of amazing film. Though it doesn’t mean it is not as amazing as the ones to come before or after it. There is no mistaken that this release is the absolute best presentation you are going to get out of this film. If you are looking to experience this film solo from the rest of the series, I would recommend purchasing this release. To be honest the real selling point for me is the Ultraviolet digital streaming copy available.

This film is just breathtaking on Blu-ray both visual and audio. The 1080p transfer is beyond presistine and presented in an aspect ratio of 2.40:1. The DTS-HD 6.1 ES sound is beyond amazing and is perfect for a good surround sound system. When I think of film that need to be watching on Blu-ray, I can’t help but thinking about this franchise. The film is released in five-disc set with two 50GB Blu-ray discs and three DVDs. Also included is features from BD-Live. I know we experienced the same thing with the “The Lord of the Rings Motion Picture Trilogy” last year but all of the special features are still on DVD, which is a little disappointing to me personally but obviously they make up for the fact since there are three jam-packed discs with extras.

In their parallel journeys, the Fellowship will stand against the powerful forces spreading from the Two Towers — Orthanc Tower in Isengard, where Saruman has bred a lethal army of 10,000 strong; and Sauron’s fortress at Barad-dûr, deep within the dark lands of Mordor. The Lord of the Rings: The Two Towers culminates in the astonishing battle for the refuge, Helm’s Deep, the Kingdom of Rohan’s ancient large stone fortress, besieged by Uruk-hai warriors. The film won two Oscars: Best Sound Editing and Best Visual Effects.

Like “The Fellowship of the Ring”, the Blu-ray edition of the “The Two Towers” also bares all of the special features that appear on the 2003 Extended Edition DVD, and then some. Also like the first film, the feature-length documentary from filmmaker Costa Botes, which was previously only available as part of the Limited Edition DVD release. On the commentaries, Jackson and his co-writers are very thorough and extremely engaging. The actors give cool stories and are funny to listen to. On the design and production teams, they are incredibly detailed and specific. Again a little bit of something for everyone.

Disc 3 • The Appendices Part 3: The Journey Continues • Peter Jackson Introduction • JRR Tolkien: Origin of Middle-earth (more about the book’s author) • From Book to Script: Finding the Story • Designing and Building Middle-earth • Gollum (divided into “The Taming of Smeagol” which focuses on Gollom from drawings to sculptures to maquettes to Weta Digital CG to Andy Serkis’ performance. “Andy Serkis Animation Reference” is a before-and-after comparison sequence. “Gollum’s Stand In” shows co-producer Rick Porras’ work as Gollum for a day) • Middle-earth Atlas Interactive Map • New Zealand as Middle-earth (A collection of short featurettes)

Disc 4 • The Appendices Part 4: The Battle for Middle-earth • Elijah Wood Introduction
• Filming The Two Towers • Visual Effects (examines three aspects of the production — “Miniatures” to “Weta Digital” which tracks the insertion of CG into the film, and “Abandoned Concepts” reveals two sequences that never happened) • Editorial: Refining the Story (Jackson talks about his collaborative edit) • Music and Sound • The Battle for Helm’s Deep is Over… (a look into the post-production period and on wards to “Return of the King”)

Disc 5 • Behind-the-Scenes Documentary Created by Filmmaker Costa Botes during filming of The Lord of the Rings: The Two Towers (another behind the camera look at the production but like “Fellowship” from a fly-on-the-wall perspective, runs 106 minutes).