Having a 20 month old daughter, our family is quite the fan of “Sofia the First“. She has been watching the show since she was 8 months old and stops everything she is doing when it comes on. We also have first “Sofia the First” CD in our record player non-stop and she loves the music (as do I). “Sofia The First: Songs from Enchancia” includes 15 songs from from the first season of the Disney Junior TV Series. The album also includes a bonus song, “Be Who You Wanna Be”, which was a big summer hit and features Jake from “Jake and the Never Land Pirates”) and four karaoke instrumental tracks for kids to sing-along to. If you are a fan of this show then this CD is a must have. My daughter has had it on loop since we received it and I have a feeling we are going to burn it out quickly!

Season one has brought us so many great songs including “Good Little Witch” and “Bring My Best Friend Back” (which is such a great duet). I also love that there are three tracks with classic Disney princesses included as well. “The Love We Share” features Ariel, “Ride of Your Lives” features Jasmine and “Make it Right” features Belle. I love all three of these tracks and so glad that they made it onto this CD. Disney has a gold mine with this show and I love how they try and blend in classic Disney characters as well without being cheesy or overwhelming! Can I suggest a duet with Rapunzel next? My daughter will flip out! One track that I realized was missing was the holiday special song “Wassailia”. I can’t wait to see what season two holds for this show.  I am sure the music is going to be so great and I look forward for Disney Junior to release future song collections in the coming months! 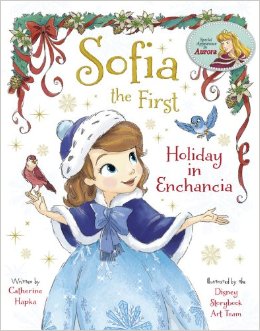 “Sofia the First” is easily my favorite children’s television show on TV and Christmas is my favorite time of the time. Put the two together and we have a match made in heaven here with “Sofia the First: Holiday in Enchancia”, which is the latest book in the series from Disney Press. I really hope that Disney Junior is also planning on turning this story into a TV special like “Sofia the First: The Floating Palace”. This book is a perfect way to get in the mood for the holiday season. It blends the wonderful feeling of the holidays with the charm of “Sofia the First”.

The story focuses around a snowstorm that prevents King Roland from returning home in time for the holidays. Sofia leads her family on a brave expedition to find him, and shows Amber that spending the holiday with loved ones is better than any present. Containing the tradition with the last book, this one includes a very special appearance by Princess Aurora from “Sleeping Beauty”. Like the past books as well, this is wonderfully illustrated and really captures the holiday spirit.

Once thing that I realized is that this book is actually quite smaller than the first two installments in this series. I am not sure why Disney Press decided to take that route but to be honest, I like the smaller format much more. This book comes out in late October and will give parents plenty of time to pick up and spread some holiday joy to the family. I think I enjoyed this book as much as my daughter did (but I am also an old softie when it comes to the holidays). Keep them coming Disney Press, I can’t wait to see what you have planned next for this series!