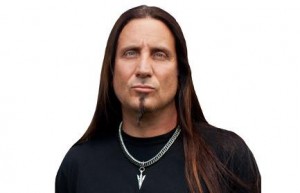 Jesse James Dupree is chainsaw wielding front man of the rock group Jackyl who have been terrorizing stages around the world since the early 90’s. Jesse also appears on the popular TruTV series “Full Throttle Saloon” which documents the venues daily operation during the annual Sturgis Motorcycle Rally which is held yearly in the black hills of South Dakota. On August 22-24 “Throttle Fest” which features elements of the television show and live musical acts rolls in to Kansas City for what could be the events biggest show to date. Media Mikes caught up with Jesse recently to discuss all things Throttle.

Adam Lawton: Can you give us an overview of “Throttle Fest” which kicks off on August 22nd?
Jesse James Dupree: We have been taking “Throttle Fest” all over the country. In May we were in Myrtle Beach and then in June we were in Chicago. From there we go to Sturgis and after that wraps up we will be in Kansas City starting August 22nd. I think that show is probably going to be the biggest “Throttle fest” we have ever done. On the entertainment alone for this fest we have a million dollar budget. It’s going to be a huge gathering and in all honestly I think people are going to make a pilgrimage to Kansas City that weekend. I have actually challenged the people of Kansas City to show off and bring all their friends and relatives. You can always count on Kansas City to come out and support an event like this.

AL: How involved are you in the production and logistics of these events?
JJD: I am more hands on with “Throttle Fest” than I am at the place in Sturgis. I kind of take the lead on pulling things together. I sort of pulled Michael and Angie in to this kicking and screaming because Sturgis takes so much out of them. I am able to go up and have fun during Sturgis while they are working 24/7.

AL: Do these live events feature all the things we have seen on the television series?
JJD: You will see everything from the “Globe of Death” to motorcycles being ridden on high wires to the Flaunt girls and the Rockstar bar tenders. Everything you see, smell and touch will be “Full Throttle”. We have been doing events like this even before we had the television show so with the success of that it was a no brainer to start doing more of these so people who couldn’t make it to South Dakota could still get the chance to experience what it’s like to attend one of our events.

AL: Can you give us some background on how the show initial came about?
JJD: I had executive produced other television shows and I was the one who put this package together and brought it to the network. I was the one who told them this needed to be a television show. For every one person that goes to Sturgis there are a thousand at home who go vicariously through the show. It took a couple years to find a network that understood what we were doing but once we put it in the can and the TruTV saw it they got it right away.

AL: Jackyl are on the bill for this show but will you guys be doing any other shows throughout the summer?
JJD: We are out there touring every week. I just got back from Nashville and I will be heading out to Iowa and Indiana. People can check out www.jackyl.com for a full list of dates because we will be everywhere.

AL: Do you find it hard balancing all the different aspects of your career?
JJD: I wake up every day and take a big bite out of life’s ass. I am a blessed guy in that everything I do is energetic and I try not to over think things. These things all come from an organic place and weather your talking to the guy on the television, the stage or the guy holding the bourbon you’re getting the same guy.

AL: Do you have any other plans or projects in the work?
JJD: Jackyl has started working on some new material as that’s something we will always be doing. We start filming for the new season of the television show in a couple of weeks and that will air in November.

Monique Dupree has been in over 60 films including “American Gangster”, “Life Support”, “The Replacements”, “Satan Hates You” and “Bikini Bloodbath Christmas”. She also worked as a comicbook model as well for “Gingerstein: Rise of the Undead. Dupree also known as “Tha Original Gata™ and is the lead singer of a band named Negro Childe. Movie Mikes had a chance to chat with Monique about her career and her upcoming films.

Mike Gencarelli: Have you always been a fan of the horror genre?
Monique Dupree: Yes I have. I wasn’t allowed to watch horror growing up. So I would sneak and watch anyway. I think part of the allure of it all started out being that I wasn’t allowed to watch. Then when I able to watch, it just stuck with me. I love everything about the horror genre, from old school horror, to slashers and everything in between.

MG: I read that you have done five films while pregnant, tell us about this?
MD: Well honestly, bills still have to be paid even when you’re with child, lol. I was blessed to have people that still wanted to work with me while I was pregnant. I had one film that I did while pregnant when I was running through the woods in red lingerie. THAT, was interesting.

MG: Do you have favorite role that you have played?
MD: Yes, my favorite role to date is Oria from “Shadowhunters 2: Oria” (which is not out yet). It took a long time for me to prepare for that role and my character was a snake demon, so she had no dialogue. She had to speak through body movements and emotion of the eyes and such.

MG: What has been your most difficult production to work on?
MD: I would have to say the above as well (“Shadowhunters 2: Oria”). One of the things I love about it so much was that the character was so difficult for me. I was also on set for a month which was pretty tough to handle especially being away from my children so long.

MG: Tell us about your work as a comic book model?
MD: Well, I’ve done quite afew things to date, but my most satisfying has been playing Edie Van Horn in “Gingerstein: Rise of the Undead”. I read comics, so to be a comic book model is a dream come true. I also LOVE working with the fabulous Dennis Willman. His artwork is INSANE.

MG: Tell us about some of your upcoming projects?
MD: I’m working on the upcoming film “Girl Scout Cookies”, “Alien Vengeance 3-D”, “Wade” and a TV show called “The Bronx Flavor” are just a few.