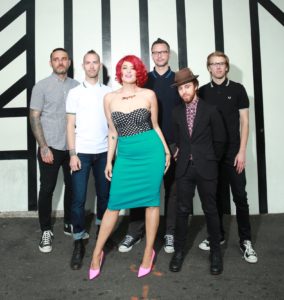 Monique Powell is the lead singer of the Orange County ska-punk band Save Ferris. After a 15 year break the band is set to release a new EP in February titled “New Sound” and embark on a US tour also starting in February. Media Mikes had the chance to speak with Monique recently about the bands return, their pledge music campaign and about working with producer John Avila.

Adam Lawton: Can you give us some background info on the reformation of the group in 2013 and leading up to where the group is now in 2016?

Monique Powell: In 2012, I was diagnosed with a degenerative spine condition that had caused irreparable spinal cord damage in my neck. I was told by doctors that, without emergency surgery I could eventually lose my ability to walk. The catch was that, the surgery I needed was typically performed from the front of the neck, an issue that would have prevented me from ever singing again. I had one doctor say to me “Do you want to sing or do you want to walk?”. At that point, I became determined to find a doctor that could perform the surgery I needed through the back of my neck, a procedure considered far more dangerous, painful, and with far more required rehabilitation. The minute before I went under anesthesia for the difficult surgery, I decided I was going to bring Save Ferris back if I woke up from the procedure with my ability to walk and my voice intact. This is what led to the reincarnation of Save Ferris in 2013. I had to relearn how to hold my head up, how to do simple tasks with my arms, and through it all, I had Save Ferris and the fans to aim for. The response to the shows in 2013 was so positive, I decided to bring us back for good!

AL: What was it like heading back into the studio after being away from that process for so long?

MP: At first, scary. I didn’t eat for days prior due to nerves but then something happened and the magic of John Avila filled the studio, and, I settled in beautifully. It was as if a day hadn’t gone by.

AL: How did the relationship with producer John Avila come together?

MP: John produced the first Reel Big Fish album which was the first album I ever sang on when I was about 19 years old. We had a great time recording “She Has a Girlfriend Now” for Reel Big Fish and I never forget John’s kindness and calm demeanor. When I was shopping for producers for my new stuff, John’s name came up, and I thought, “how crazy would it be if this all came around full circle”. So I scheduled a meeting and here we are.

AL: Can you tell us about the pledge music campaign that is happening around the new EP?

MP: Well, being a band that was virtually inactive for so long, I had no idea how I would finance a new album. Thanks to Pledge and our fans, this new album has been made possible. It has been really fun, we had a studio party with our fans that donated to be on the record it was an epic night for all of us.

AL: Can you tell us about the upcoming tour and what other plans you and the band have for 2017?

MP: The band and I are all so excited to be finally touring together. It really is a dream come true for us, and I cannot believe it is actually happening. I’ve worked so hard for 3 years to make this possible. As for 2017, after we release the EP early in the year, and the 6 week Fall tour of North America, we will continue working on a full length album. If all goes as planned, we will release the full length prior to our 2017 summer tour so fingers crossed!

For more info on Save Ferris and a complete list of tour dates visit http://www.saveferrisofficial.com/ 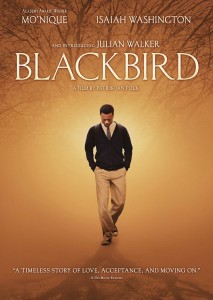 Media Mikes has teamed up with RLJ Entertainment to give (2) of our readers a chance to win a DVD copy of the new film “Blackbird,” starring Academy Award winner Mo’Nique, Isaiah Washington and Julian Walker.

All you have to do is tell us below which Academy Award winning actor you’d like to see more of on the big screen. This is Mo’Nique’s first film since winning the Oscar five years ago for her work in “Precious.” Who else needs to return to the big screen?

(2) random entrants will be chosen and will receive a DVD copy of “Blackbird.” This contest runs through Sunday, August 23rd. Winners will be notified by email. Good luck!

SYNPOSIS
Seventeen-year-old Randy tries very hard to be a good person. Since his father left, Randy takes care of his emotionally disturbed mother, and he’s the kind of friend all of his classmates can depend on. As strong as he seems on the outside, Randy is hiding a secret inner struggle and denial of his true self. It’s not until he opens himself up to love that he discovers that becoming a man means accepting who you really are.

Monique Dupree has been in over 60 films including “American Gangster”, “Life Support”, “The Replacements”, “Satan Hates You” and “Bikini Bloodbath Christmas”. She also worked as a comicbook model as well for “Gingerstein: Rise of the Undead. Dupree also known as “Tha Original Gata™ and is the lead singer of a band named Negro Childe. Movie Mikes had a chance to chat with Monique about her career and her upcoming films.

Mike Gencarelli: Have you always been a fan of the horror genre?
Monique Dupree: Yes I have. I wasn’t allowed to watch horror growing up. So I would sneak and watch anyway. I think part of the allure of it all started out being that I wasn’t allowed to watch. Then when I able to watch, it just stuck with me. I love everything about the horror genre, from old school horror, to slashers and everything in between.

MG: I read that you have done five films while pregnant, tell us about this?
MD: Well honestly, bills still have to be paid even when you’re with child, lol. I was blessed to have people that still wanted to work with me while I was pregnant. I had one film that I did while pregnant when I was running through the woods in red lingerie. THAT, was interesting.

MG: Do you have favorite role that you have played?
MD: Yes, my favorite role to date is Oria from “Shadowhunters 2: Oria” (which is not out yet). It took a long time for me to prepare for that role and my character was a snake demon, so she had no dialogue. She had to speak through body movements and emotion of the eyes and such.

MG: What has been your most difficult production to work on?
MD: I would have to say the above as well (“Shadowhunters 2: Oria”). One of the things I love about it so much was that the character was so difficult for me. I was also on set for a month which was pretty tough to handle especially being away from my children so long.

MG: Tell us about your work as a comic book model?
MD: Well, I’ve done quite afew things to date, but my most satisfying has been playing Edie Van Horn in “Gingerstein: Rise of the Undead”. I read comics, so to be a comic book model is a dream come true. I also LOVE working with the fabulous Dennis Willman. His artwork is INSANE.

MG: Tell us about some of your upcoming projects?
MD: I’m working on the upcoming film “Girl Scout Cookies”, “Alien Vengeance 3-D”, “Wade” and a TV show called “The Bronx Flavor” are just a few.