Tommy Wiseau is the director, producer, writer and star of the cult classic film “The Room”. Since the film was released back in 2003 it has achieved “Rocky Horror” like fame playing to midnight screenings non-stop to a huge fan base. Some called the film one of the worst ever made but true fans see “The Room” for what it really it, which is fun! The film was parodied live by the Rifftrax gang last year and is heading back to theaters again on January 28th, 2016. Media Mikes had a chance to catch up with Tommy again to discuss “The Room”, James Franco playing him in “The Disaster Artist” film adaptation and what else he is currently working on.

Mike Gencarelli: Tell us how you feel about “The Room” being parodied by Rifftrax Live?
Tommy Wiseau: Yeah they reached out to me about a year ago about doing it. I liked what they did, I mean, I don’t support parts of it 100%, but it does show how fun “The Room” is. People take things too serious and the film isn’t made to be serious, it is made to be fun. If you haven’t seen the Rifftrax Live version of “The Room” in theaters, I would recommend it highly when it comes around again January 28th, 2016. And bring a big group of friends with you as well.

Mike Gencarelli: The film has been out for 13 years now, are you ever taken back by the continued interested in it year after year?
Tommy Wiseau: Yes, I am still surprised. I am happy that people are still talking about it and still seeing it in theaters. I also have been working a few new projects as well that I am excited for fans of “The Room” to see as well. I love touring with the film across the country. I usually show “The Room” and an episode of “The Neighbors” as a double header. It is a lot of fun to do and also getting to interact with the fans.

Mike Gencarelli: Last time we spoke back in 2011, you mentioned you were planning a 3D release for “The Room”; can we expect that soon?
Tommy Wiseau: Yeah that is something that I have wanted to do for a while. Making a film into 3D is definitely not an easy process. So yes, I still want to release “The Room” in 3D, but right now I am not sure if I want to reshoot the entire film in 3D or just convert it. But I am definitely still planning and exploring my options. Right now James Franco is making his film of “The Disaster Artist”, so I will let him have that and then I will focus more on the 3D after it is released.

Mike Gencarelli: Speaking of that, tell us about your feelings on James Franco playing you in the film adaption of Greg Sestero and Tom Bissell’s book “The Disaster Artist”?
Tommy Wiseau: I think James is one best actors in the business. I feel good that someone like him is playing me. Of course, I also feel a little like they are taking something away from me since it is based around my life and my movie. I hope that this is a big success for James since then in return I think it will also then bring more people to “The Room” and that’s good.

Mike Gencarelli: Exactly, I think that this will put your film back in the spotlight and also introduce it to a new audience…
Tommy Wiseau: Yes, exactly. I am hoping about that. James and his brothers are doing a very good job so far and I am excited to see it when it comes out later this year.

Mike Gencarelli: Do you have any involvement or input on the upcoming film?
Yeah James did speak with me about the role and I gave him some tips. My life is very complex but I believe he will do a good job. I also have a small part in the film as well, which is cool.

Mike Gencarelli: Did you enjoy playing the villain Linton Kitano in newly released “Samurai Cop 2: Deadly Vengeance”?
Tommy Wiseau: It is always great to play a villain, I loved it. This film was a very fun experience for me I can tell you that.

Mike Gencarelli: Your TV series “The Neighbors” has aired 6 episodes on Hulu; any plans for more episodes on that format?
Tommy Wiseau: Yes! Currently 6 episodes have aired on Hulu and the fans really have been excited about what we have so far. I am currently working on another 6 episodes for Hulu. We have been also exploring releasing the episodes in animated format as well. So that is something that we were trying and it also getting a good response. I hope to have the next 6 episodes on Hulu by the end of 2016.

Mike Gencarelli: You did a Reddit AMA last year where you mentioned a new project called “The Foreclosure”, what can you tell us?
Tommy Wiseau: Yeah that is a project that I am currently working on as well as “The Neighbors”. “The Foreclosure” focuses on the housing market right now and looks into the current situation that we are facing today with people not being able to pay for their houses and being forced to foreclose. It is a current topic. There is also another project that I have that is currently untitled but that I cannot talk about right now…maybe in about 3-4 months, I can. But a lot of very excited stuff coming up for my fans! 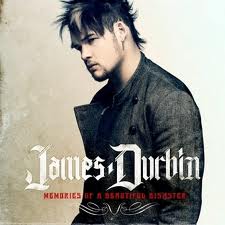 “Memories of a Beautiful Disaster” is the first release from American Idol: Season 10 contestant James Durbin. The album is being released via Wind-Up records and features 11 original tracks produced by Howard Benson. The iTunes digital version of “Memories of a Beautiful Disaster” features two additional bonus tracks not included on the CD release.

Not being a fan of “American Idol” I am at times a little unfamiliar with those involved with the show. In this case I had heard of James Durbin but I still wasn’t too sure what to expect from his album. Upon my first listen I was immediately drawn in. “Memories of a Beautiful Disaster” features a collection of songs in a variety of styles all of which seem to really fit Durbin’s voice perfectly. Tracks such as “Everything Burns” the hard rocking “Higher Than Heaven” and “Outcast” featuring Motley Crue guitarist Mick Mars were definitely personal favorites. The album has a great flow while showcasing producer Howard Benson’s keen ear. Fans of “American Idol” will definitely want to pick this album for their collections. While those not familiar with the show or with James’s work will also want to check this album out as it really is great piece of work and has a little something for everyone.

Also be sure to check out our interview with James Durbin located in the interview portion of the site.

In this doomsday comedy, four couples who meet for Sunday brunch find themselves stranded in a house together as the world may be about to end. When Tracy Scott (Julia Stiles) decides to introduce her new beau Glenn (David Cross) to her three friends Hedy (America Ferrera), Emma, and Lexi and their significant others, her biggest fear is whether or not her friends will approve of her new relationship, little does she realize that’s the least of her worries.  Before long the couples find themselves in the midst of an apocalyptic disaster, catching them all off guard. One thing is clear; these four couples aren’t going to let the potential end of the world get in the way of the relationship issues they all need to work out.

“It’s A Disaster is a razor sharp comedy, that is a great addition to our international line up” states Elias Axume, President, International Distribution for Maya Entertainment. “The chemistry between Julia Stiles, David Cross and America Ferrera will have international audiences laughing out loud.”

The deal was negotiated by Elias Axume and Tonantzin Esparza, Director of Acquisitions, on behalf of Maya Entertainment, and ICM, which packaged the film and continues to represent North American rights.  “It’s A Disaster” is the second film for Vacationeer Productions, headed by Kevin M. Brennan and Jeff Grace. “Vacationeer Productions is excited and proud to partner with Maya on this deal.  Maya’s track record of successful sales and international relationships will create the highest viewership possible for It’s A Disaster.”

Maya International will be handling international sales at AFM 2011. Visit Maya Entertainment in suite 721 at the Loews Hotel Santa Monica, from November 2 – 9 or email JackC@maya-entertainment.com.

MAYA ENTERTAINMENT | www.maya-entertainment.com
Based in Los Angeles, Maya Entertainment Group, Inc. is an independent multi-platform content and distribution company that has established itself as the leader of media product that appeals to the “new mainstream” of American Latino and Multi-cultural audiences.  Led by entertainment industry pioneers, Moctesuma Esparza (Selena, Gettysburg) and Jeff Valdez (Sí TV, QuePasa.com), Maya Entertainment produces, acquires and distributes entertainment programming and has established a library of over 100 titles, which are available at retail, for rental, and on VOD through Time Warner Cable, Comcast, iN DEMAND, and TVN.