Will Ash is the lead guitarist for the Los Angeles based metal band The Crown Remnant. The five piece band which also includes vocalist Geordy Shallan, guitarist Jorge Lopez, bass guitarist Josue Lara and drummer Art Ramirez is set to release a brand new album on January 18th titled “The Wicked King: Part II”. Media Mikes had the chance to speak with Will recently about the albums concept, its creation and what the band has planned for the New Year.

Adam Lawton: Give us a little background on the band if you could?

Will Ash: Los Angeles is kind of a funny place. Everyone has their own things going on so you tend to explore a lot of different avenues when you are trying to be creative out here. I think we are lucky in this band as we have a bunch of guys who are all adventurous enough to want to try a number of different things such as theater, comedy, stunt work and pod-casting. Being that we all come from these different areas of entertainment we are able to use those different experiences to help us create this music. The band sort of started when our singer Geordy came into where I teach guitar lessons. We started talking and had some of the same ideas. He and I coming together kind of solidified the start of The Crown Remnant. The name was already in place and everything so from there we started to audition people. We reached out via Facebook and a bunch of other avenues to get the lineup that we have now.

AL: The new album is titled “The Wicked King: Part II”. Can you tell us about that and how you built on the concept established from the first record?

WA: This was a good creative experience. I like music that is thematic and records that keep a theme throughout the individual tracks. We actually wrote part 1 and part 2 in tandem with one another. We started with a very wide perspective. We knew we wanted an album that was cohesive from the first track all the way to the last track. From there we chose to do a split release. Part 2 is the answer to the call sounded by part 1. The first record has a brighter more idealistic approach and this new album is the antithesis of that. It’s a little crazier, a bit darker and somewhat bigger.

AL: With both records being written at the same time how did you decide what songs went where?

WA: That was a question that went through all of our brains for quite some time. Initially we were very starry eyed and wanted a full 13 track release. The more we thought about it the more saw the benefits two releases could bring. We wanted to keep things consumable so the decision to do two releases was really the first decision we made. From there it was just a question of what songs were going to make it into the records. We looked at the concepts and ideas of each song to see where they would best fit. Geordy and I do a lot of writing together and each of our writings comes out in a certain way. I think that was a big help also when it came time to split things up.

AL: You also score music for video games. How did the writing of this record compare or contrast to that of your game work?

WA: I love video games! It does end up being a little different. I get very excited when I have the chance to mix in more orchestral pieces with the type of music we play in this band. I am very much in to symphonic music so to be able combine these styles is very enjoyable. When I sit down and work on game pieces I am looking a whole different set up instrumentation. Fundamentally things are the same when it comes to writing however beyond the basics there tends to be much more going on within the game pieces. It becomes a different task in that the playing style is more emotive. With the band I have to balance things to be able to include a vocalist and different percussive elements so you have to look at how you approach things to ensure you achieve the feel you are looking for.

WA: We are certainly going to be out there! We are very excited to get out there on our first tour. We have not been around very long as a band so it’s a nice feet to be able to string together a multi-state tour. The tour kicks off January 23rd and I believe runs through Mid-February. The record releases on January 18th so it’s going to be a great time to be out there supporting the record. I am looking forward to being out there on the road with my buddies playing music and eating junk food. Hopefully we will be able to get the band’s name out there more help generate some excitement around this new record.

AL: Do you have any other projects outside of the band we can also be watching for?

WA: I try to stay busy as much as I can. Being a young guy I try to juggle quite a few things at one time. I am at the point now where I am very driven so there is not just one project that I am working on right now that I can announce. I do have one project I am heading which falls more on the composing side coming out soon. More details on that should be coming out after we get done with this first run of shows.

For more info on The Crown Remnant you can check out their official website at www.crownremnant.com 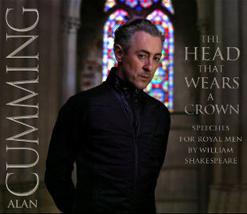 I have been a huge fan of Alan Cumming for as long as I can remember. I can still recall the day I saw him (and met him) on Broadway for the first time dating back to “Design for Living” in 2001. He has such a wonderful presence about himself. When he speaks his lines, they come with such delivery and purpose. It does help that he also has a bitchin’ Scottish accent. So what is better than having the internationally acclaimed actor and Tony Award Winner to do a spoken word CD of the “best of” works of Shakespeare. These monologues include 22 of Shakespeare’s most well-known and loved moments. Alan is no stranger to Shakespeare having starred in Julie Taymor’s film version of “Titus Andronicus” and also his one-man show of “Macbeth”, which he currently stars on Broadway. He delivers Shakespeare’s words so flawlessly and with such force that he knocks it out of the park track after track.